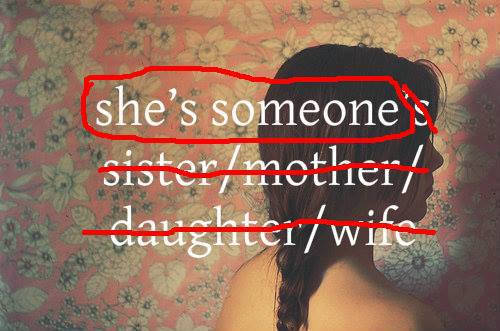 “Because society is more comfortable with people telling jokes about rape than it is with people revealing they’ve been raped.”

That statement is one of many tweets from the #YesAllWomen Twitter campaign, a collection of cries that began after the recent shooting at University of California Santa Barbara. The world discovered that the shooter, Elliot Rodger, posted a video explaining why he killed six unsuspecting people. And what exactly led this 22-year-old man to commit such a horrible act, one that disrupted and devastated his community?

He never got laid.

Rodger expressed anguish over his years of loneliness and “unfulfilled desires,” and blamed women for rejecting him even though he’s the “perfect guy.” Many women were horrified by Rodger’s attitude toward them and accused him (rightfully) of being misogynistic. It didn’t stop there, though. Women were also furious (again, rightfully) over some responses to Rodger’s video. More than one YouTube commenter said the government should legalize prostitution, and others instructed women to give up their p—y so these incidents don’t happen.

This anger transformed into #YesAllWomen, which women use to share stories of the harassment and discrimination they constantly experience. Some of these women are victims of sexual violence. Some are frustrated because they can’t walk alone at night or wear shorts without feeling like a target. And all of them are fed up with society’s ignorance and refusal to defend them.

Rodger inspired this dialogue because he is a real-life example of what many women fear: What happens if I tell a man “no”? Will he beat me? Rape me? Kill me? Some people may think these concerns are exaggerated, but in a society that barely understands consent and refuses to talk about sexual assault, women have no choice but to worry for themselves. And if we don’t do it quietly, we’re mocked and forced into the shadows.

That’s why #YesAllWomen is more than just “slacktivism.” It’s a chance for women to bring their concerns to the forefront and talk about the daily misogyny and instances of assault that happen in our culture. Spurred by a horrible tragedy, the Internet proved as the unlikely safe space for women to speak out. It was not an attack on all men, but an awakening of awareness for everyone.

A similar feeling swept through DePaul this spring. Students began to speak out on something that’s always been happening, but oft not spoken of — sexual assault.

When students dropped the now-infamous banners in Arts & Letters Hall in April, it got the whole campus talking. The topic of sexual assault had been whispered about, but now it was being screamed.

While some elements of the banners angered some — unfairly accusing the athletic department as a whole upset many athletes — it took the important first step in getting students talking. For days after the banners, sexual assault awareness was the topic of conversations across the university. Sexual assault was no longer a secret — it was all out in the open now.

As DePaul was getting comfortable talking about sexual assault on campus, the rest of the country was starting to as well. The first half of 2014 was riddled with reports of improperly-handled sexual assault cases at universities around the country, leading to a list of 55 colleges being announced as being under investigation for sexual assault.

But now more than a month has passed and summer is just around the corner. Like a hashtag on Twitter, all of this means nothing unless the conversation continues and people work to make change.

As you return to your home, move on from DePaul or just push campus and its issues from your consciousness for the next two-and-a-half months, don’t forget about those conversations about sexual assault. Come back in September and keep working to make things happen.

A banner, or a hashtag, changes nothing unless the conversation continues.