Men’s basketball: DePaul upsets No. 20 Seton Hall for its first Big East win of the season 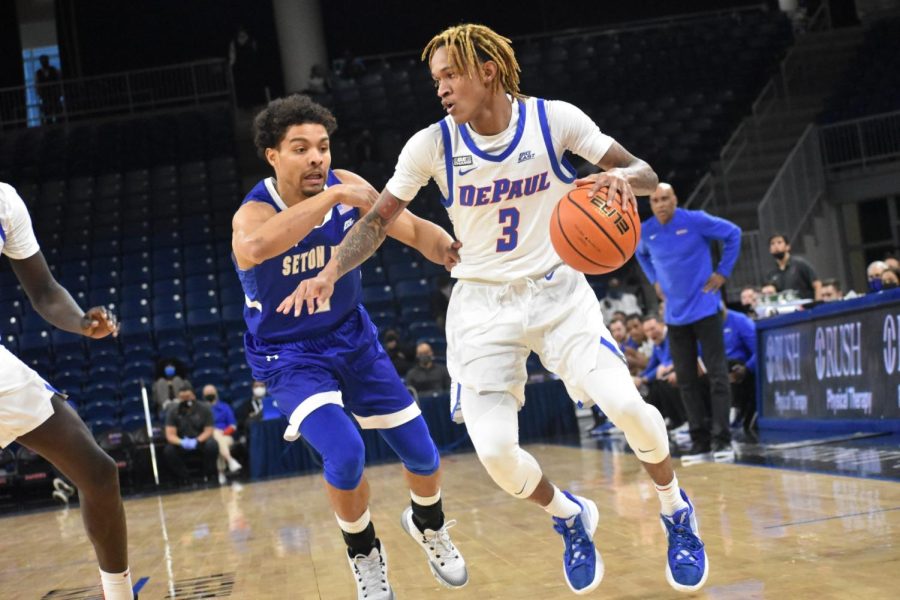 DePaul simply had to find a way to get a win in the Big East.

It doesn’t matter how it happened, it just matters that the Blue Demons got the job done after losing their first five conference games.

DePaul has had some close calls in the Big East this season, losing several games by a couple of possessions.

That changed on Thursday. DePaul found a way to close the deal in the final minute with some clutch free throw shooting from sophomore guard Jalen Terry. The Blue Demons defeated the Pirates 96-92 to secure their first win over a ranked opponent in two years.

“I’m proud of the team and the resilience that they showed in the fight,” head coach Tony Stubblefield said. “I’ve been preaching to these young men to stay together. It’s the Big East, it’s a tough league. Night in, night out it’s going to be a war.”

DePaul controlled much of the game against Seton Hall, but things got tricky when the Blue Demons’ leading scorer Javon Freeman-Liberty suffered a groin injury early in the second half. He didn’t play in the final 16 minutes of the game.

Terry and sophomore forward David Jones stepped up in Freeman-Liberty’s absence. The duo combined for 52 points for the game, including 34 in the second half.

“We lost a couple of games by a couple of possessions, and we had to learn from the mistakes,” Terry said. “But the win feels good.”

Terry, in particular, helped secure the win for DePaul by knocking down eight consecutive free throws in the final minute. The Blue Demons were seemingly heading to a comfortable victory after Terry hit a jump-shot to put his team up 87-76 with under a minute to play, but the Pirates made it a rough 56 seconds for DePaul.

Seton Hall started to put some pressure on DePaul when it was inbounding the ball, which forced a couple of turnovers from the Blue Demons. The Pirates twice pulled the game within two points, but both times Terry would respond by hitting two free throws.

DePaul ended up shooting 36-of-45 from the free-throw line, one of its best performances from the charity stripe this season. After the game, Terry said that Stubblefield made the team shoot 50 free throws in practice on Wednesday.

Terry finished with a career-high 28 points on 7-of-14 shooting. Jones added 24 points and eight rebounds in one of his better performances of the season.

Even though DePaul allowed 92 points on Thursday, 16 of them coming in the final minute, Stubblefield was pleased with how his team fought on the defensive end.

“We gave up too many points [on Thursday] but we did a better job of getting down and getting stops and being more connected defensively,” Stubblefield said. “… But our guys did take away some things and did a good job on the boards.”

DePaul had 10 steals and seven blocks against Seton Hall, nine more than it had against Marquette.

DePaul also had its highest-scoring first half of the Big East season. The Blue Demons poured in 52 points on 45.9 percent shooting from the field, while the Pirates only scored 35 points.

“Today was a day to step up as a team and that’s what we did,” Jones said.

Freeman-Liberty led the way in the first half with 12 points on 5-of-9 shooting. Yor Anei made his second start of the season as Nick Ongenda still recovers from a wrist injury. Anei scored 11 points on 9-of-12 shooting from the charity stripe.

DePaul improves its overall record to 10-6 and is now 1-5 in the Big East.

The Blue Demons get a couple of days off before No. 17 Xavier visits Wintrust Arena.