The 2014 Big East Champions DePaul will travel to Madison, Wisc. to take on the 2014 Big Ten champions Wisconsin Badgers in the first round of the NCAA Tournament at 7:30 p.m.

The Badgers are the No. 4 seed in the region, finishing the season 18-2-2 with a 1-0 overtime win over Iowa in the Big Ten Championship. DePaul finished as one of the two undefeated teams in the nation, coming into this match at 16-0-4 following their 2-0 win over Georgetown to win the Big East.

The Blue Demons will likely line up in the same formation that won them the Big East championship with a 4-3-3. Their front three of freshman Alexa Ben, sophomore Abby Reed and junior Elise Wyatt have combined for 32 goals and 22 assists on the year.

Senior Amber Paul, who was named Big East Championship Most Valuable Offensive Player, will provide some attacking sense in the midfield while freshmen Lucy Edwards and Jessica Weaver will act as possession winners in front of the back line. 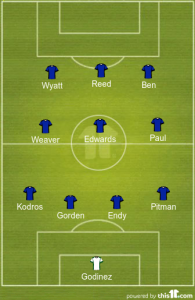 Seniors Rachel Pitman and Nina Kodros will provide some offense down the flanks at wingback while Sarah Gorden and freshmen Elizabeth Endy will stay home to defend the middle of the back line.

Wisconsin was able to beat the Hawkeyes with a 4-4-2, allowing sophomore Rose Lavell to control the attack from the midfield alongside junior Kinley McNichol. They have two dangerous forwards in seniors Kodee Williams and Cara Walls, who have seven and 12 goals respectively.

Junior McKenna Mueur and freshman Becca Harrison will help screen the back line in the midfield, leading to a physical battle for the ball between the two sides.

The Badgers’ back line, which allowed only seven goals on the year, is going to be a tough wall to break for the Blue Demons. Led by senior Alexandra Heller, DePaul’s strong attack will have to play at the top of their game to break through the Badger’s defense. 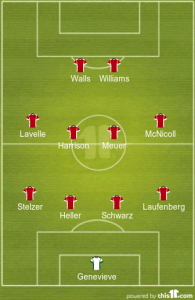 DePaul can win this game by neutralizing the wings and winning the battle in the midfield. The fullbacks Pitman and Kodros will have to do a good job of shutting down Lavelle and McNicoll, thereby not allowing any service to get through to the forwards.

Another important battle will be Edwards and Weaver winning possession in the midfield. If they can keep the ball in the Blue Demons’ possession, they should be able to rely on the three forwards to give the Badgers’ defense fits.

Wisconsin can win this game by either catching Pitman or Kodros too far forward and scoring on counterattacks or by forcing the DePaul fullbacks to play more defensively, neutralizing the DePaul attack.

The Badgers have a strong enough defense that if they are able to control the possession and not allow the strong attack of the Blue Demons to get past their defense they should be able get a goal through.

Despite being undefeated, DePaul will be the underdog as they head into the match against Wisconsin. According to Elise Wyatt, the mentality suits them well.

“Every time we’re in a situation where we’re expected to lose, we step up,” she said. “We prove them wrong and show them they shouldn’t have those expectations of us.”

DePaul does come into this game with some NCAA experience, falling in the 2013 first round to Indiana.

“I think having the experience of being in the NCAA tournament last year will help,” Chastain said. “It’s nice to have done that last year and all year we’ve talked about doing program firsts and this group has really stepped up to those challenges.”

Wisconsin returns to the tournament after missing it in 2013. They lost to UCLA in the first round in 2012.

The winner of the game between DePaul and Wisconsin will face the winner of University of Central Florida and Georgia on Nov. 21.