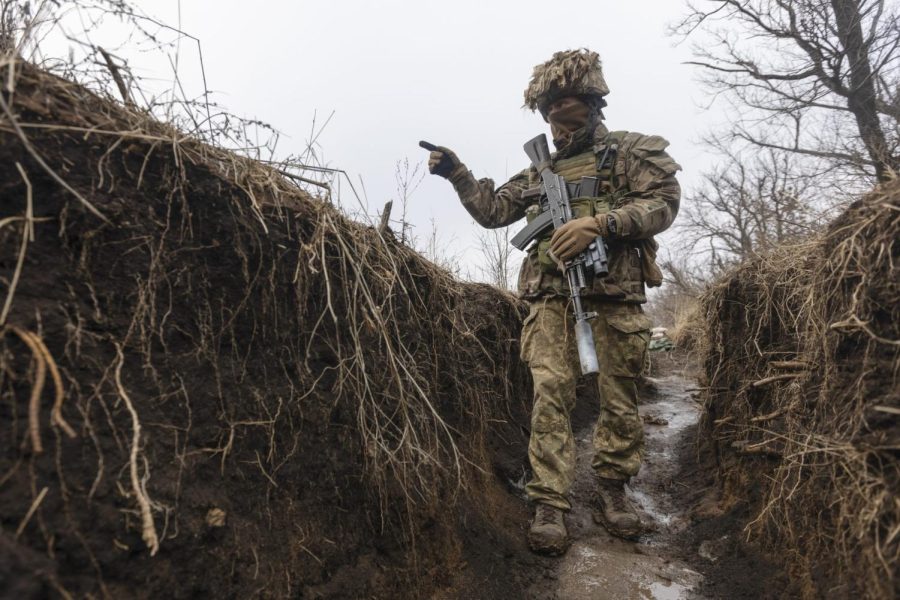 A Ukrainian soldier walks in a trench at the line of separation from pro-Russian rebels, Donetsk region, Ukraine, Monday, Jan. 10, 2022. (AP Photo/Andriy Dubchak)

As military tensions build between Russia and Ukraine, so do questions over whether an attack is imminent.

Currently, over 127,000 Russian troops stand guard near the Ukrainian border, according to the Ukrainian Defense Ministry. Russia has been gradually evacuating its Ukrainian embassy since the beginning of January. The British government on Saturday accused the Kremlin of plotting to install a pro-Russian government in Ukraine. And on Jan. 13, a top foreign official in Russia floated the idea of dispatching military infrastructure to Venezuela or Cuba if tensions with the U.S. over these measures rise.

Whether these statements and actions serve as ploys or preparation is anyone’s guess, but the prospect of a Cold War-esque proxy war has not gone unnoticed by the international world. The U.S. has threatened to impose a dizzying array of financial, technology and military sanctions against Russia if it were to invade Ukraine, adding that Washington would arm Ukrainian insurgents against a Russian occupation if necessary.

To understand how this conflict has spiraled into what it is today, you’d have to look back to 1990 —before the Russian Federation even existed.

In Feb. 1990, U.S. Secretary of State James Baker and Soviet leader Mikhail Gorbachev met to discuss what NATO’s role would be in the then-newly unified Germany. According to Russian officials, this conversation included a verbal agreement that NATO would not expand into Eastern Europe. According to the U.S., no such promise was ever made. These two fundamentally contrasting positions have largely defined Russia’s relationship with NATO since the dissolution of the Soviet Union.

“The Russians have made clear what they want,” said David Gibbs, history professor at the University of Arizona. “And what they want is enforcement of the 1990 agreement, an iron-clad promise not to incorporate Ukraine into NATO. The U.S. has flatly refused to consider that, at least publicly. They insist Russia has no say over whether Ukraine joins NATO or not. The Russian position is, the U.S. had already agreed to this in 1990, and they just want the U.S. to enforce that prior agreement.”

Since 1999, 14 Central and European nations have joined NATO. And in 2008, the alliance’s Secretary General stated that Ukraine would one day become a member as well, further infuriating Russian officials as the alliance’s borders drew closer to the Kremlin and solidifying a tense relationship between the two former Soviet states.

David Marples, Russian history professor at the University of Alberta, suggests the presidency of Joe Biden — and a perception in Moscow that he may be less inclined to promote NATO expansion as previous administrations — as a possible reason for Russia’s recent provocations along the Ukrainian border.

Marples also notes that Russian President Vladimir Putin might view a successful attack on Ukraine as an opportunity to deflect attention away from rising unrest in and around Russia, including recent protests against pro-Russian governments in Belarus and Kazakhstan, as well as domestic concerns over Moscow’s handling of the Covid-19 pandemic, in which the country has seen its largest ever population decline during peacetime.

“Putin sees this going on all around,” Marples said. “He sees these as Western-inspired uprisings or mass protests against the leaders, but against him personally to ultimately undermine his regime in Russia. Some kind of foreign success, in the past, has gotten Putin out of complex situations. When he annexed Crimea in 2014, it was a very popular move. His popularity went sky high after that.”

U.S. and Russian officials have met on several occasions in attempts to diffuse the conflict, but talks have continued to stall. Russia demands a ban on Ukraine entering NATO and for NATO to withdraw its forces to Soviet era borders. In response, the U.S. has repeatedly refused these proposals, referring to them as “non-starters.”

“I have a belief that this is about signaling,” Farkas said. “My sense is that any genuine military activity by the Russians in eastern Ukraine would be a disaster.”

Farkas lists several reasons as to why Russia would want to avoid armed conflict in Ukraine. For starters, he notes the impact such a conflict would have on Russia’s international image — an increasingly important factor in an increasingly globalized world.

“It would be a bloodbath on both sides,” Farkas said. “If Vietnam was bad in terms of the impact on the American public, if there were military conflict in Eastern Ukraine, the world would respond to the heinous quality of the killing, the maiming. It’d just be horrendous.”

On top of this, Russia has experienced several separatist movements within its own borders since the dissolution of the Soviet Union, with multiple ongoing calls for independence. Farkas notes that actively engaging in pro-Russian separatist movements in Ukraine’s Donbas region could consequently stir up separatist tensions within Russia itself.

“[Russia has] at least a dozen segments in its own territory in which there are pressures for autonomy,” Farkas said. “It’s got China on its border which is eager to possess some of the Russian cities in the Far East. There’s a lot of sensitivity to Russians about their own territorial integrity. If they become known as the violators of sovereign boundaries, the whole system is called into question.”

Farkas adds that even without internal worries, Eastern Ukraine would not be a particularly lucrative prize for Russia: a 2020 study estimated that it would, at minimum, cost $21.7 billion USD in order to repair damages caused by the separatist war in Donbas.

“What would a Russian middle-level leader think about the Russian system investing in the Donbas when it’s not agreeing to invest in a part of the Russian federation that exists today?” Farkas said. “The implications are dramatic, and there’s a ripple effect. The bottom line is, they don’t have resources just to piss away. And the Donbas would be a sucking pit into which they’d have to throw massive amounts of resources.”

Former U.S. Army brigadier general and former defense attaché to Russia Peter Zwack believes that Moscow agrees an invasion of Ukraine would be foolish. However, he worries that Russia may have played its hand too far just to fold.

“The Russians have boxed themselves in — they’ve been so aggressive that they’ve almost put themselves into a point of no return,” Zwack said. “I think there’s a bunch of [Russian officials] who feel they’ve taken this about as far as they can go, but they can’t back out now. So there’s a very real fear that they double down.”

As is the case with conflicts between nuclear powers, Zwack notes that with any move against one another, both the U.S. and Russia risk catastrophic consequences.

“I worry very much about an accident, an incident or a provocation in these highly tense, distrustful times, where decision cycles are much shorter than they used to be,” Zwack said.

While the world waits, Ukraine and the U.S. prepare.

In Ukraine, government and private military groups have begun combat training civilians in the event that the Ukrainian military falls — a result that even the country’s commanders expect in the event of a Russian invasion. And in the Southeastern U.S., the CIA has been covertly training Ukrainian paramilitaries as well, according to Yahoo! News. Whether Ukraine will need these measures is to be seen.

“The Russians are at the brink right now,” Zwack said. “They have the option to jump into the void or not. They’re going to have to figure out a narrative, and the West needs to give them a way to ease back out of this without giving up our principles. We’ve got to find a way.”