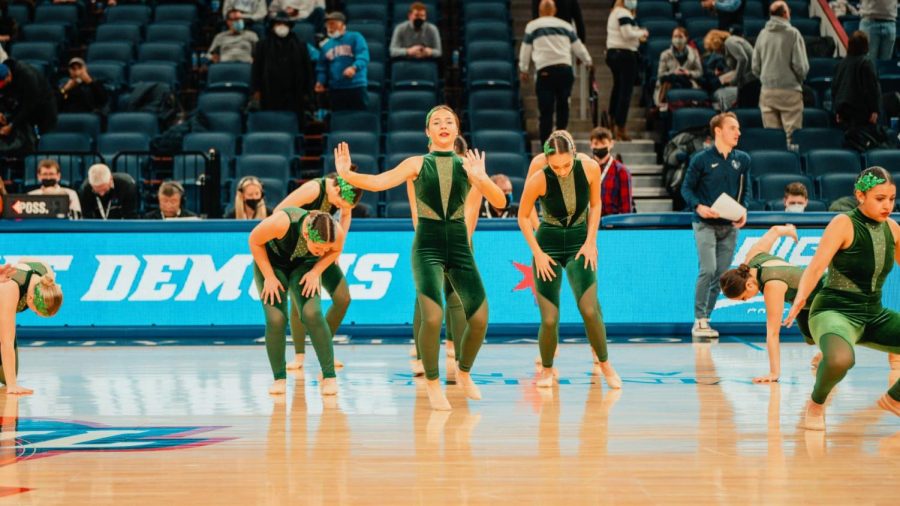 The DePaul dance team performing at halftime of the DePaul men's basketball game on Jan. 19.

In the midst of coordinating a busy DePaul basketball schedule, the DePaul dance team placed 20th at the Universal Dance Associations College Nationals on Jan. 14-16. The dance team competed in the Division I Jazz performance and finished with a raw score of 96.7 and an event score of 84.087.

With consideration toward this being the first year of balancing performance practices as well as game nights, Shannon Lersch, DePaul’s spirit director, reflects happily on their success and is open to a bigger future of Nationals.

“Last year, our first competition was a smaller setting with Covid regulations and restrictions for a lot of schools,” Lersch said. “This year, I feel like it was our first time really stepping into that giant world of competition. They got their feet wet and I can only see much more growth in the future.”

Last year the dance team placed 5th in the nation for Division I jazz at UDA — a huge triumph for their first time ever competing and a milestone toward a new chapter for the program.

Toren Ives, a junior at DePaul who’s been on the dance team all three years, felt this year was their actual first time of really competing, since last year didn’t include other variables like basketball games or competition size.

“Covid changed a lot for us including the fact we didn’t have games, obviously. So we tried out with Nationals last year because we didn’t have anything else,” Ives said. “That was our very first time competing at DePaul, a couple years previous they did NDA nationals but it was our turn to introduce ourselves and decide if this was something as a whole team we wanted to continue.”

Performing their jazz routine during halftime of the men’s basketball game against Xavier on Jan. 19, fans got a chance to show appreciation for the hard working spirit squad. For most students on the team, dancing has been a part of their whole lives and didn’t want that to end when they chose their university.

Marissa Cooper, a senior on the DePaul dance team, majors in mathematical science and decided to continue her career in dance at college.

“I’ve been dancing since I was 5, [I did] studio and dance in high school,” Cooper said. “When I came here I just couldn’t imagine not dancing. So it’s just been a wonderful experience meeting a lot of people being involved with the college and just being at all these events.”

While the competition only lasts for one weekend every year, the team’s schedule is filled with practices and basketball games. Everyone on the team is only allowed to miss two basketball games the entire season and are expected at every practice including over the summer training and recruiting for the next year.

Ives majors in film with a concentration in editing. On top of school and dance she also works a part-time job as a hostess. Ives says one of the hardest things about dancing in college is the time management.

“I would say a general schedule for me is class during the day with practice from 6 to 10 p.m. some nights. On nights I don’t have practice, I work, but when you add in games, that usually happens at least twice a week,” Ives said. “Sometimes we have games on days we also have practice, so it’s a full day of just dance.”

While the dance team is appreciative of the growth in recognition the past years from DePaul, many hope this is just the beginning for the connection between the team and its classmates. DePaul University has a specific struggle of a large commuter base, making the task of maintaining school spirit just a little harder.

While both Cooper and Ives are grateful for the positive environment at DePaul, they wish the student body would recognize all the hard work the dance team does for school spirit.

“I would just say, like, our main goal is to like entertain and to make it look easy,” Cooper said. “Basically, we just want everyone to have like fun at the games and come on out and support us and support the teams.”

“We worked really, really hard. I think if people saw us in practice, they’d think differently,” Ives said. “I’ve done so many sports and dance has always been the hardest thing I’ve ever done physically, mentally and financially.”

While the team isn’t getting paid, the spirit director brings up the importance of intentional community with a shared love.

“They love the aspect of performance and showcasing their talents,” Lersch said. “DePaul unfortunately doesn’t have a major or minor in dance, so this gives a lot of dancers who came to DePaul because of an educational focus, the ability to still do something that they love and they’ve excelled in throughout their lives.”