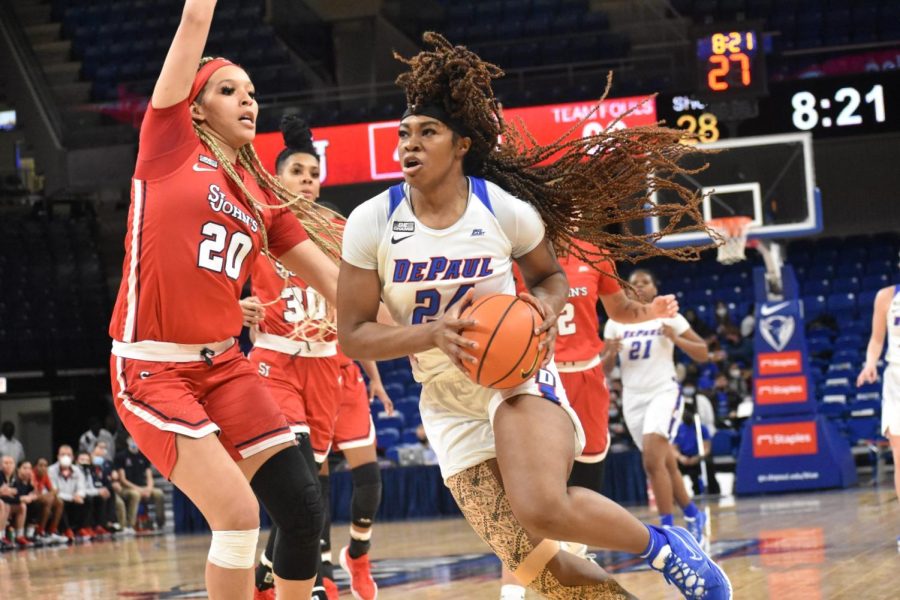 DePaul women’s basketball hosted alumni night on Friday night, featuring previous Blue Demons and recognizing them as they walked across the court at Wintrust Arena during halftime of the team’s 94-88 win over St. John’s.

Most notably to recent DePaul fans, Chante Stonewall, notorious for her clutch, go-ahead shot in the 2018-2019 Big East championship to defeat Marquette, was present for the night.

“The beauty of this program is we get alumni out here just about every night,” head coach Doug Bruno said. “It actually becomes harder for Taylor (Stapleton) and administration to put together alumni night. We already have five to six players coming next Friday night.”

The Blue Demons always stick together. Against St. John’s, that became the main theme, as the team stared at a potential two-game losing streak stemming from their loss to No. 10 ranked UConn on Wednesday night. But, they didn’t allow themselves to slip against St. John’s, who now holds a 6-13 record (2-7 in conference), as the Blue Demons won 94-88.

Even while St. John’s hung around for the whole game, DePaul emerged victorious on the backs of their venerable leaders and their experience.

The Blue Demons went into the last quarter tied with St. John’s, 69-69, after fighting to put them away throughout the entire game. In the fourth, sophomore guard Darrione Rogers forced a steal and fed an outlet pass to senior guard Lexi Held for an open layup to put the Blue Demons up by five points.

Between Kadaja Bailey (24 points), Danielle Patterson (20 points) and Unique Drake (16 points), the Red Storm was competitive throughout the game. However, the Blue Demons kept their leading scorer, Leilani Correa (19.4 points per game) to a lowly 10 points on 5-of-17 shooting.

Held hit a late 3-pointer to put the Blue Demons up three points – 87-84 – and keep them ahead. She ended with a season-high 24 points, dishing out an additional eight assists.

On the ensuing possession for the Blue Demons, freshman forward Aneesah Morrow, who admitted her body is “still recovering” from Wednesday’s game, drew an “and-one” foul on Rayven Peeples. Morrow put up another double-double, scoring 22 points and recording 18 rebounds.

Senior guard Sonya Morris forced a turnover on Patterson late in the game, slapping the ball out of her hands in the post. Morris flirted with a triple-double, recording 22 points, nine rebounds and seven assists.

“I enjoy the challenge,” Held said of guarding Bailey and Correa down the stretch. “They’re great players. We didn’t get the result against UConn and it came down to some defensive possessions that we could’ve handled better, so I just tried to focus more on the defensive end and it translated on the offensive end.”

The mentality and close-knit synergy kept the Blue Demons confident even in the face of danger. St. John’s made the game tough for the Blue Demons, but their encouragement and experience reigned supreme on Friday night.

“Lexi [Held] kept talking about getting a stop,” Morrow said. “Getting down on defense and our offense will come.”

“I think that’s very important tonight,” Bruno said when asked about the importance of the team’s experienced players. “There was an ability to have some confidence that comes from the confidence of having done it before. We did a lot of things that were the result of experience.”

If this game or any other comes down to the wire, Held has some advice for how to manage the pressure in the clutch, showing her experience as a senior.

The Blue Demons held onto an important win over a tough, isolation-heavy St. John’s team. They will face a team similar to that against Seton Hall on Sunday in New Jersey.