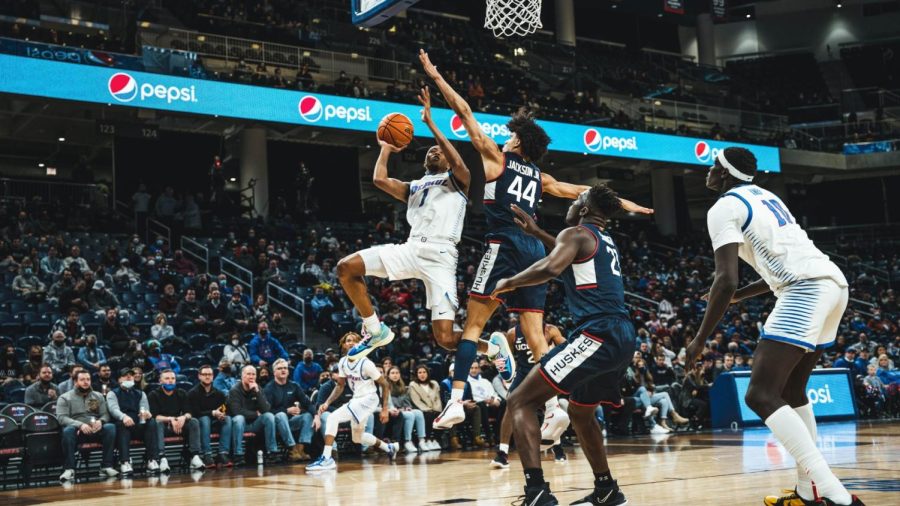 Forward Javan Johnson goes up for a layup in the second half against UConn.

DePaul men’s basketball conference game struggles continued on Saturday when they lost to UConn 57-50 to go to 1-9 in Big East play.

With top scorer senior guard Javon Freeman-Liberty out of the lineup with an injury, other players needed to step up. And on Saturday, it was graduate student forwards Javan Johnson and Brandon Johnson who led the team. Javan finished with 18 points, while Brandon had 14. However, their efforts were not enough to beat an aggressive and strong UConn team.

The game started slow for the Blue Demons as the Huskies dominated from tip-off and scored the first seven points of the game.

However, a second-chance layup by senior forward Yor Anei put the Blue Demons on the board, and Brandon Johnson immediately followed up with a 3-point jumper, putting DePaul in the game.

After the Blue Demons’ opening shot, the team began to show life, and were diving on the floor and battling for balls to secure possession. Javan tied the game at seven, before he scored a jumper to give DePaul their first lead.

DePaul continued to power ahead while playing with more energy than they had all game. The team was getting rebounds and scoring off of turnovers, and went on a 6-0 point run.

Sophomore forward David Jones added to the lead by getting his own rebound to make a second-chance layup, followed by a dunk by junior center Nick Ongenda to make the score 20-13.

However, UConn began to challenge with a point streak of their own, going 8-0 late in the first half while the Blue Demons struggled to connect on their side of the court.

The Blue Demons had too many fouls, allowing the Huskies to pull ahead with more offensive opportunities, before two free throws by Javan broke DePaul’s point drought.

A buzzer beater by the Huskies at the end of the first half pulled UConn within one point of DePaul to make the score 29-28. Brandon and Javan finished the first half with nine points each.

The second half was all UConn. While the Blue Demons were able to stay in the game, the Huskies dominated and DePaul was never able to catch up.

UConn came out flying to start the second, and took the lead with the first basket of the second half before continuing their offensive success, while the Blue Demons struggled to sink a basket in the second half.

A 3-point jumper by Javan snapped the Blue Demons’ scoring drought, but the Huskies still continued to dominate, getting rebounds and making the second-chance baskets that the Blue Demons were struggling to make.

The Blue Demons went on a stretch where the team did not score for two and a half minutes until Brandon snapped that scoring drought with two free throws, followed by two free throws by Anei to cut UConn’s lead to seven late in the game.

However, DePaul was not able to keep the ball in their end of the court for the finals minutes of the game, and UConn took advantage of that by getting rebounds and using up time with ball possession.

“I credit DePaul, those guys are athletic. Tony’s doing an unbelievable job, you know, down [Freeman-]Liberty, to put up that kind of game,” UConn head coach Dan Hurley said. “Tony’s really got some good things going here, but, [if] you play some elite defense and rebound the heck out of DePaul, you’ve got a chance to win every game you play.”

DePaul struggled with scoring, but their ability to draw fouls and sink free throws helped keep the Blue Demons in the game. The team finished the night going 16-25 on free throws.

“We’ve got to get the ball moving,” head coach Tony Stubblefield said. “We’re taking too many tough, challenging shots at certain times, shots off the dribble, and we’ve got to move the ball and continue to stay in our offense and not break down off of that, and get the best shot that we can get from our offense.”

Brandon and Anei had eight rebounds each. From the Huskies, graduate student guard R.J. Cole led both teams with 25 points.

“Javan is really coming into his own,” Stubblefield said. “He’s only been with us for about a month, a little over a month, so now he’s getting acclimated from what we want from an offensive standpoint and defensive standpoint, and he’s getting more comfortable in what we’re asking him to do. He’s only going to continue to get better.”

The Blue Demons have a week off before the team takes on Xavier on Saturday. The team then faces Georgetown at home on Feb. 9.