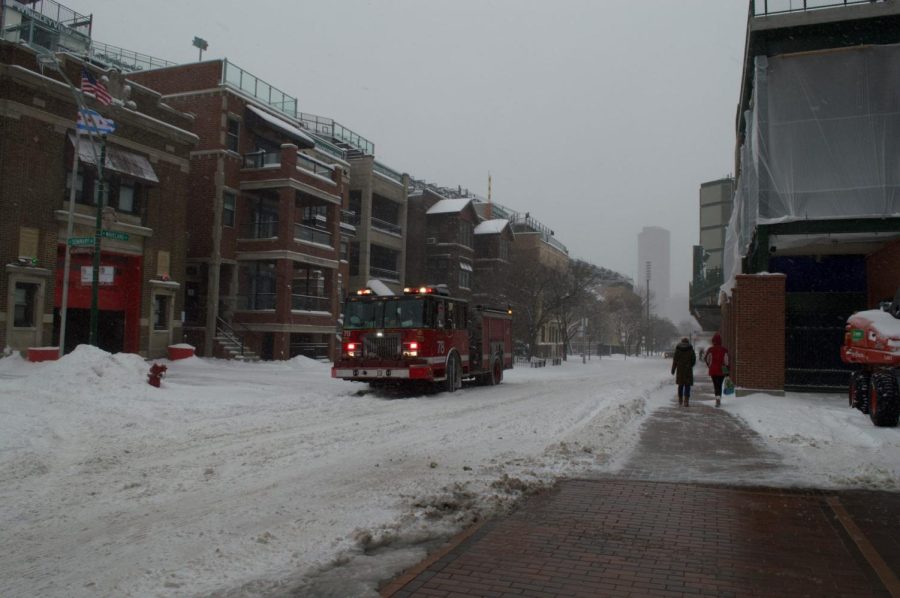 Freshman Jasmine Patel was riding the train on her one-hour and 40-minute commute to Lincoln Park from the northern suburbs when she got a notification: A required in-person class review session was suddenly rescheduled.

Patel finished her commute to Lincoln Park, but did not have a class to go to. She will have to ride down to DePaul again once her professor assigns a make-up review session.

On Tuesday afternoon, Illinois Governor J.B. Pritzker issued a disaster declaration for the entire state in preparation for the ensuing storm. As reports of a significant storm began making the rounds Tuesday evening, DePaul faculty had their own decisions to make.

In Chicago, the winter storm warning was in effect until Wednesday evening. While some parts of Chicago reported less than four inches, by 5:30 p.m. Wednesday, Chicago’s Lakeview and Lincoln Park neighborhoods received around nineinches of snow, with other parts of Chicagoland reporting more than a foot.

Sophomore Mikayla Medina trekked through the snow to get to her in-person class on Wednesday. It was her first-time experiencing real Chicago snow.

“I’m from Southern California, so this is not really my thing,” Medina said.

Medina got a text from her mom that morning about Chicago-area schools closing because of inclement weather. Medina was expecting DePaul to follow suit, but the University remained open during the snowstorm.

During the storm, DePaul operated normal working hours and kept all its facilities open, although DePaul Dining had early closures Wednesday. This was thanks to staff members’ quick snow-clearing work, Russell Dorn, DePaul spokesperson said.

“​​When the decision is made to keep the university open, a major factor is the hard work of a great custodial and grounds crew who exemplify Vincentian personalism and professionalism in their work to ensure the campuses are safe and accessible,” Dorn said.

DePaul has four conditions where it will consider closure: Significant threat of harm, widespread transportation system malfunctioning or inaccessibility, physical disaster or the City of Chicago advises to cease operations.

It is up to the senior administration at DePaul whether the university remains open during inclement weather. The last time that the university closed was during the polar vortex in 2019.

DePaul’s administration did not send an official message of guidance out to faculty Tuesday night. Instead, it left the decision up to professors on what format they’d be teaching their classes the following day. With a diverse student body, many of which include daily commuter students from various parts of Chicagoland, DePaul professors who opted to go online Wednesday considered travel as an essential factor in their decision to move classes online.

Some DePaul students were surprised by the decision to remain open.

Oliveros had a short commute to Lincoln Park, but other students had a long way to go during the storm.

For sophomore Cormac Schaefer-Finn, learning that he’d have to make the slog of a commute through Wednesday’s conditions made for a lackluster day.  Particularly after learning that many DePaul students made it to class with the simple click of a button.

“It was a difficult commute,” said Schaefer-Finn, who regularly travels to both DePaul campuses from Wrigleyville. “I would’ve preferred if my classes went online, especially since all my friends’ classes were on Zoom.”

DePaul’s Faculty Rights and Responsibilities states that if a class is canceled, instructors must notify the local academic unit officer. The instructor must then reschedule, request a substitute or make other arrangements.

“I was watching the weather, as most of us were,” said Jordan Stalker, an adjunct faculty member in the College of Communications, who eventually decided that while the administration hadn’t yet made an official statement, it was best if his students moved to virtual classes for Wednesday.

“Most students are comfortable and capable [of] doing remote learning through Zoom,” Stalker added. “It wasn’t worth the risk of potential injury, especially with other classes doing the same.”

Some students were unimpressed by the snowfall.

Wilkinson was a freshman when DePaul canceled classes during the polar vortex in 2019. Back then, there was no option to attend class virtually. Students stayed home due to inclement weather.

Olivia Dunn was a freshman living on-campus during the polar vortex. After living through record-breaking cold and large gusts of snow, Wednesday’s snowstorm did not phase her.

“This was nothing compared to that,” Dunn said.