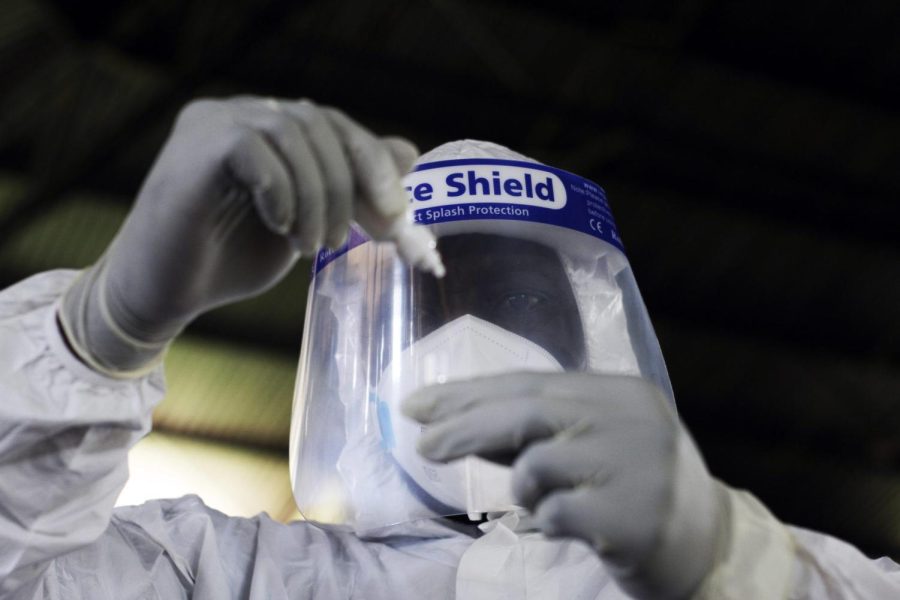 A health official takes a sample for tests at a private Covid-19 testing center in Harare, Zimbabwe, Thursday, Feb, 3, 2022.

Although the Covid-19 pandemic has devastated the globe, upended the global economy and still remains far from over, there are still some things to be optimistic about.

On Jan. 24, World Health Organization Director-General Tedros Adhanom Ghebreyesus stated if countries increase vaccination rates, create equitable access to healthcare centers and continue to monitor viral mutations, “we can end Covid-19 as a global health emergency, and we can do it this year.”

And on Thursday, WHO Europe Region Director Hans Kluge told reporters the continent is now entering a “plausible endgame” to the pandemic, stating that the omicron variant’s lower severity of infection, coupled with high levels of both vaccine-induced and natural immunization and the virus’s inability to spread as easily in warmer weather, could create “a long period of tranquility,” even as Europe currently endures all-time high case rates.

Paige Larkin, director of molecular microbiology at NorthShore University HealthSystem, notes that a great deal of optimism has come from existing vaccines’ surprisingly positive efficacy rates against the omicron variant.

“When we first had omicron, we didn’t know how well the vaccines were going to work because of all the mutations in the spike gene,” Larkin said. “And so, even showing that there’s a variant where you can still get infected, the vaccines do an excellent job at preventing hospitalization and death in a large portion of the population.”

In turn, Larkin herself has grown hesitantly hopeful that the vaccines’ positive results against omicron may be replicated with new variants in the future.

“As we get new variants — and we will get new variants — we’ve shown that just because it’s not a perfect match for the vaccine doesn’t mean that our vaccines don’t offer protection,” she said. “They still do. That being said, we still have to be very cautious and know that at any point, there can be more variants, and not all variants are going to be mild.”

In the U.S., a recent and rapid decline in daily Covid-19 cases has also been a major cause for relief. In just over three weeks, the nation’s seven-day average case rate has more than halved from a record 805,902 cases to 313,117 as of Saturday.

Dan Taylor, medical director of the outpatient center at St. Christopher’s Hospital for Children, has witnessed the swift decline firsthand.

“It’s been amazing,” Taylor said. “Over the past two to three weeks, the rates of parents coming in with a child to get Covid tested have dropped, I’d say, almost 80 percent. And the positivity rate — our rates have always been much higher than our city’s rates — but they’re dropping from 52 percent down to 18 percent over the last three weeks.”

There’s something for young children fearing the pandemic to be excited about, too: Pfizer and BioNTech announced Tuesday they had filed a submission to the Food and Drug Administration for emergency use authorization of a Covid-19 vaccine intended for children aged 6 months to 5 years.

Taylor notes that if approved, the impact would extend far beyond that of just children.

“Children are reservoirs,” Taylor said. “Their immune systems are still developing, so they’re more susceptible to getting various viruses and bacteria. So they have always been vectors for the spread of viruses and disease. And when I say spread, I mean spread to other children and infants, but also spread to family members, and especially family members who are at higher risk of morbidity and mortality of Covid — the grandparents, the parents with certain medical conditions that put them at higher risk. In pediatrics, we’re still having deaths of young children from Covid-19. Thank goodness it’s not even as close to as many as adults, but kids, a lot of times, give the virus to an adult who then dies.”

However, just because children can get vaccinated doesn’t mean they will be vaccinated. Although the FDA has authorized vaccinations of children aged five through 11 since late October, only 31 percent of children within that age range have received at least one dose, and only 22 percent have been fully vaccinated — both over half as low as the next equally sized age bracket.

Taylor suggests that for many parents, particularly those who are hesitant toward vaccines, skepticism over the safety of Covid-19 vaccination has resulted in them withholding the vaccine from their children.

“I think as a parent, your gut instinct is to protect your own kids from uncertainty, from danger — to put yourself and your health and safety on the line for them first,” Taylor said. “I think a lot of parents around the country who finally came around to getting [the vaccine] themselves might see this as, ‘okay, you’ve talked me into finally getting it even though I really didn’t want to. Now you’re asking me to vaccinate my 12-to-17-year old, and then my 5-to-11-year old and now my 6-month-old to 5-year-old?’ I think they hear that the eligibility that keeps going farther and farther down keeps coming too quickly to their children that they love and they want to protect.”

Public health experts have repeatedly found Covid-19 vaccines as both safe and effective against severe illness and death. Still, just under one-quarter of Americans remain unvaccinated despite nearly a year of emergency use authorization in the U.S., and according to a KFF poll, about 14 percent of Americans say they will “definitely not” receive even one dose of the Covid-19 vaccine — a number that has remained fairly constant since vaccines were first authorized.

“I think there’s a fundamental problem of trust in this country,” said Mary Jo Ondrechen, chemistry and chemical biology professor at Northeastern University. “Some of these Covid deniers say, ‘oh, well the science keeps changing.’ Well, no, the science is always evidence-based. It’s a brand-new virus, and as more data gathers, the recommendations change because we have more data and can make better recommendations.”

As vaccine hesitancy and rapid Covid-19 mutations have practically eliminated herd immunity from public health discourse, some politicians have expressed interest in transitioning to a more endemic approach: New Jersey Gov. Phil Murphy (D) and Arkansas Gov. Asa Hutchinson (R) have both recently voiced support for such an approach.

However, Larkin stresses that such an approach should not be viewed as harmless.

“Often in the general public’s eyes, when you hear ‘endemic,’ you’re thinking mild, you’re thinking not a big deal,” Larkin said. “But as a reminder, malaria — which kills so many people per year — is endemic in parts of Africa. And so, just because something’s endemic doesn’t mean it’s not fatal, it doesn’t mean it’s not devastating. It just means that it’s circulating widely.”

Taylor suggests that if the U.S. were to take an endemic approach, results would vary wildly from community to community.

“There’s going to be little wildfires, not a massive inferno across the entire country that we’ve been dealing with since March of 2020,” Taylor said. “You’re going to see little wildfires in areas that have lower vaccination and booster rates. And those wildfires not only will burn people, kill people, but it will destroy the economy. And that sometimes takes decades to recover from.”

While updates in the Covid-19 pandemic have made legitimate cause for optimism, Ondrechen emphasizes that people shouldn’t view these updates as a return to normalcy.

“I think that it’s going to be around for a while,” Ondrechen said. “To what extent it’ll be a serious threat to sort of normal life is hard to say.”