Malört: The spirit of Chicago endures 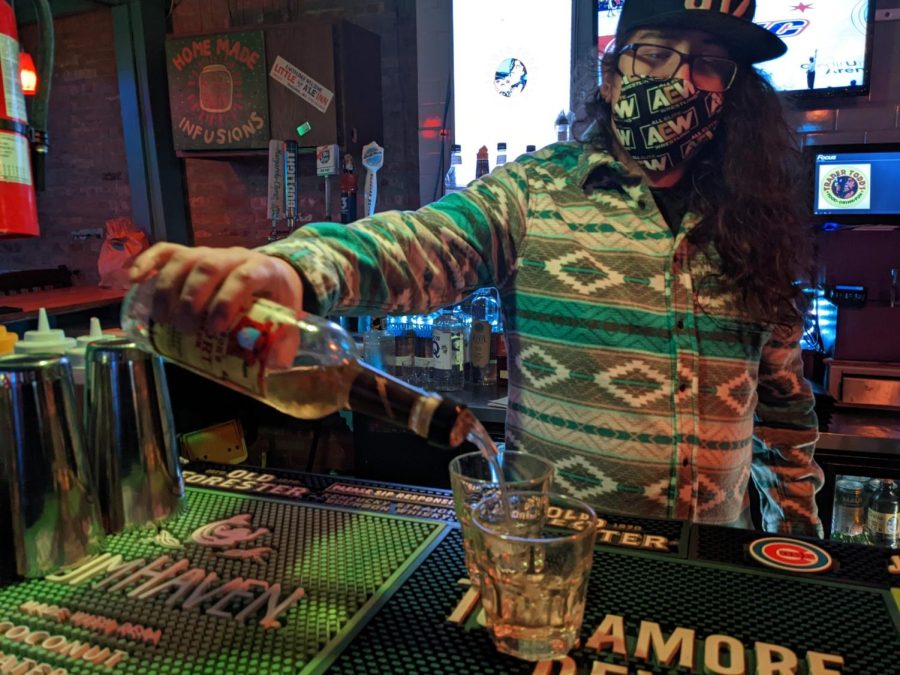 Bartender Oscar Correa pours out a shots’ worth of Malört at Trader Todd’s, just off the Red Line station at Belmont.

Every Chicagoan speaks at least one word of Swedish. For many decades, Jeppson’s Malört has been an indispensable Chicago staple.

The farthest thing from a smooth spirit, a shot of Malört is a declaration of war. If you’ve not properly fortified your defenses, you’ll find yourself quickly steamrolled by its abrasive, unpalatable flavor. Malört (or “moth herb”) is the Swedish word for wormwood, the liquor’s principal ingredient and bittering agent.

Malört could fill a dictionary of derisions — some of the ways I’ve seen people describe its aggressive flavor include: “pencil shavings,” “battery acid,” “gasoline,” “raccoon,” “grapefruit rind” and most recently, a friend of mine likened its lingering aftertaste to that of dill pickles, which he said he could still taste a good 15 minutes after his sole shot.

It’s certainly not for everyone — only for Chicagoans. As much as any deep-dish pizza or Chicago dog sans ketchup, Malört is an icon of this city. But how is it that an esoteric Swedish spirit came to fill that role? As you’d expect — it, like many American traditions, was brought here long ago.

Sometime in the 1930s, a Swedish immigrant named Carl Jeppson began to market his beskbrännvin (a traditional Swedish spirit) to Chicagoans as “Jeppson’s Malört.” As this was during the time of prohibition, Jeppson sold his liquor under a medicinal pretense. He allegedly once said, according to the Carl Jeppson Company, “My Malört is produced for that unique group of drinkers who disdain light flavor or neutral spirits.”

At McGee’s Tavern & Grille in Lincoln Park, I got to see the legend of Malört brought to life. Liam Carroll, manager and bartender at McGee’s, invited me to enjoy a few shots of Malört on the house with him and the other bartenders. Reactions among them ranged from delight to disgust in relatively equal proportion — one refused to take her shot, saying she couldn’t get the drink past her lips.

“I’d say it’s more fun than anything,” Carroll said. “If it’s the first time you’ve ever taken [a shot of] Malört, you’re not going to be a fan of it. But if you do take shots of Malört somewhat regularly, you kind of get used to the taste, so the fun part is when you have your friends take the shot for the first time — you don’t mind taking it, and then you see their sour face.”

Carroll went on to say that he’s always sure to serve up Malört for anyone new to Chicago. I noticed also that McGee’s had the Chicago beer Old Style on tap, and I’d be remiss if I didn’t mention the “Chicago Handshake,” a pairing of Old Style with a shot of Malört — though, as we’ve established, Malört is less conducive to a handshake than it is an attack.

“It punches you in the face like a Chicago winter … we all get through those winters and we all stay here [in Chicago], and I think that’s why Malört resonates with people,” said Pat Odon with Nisei Lounge, a Wrigleyville bar where Malört is tough to avoid. According to Odon, Nisei is number one in Illinois when it comes to selling Malört. “I’m staring at hundreds of bottles right now,” Odon said to me over the phone. “[Interest in Malört]’s grown a lot over the past decade … bitters have definitely become more common across the board.”

Malört is more than a mainstay at Nisei — it’s central to the bar’s identity and community. Love it or hate it, Malört is a liquor upon which Nisei simply insists. “It’s our most popular shot by far,” Odon said. “[Reactions range] from ‘That’s horrible’ to ‘That’s not that bad.’ Cilantro tastes like soap to some people … [Malört is] like cilantro. People who like bitters seem to enjoy Malört, but that’s definitely a subset of the first-time customer base.”

“Usually when I describe it,” Carroll said, “I say it’s a shot that tastes like pennies that you find underneath your couch cushion.” But why is it that Chicagoans continue to subject themselves to such an unsavory spirit? For Carroll, it’s not just a matter of the drink itself — more so, it’s the experience of drinking it. “I think it’s the experience of taking the shot — nothing tastes like it, and for a lot of people, they don’t like it the first time they have it, but they’ll go ‘What was that shot called again? Malört?’ and they’ll remember it.”

“It’s definitely something you can only get here in Chicago,” said Oscar Correa, the head bartender at Trader Todd’s, a karaoke bar just down the street from the Belmont Red Line station. Correa also pointed out how the legend of Malört is a self-perpetuating one — it’s something people want to try only because it’s such an iconic Chicago liquor, and it’s for exactly that reason that it continues to endure as an icon — and for Correa, it’s also a personal favorite. “It’s only like 20 dollars a bottle — so why not choose Malört?”

As Odon observed at Nisei, Correa noted a rise in Malört consumption at Trader Todd’s — a trend which he proudly encourages.

“When my [manager] started working here … he bought me one bottle of Malört for the whole week, and I was like ‘I need, like, seven or eight,’ and he didn’t believe me — now I get a case every two weeks because we go through so much Malört,” Correa said. “I drink it, I make other people drink it — every time anyone asks me ‘What do you shoot?’ I say Malört, and they go ‘Alright, let’s all do a shot,’ and then you’ve got five, six, seven people drinking Malört. It’s a Chicago staple … you can’t go wrong.” Carroll and Odon shared similar sentiments. “I’d definitely say it’s a staple,” Carroll said. “It’s bonding,” Odon said. “It’s Chicago. We’re a Chicago bar, it’s a Chicago beverage. Chicago bonding.”