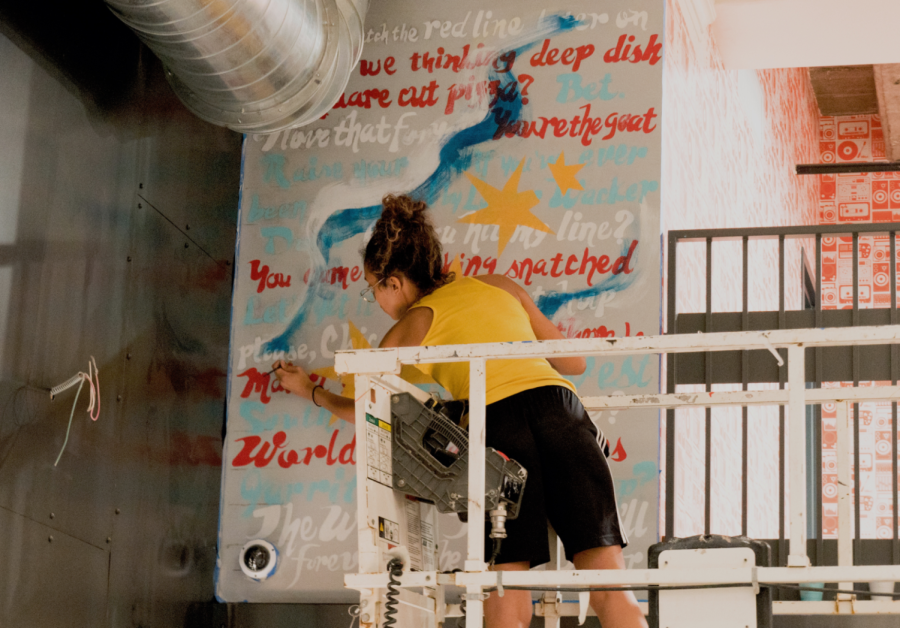 Janessa Rivera, a DePaul alumna shown working on a mural in Urbanspace. The mural highlights many elements of Chicago’s unique culture and proud art scene.

As a child, DePaul alumna Janessa Rivera would roam her grandmother’s house admiring her decorations, the painting job and small detailed accents. Ever since, an artistic fire to create purposeful art has been ablaze within Rivera.

Her grandmother’s house was designed by her uncle, who studied design at Columbia College Chicago for a period of time. His work paved the way for her artistic inspiration.

“He is the one who painted all my grandmother’s houses, and they’re all painted well. It’s not just, like, one color everywhere — it has accents,” Rivera said of her uncle’s work. “And he’s put in wallpaper designs, and he framed all her things without risk. [Always] seeing these kinds of things laid out in a pretty way that was always pretty inspiring.”

After that initial inspiration, a young Rivera enrolled in a high school drawing class where she cultivated her newfound passion. Here she learned how to go about drawing things other than manga, anime cartoons and other childhood interests of hers. This drawing class transformed into the next, which eventually lead to painting murals.

It didn’t take long for Rivera to enroll in DePaul’s art, media and design program. Through her education, she has transformed her work to fit a corporatized environment while also encouraging social justice conversations through subtle details. This allows the work to be displayed for a larger audience, as it will fit in a variety of environments.

“I have always been a fan of art that you kind of pass by at first, and then you look back because you notice something [different],” Rivera said. “Whether it be inappropriate or just [a little] secret, and you just kinda have to like [take] a double glance at that. I’ve always kind of tried to make my art like that, whether it’s by putting in something inappropriate or throwing in something that makes you think twice.”

Rivera continued to talk about a series she did about the Amazon rainforest. In this series, she utilized subtle hints at the theme “ignore me like the Amazon.” Rivera’s series was concurrent with a slew of damaging forest fires in the Amazon.

Rivera was recently commissioned to do the mural artwork inside Urbanspace, a cafeteria of local restaurants. The New York-based company wanted the artwork to have a “uniquely Chicago” spin to it, which Rivera perfected.

“The murals have a gritty but a very beautiful imperfection, which is indicative of the authenticity of Chicago and what we wanted her to communicate through her art,” said Anne Kavanagh, a spokesperson for Urbanspace.

Rivera put in small hints of Chicago’s culture to differentiate Chicago from New York, such as the city’s distinct hot dog and pizza consumption habits.

Rivera’s talents extend past just murals; she dabbles in bringing art to business through branding. She has created the logos for Rafael Royal’s two restaurants, Bianca’s Burgers & BBQ and Bianca’s Bodega. Royal and Rivera met working at Chop Shop, a restaurant in Chicago. Through their friendship, Royal knew Rivera was just the person for the job.

“I hired her because she always seemed really passionate about her work,” Royal said. “She also talked about her drive to make art her career. I admired that.”

Royal wanted his restaurants’ branding to make it clear they were Black-owned businesses, and he was impressed with Rivera’s ability to convey that through something as simple as a logo.

“We are Black-owned and I wanted to be clear about it,” Royal said. “The logo does just that. I also liked that she is an Afro-Latina, and having her help with the logo is me trying to put my money where my mouth is.”

As Rivera continues her career, she reflects on how difficult the pandemic has been on the arts. She encourages people to go out in support of Chicago’s artists.

“In the summertime, support your local artist,” Rivera said. “So when shows come out, [go to them]. It’s been a rough year for anybody making analog or [anything] that relies on an audience. [These] sort of things are really important to the [art] community.”