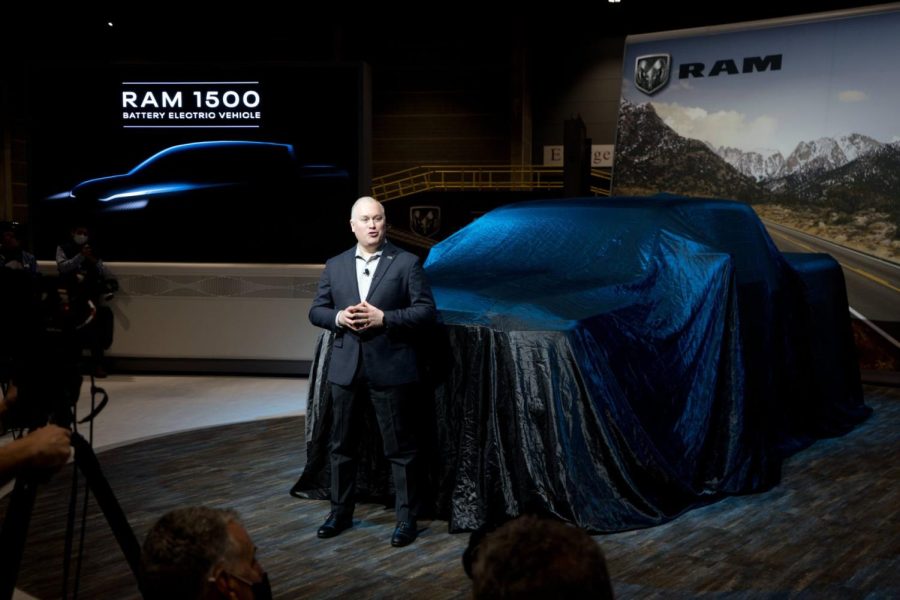 Not even a decade ago, the phrase “electric pickup truck” was a foreign concept across the automotive industry. To many automakers, it seemed impossible for a segment of gas-guzzling workhorses to abandon their powerful oil-burning engines and embrace an eerily quiet, environmentally friendly replacement.

Since President Joe Biden pledged in December 2021 that no new gas-powered cars will be sold in the United States as of 2035, many truck brands have had a change of heart. And at the 2022 Chicago Auto Show, which opened to the public Saturday at McCormick Place, prospective buyers have the chance to take a look at the first wave of electric truck offerings.

The electric truck making the biggest waves at the show’s Thursday media day was the all-new GMC Hummer EV (electric vehicle). As the Hummer name is synonymous with powerful military vehicles of the late 20th century, Hummer Tour Manager Dickie Mason says it was only fitting to revive the brand with a 21st-century powertrain.

“It has over 1,000 horsepower and over 11,500 pounds-feet of torque, which allows you to take off at an incredible velocity considering the weight of the electric system,” Mason said.

Sitting across the hall from the Hummer was  the Lamborghini Huracán STO, one of the most powerful and lightweight Italian sports cars on the market today. From a standstill, the gas-powered Lamborghini can accelerate to 60 miles per hour in three seconds.

Despite having a curb weight of over 9,000 pounds, Mason says the Hummer would easily beat the Lamborghini if the two were to race from 0 to 60 miles per hour.

“Torque is a unit of work crucial in getting a vehicle off the line, especially when it weighs as much as the Hummer,” Mason said. “When you hop behind the wheel of our truck with over 11,500 pounds-feet of it, you feel spaceship levels of acceleration. We’re displaying what we can do with EV technology, and hope our customers will feel the power.”

Although Hummer has no current plans to ever build another vehicle as powerful as its initial offering, Mason stressed that the technology itself is here to stay and will be used by sister brands like Cadillac and Chevrolet down the road.

“We wanted to come out big and bold with our first offering to show the world what we can do,” Mason said. “Tesla was first to come up with the idea of an electric pickup truck, and they turned it into quite the numbers game. We’re happy to play along.”

At Chevrolet’s own booth in the center of the show floor, the 2023 Silverado EV pickup was brought to the Midwest for the first time to play a more practical numbers game. It currently features the longest battery life of any electric truck on the market, with over 400 miles of EPA-approved range. Additionally, the Silverado EV boasts a 5-foot-11-inch rear truck bed, currently the longest of any EV pickup.

According to Chevrolet Chief Engineer for Electric Vehicles Nicole Kraatz, however, the real engineering genius is in the construction of the vehicle itself.

“The battery platform is built into the structure of the vehicle, so this is not a traditional body-on-frame [engine mounted onto separate frame] vehicle like you’d tend to see with gas models,” Kraatz said. “This architecture lowers the center of gravity for better weight distribution, and makes for a more comfortable and safer ride.”

For the first time ever in any full-size pickup truck, the Silverado EV also features 24-inch wheels and tires, which aid with ground clearance and the off-road capabilities the gas-powered Silverado has long been heralded for.

“There are still several Chevrolet cues sitting inside the design, but you can definitely tell it’s not a traditional Silverado when you look at it,” Kraatz said.

Compared to the Silverado EV, one would struggle to identify much of a design difference between gas and electric if they were to take a look at Ford’s all-new F-150 Lightning. But since the gas-powered F-150 was America’s best-selling vehicle in 2021, that’s not the revolution Ford Lightning Marketing Manager Jasen Turnbull is worried about.

“Our first goal with the F-150 Lightning was to make sure it could be fully charged overnight on a generic home charging box in under eight hours,” Turnbull said. “Range anxiety and charge time are two huge factors for EV buyers. But as we learned more about the technology we’d developed, we realized we couldn’t stop there.”

In pushing the boundaries of the Lightning’s technological capabilities, Turnbull says Ford’s engineers have quite literally generated one of the most important vehicles ever put to market.

“During our research on home energy management, we realized we had effectively created an eco-friendly backup generator,” Turnbull said. “As a result, the most powerful battery option on the Lightning can by itself power an average home for up to three days nonstop, using 11 different outlets located around the vehicle.”

Turnbull noted that in addition to being able to power a house, the 240-volt outlet in the pickup bed can be used for vehicle-to-vehicle charging if another EV driver is stranded without any range left, which has never been possible with any other EV model.

“You can honestly power just about anything with the Lightning, whether it’s a job site or a campsite,” Turnbull said. “The F-150 is our most important model, and we haven’t taken its electrification lightly. Now that the charging infrastructure and battery technology is all there, we’re excited to see a change in how we all perceive the pickup truck.”