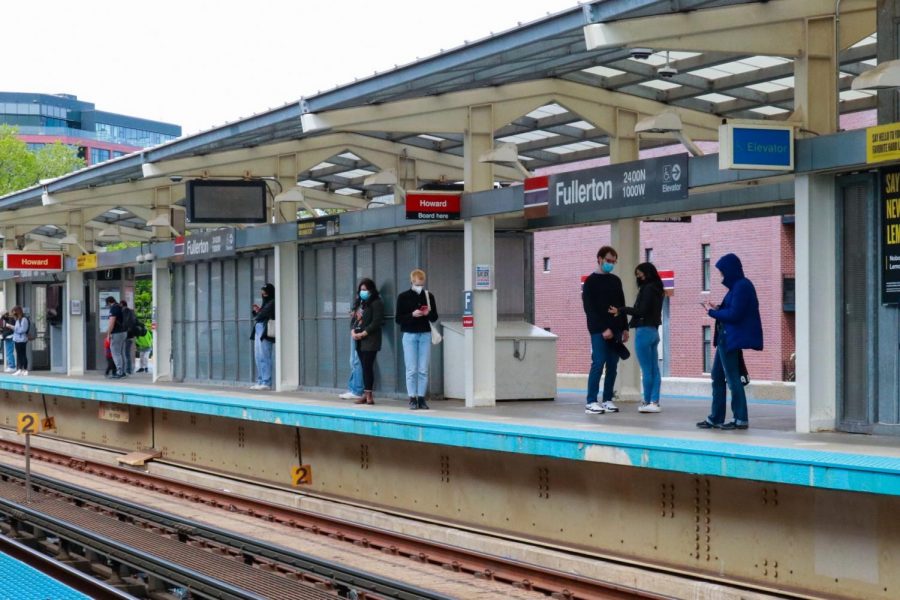 This is what ran through DePaul freshman Hailey Bosek’s mind on an October morning this past fall. Bosek stood on the Fullerton platform for the late-arriving Red Line train when a middle-aged male turned his attention to her, approached, and began to spew vulgar remarks.

“He was getting really close to me,” Bosek said. “I could smell his breath. He was [standing] over me, asking where I was going, what I was doing, saying I should come join him … It was pretty uncomfortable.”

Luckily, Bosek’s roommate soon arrived at the platform, understood the situation and immediately came over to try and help. Although the threatening man followed her onto the train and remained close, Bosek and her roommate were able to escape at the Jackson stop and get to class safely.

Bosek says that it could’ve gone much worse, but stories like hers are all too familiar to DePaul commuters who regularly rely on Chicago’s CTA trains. If DePaul students feel as though there have been increasing incidents like Bosek’s and other criminal activity on CTA recently, they’re not wrong.

Over the two-month period between Dec. 1, 2021, and Jan. 31, 2022, 285 instances of assault, battery, robbery or theft have occurred on CTA trains, stations or platforms, according to statistical analysis of the Chicago Data Portal. This indicates a 35 percent increase from the 211 crimes of the same category reported in 2020 through 2021.

Further findings discovered that 45 of these 285 crimes occurred in the immediate vicinity of DePaul campuses, taking place on the Fullerton platform, Jackson station and platforms and trains at either location.

The 45 occurrences at these locations are up 165 percent from the 17 reported during this period in 2020. This surge comes as no surprise to DePaul students who regularly feel uneasy commuting aboard the CTA.

“There’s always something going on,” said sophomore Gabby Iwanska. “I’m a girl in the city, and [safety] is always on our minds. I know a lot of my female friends refuse to even ride the Red Line.”

Although the Covid-19 pandemic has curbed ridership, the CTA’s crime rate per passenger has increased, according to the Chicago Tribune in December 2020. While ridership numbers increased in 2021 from 2020, as Chicagoans returned to their daily lives, the uptick of the past two months is met with concern to commuters.

“I did not know [the crime rate] was up that high, but honestly I’m not surprised,” Iwanska said. “It’s a free-for-all out there.”

In an emailed response, CTA’s media relations office said that in the scope of overall ridership, these crimes represent a “very low percentage.” Still, the transit organization acknowledged that they are constantly working to lower transit crime.

“Serious crime on the CTA represents just a very small percentage of ridership… That said, the CTA is always working with CPD to bring that number down even further.”

“The most important factor with train safety is being aware and alert of your surroundings,” Hein said. “Looking down at the phone and watching a video is extremely dangerous.”

As for Bosek, who now carries mace with her while riding the train, she too advises that remaining attentive is a good safety practice.

“Be aware, no matter your gender, and travel with people,” Bosek said.

Whether from CPD, CTA or university offices like DePaul Public Safety, DePaul students would like to see increased efforts implemented to decrease the number of transit-related incidents.

Kellen Brown, DePaul Student Government Association’s senator for community and government relations, said that SGA is aware of these trends and shares the same concerns as the general student body.

“We were discussing rising crime trends and public safety during fall quarter general body meetings,” Brown said. “And those conversations have only intensified.”

While students might not always witness police presence when they ride Chicago trains, CTA claims that in recent years, additional resources have been implemented in partnership with CPD to boost transit safety. CPD added 50 more officers and a detective unit to focus exclusively on CTA. CPD also launched its Strategic Decision Support Center later that year in June, dedicated to solving crimes committed on CTA and in the Central District according to the CTA media relations statement.

Even with these added resources, crime is still increasing, and riders would like to see more action taken to ensure safety. Brown believes that increased officer presence could help curb rider anxiety regarding safety.

“For me personally, it’s never made sense why there isn’t a police officer on every CTA train… [adding an officer] would go a long way for our students and the city,” Brown said. “We know that CPD is drastically understaffed, and that’s reflected in response times and unanswered 911 calls. But I think we’ve all seen city vehicles just sitting at the entrance to L stations.”

Although neither CPD nor CTA gave explanations as to why this uptick is occurring, CTA expressed its concern for DePaul student commuters and shared the following safety tips for Blue Demons in transit:

Pay attention to your surroundings.
Do not sleep on the bus or train or become too engrossed in a mobile device.
Be wary of noisy passengers arguing or causing a commotion. This could be staged to distract you.
Protect your personal belongings by keeping them concealed in a zippered/buttoned bag in your possession.
Hide wallets and other valuables in your front pockets.

“If you see something, say something,” the CTA media team added.

In lieu of the recent surge and accompanying worry among DePaul students, SGA has announced they will be holding a public safety town hall on March 1.

SGA also had tips for students worried about their safety while commuting. Brown encouraged students to take advantage of DePaul’s campus escort service between 6 p.m. and 6 a.m. and for students to try to ride CTA with friends whenever possible.

“We’re trying to brainstorm the best methods for expanding DePaul’s current practices and [to make] students feel safer,” Brown said. “We’d all like to feel safer on both campuses and during the commute.”