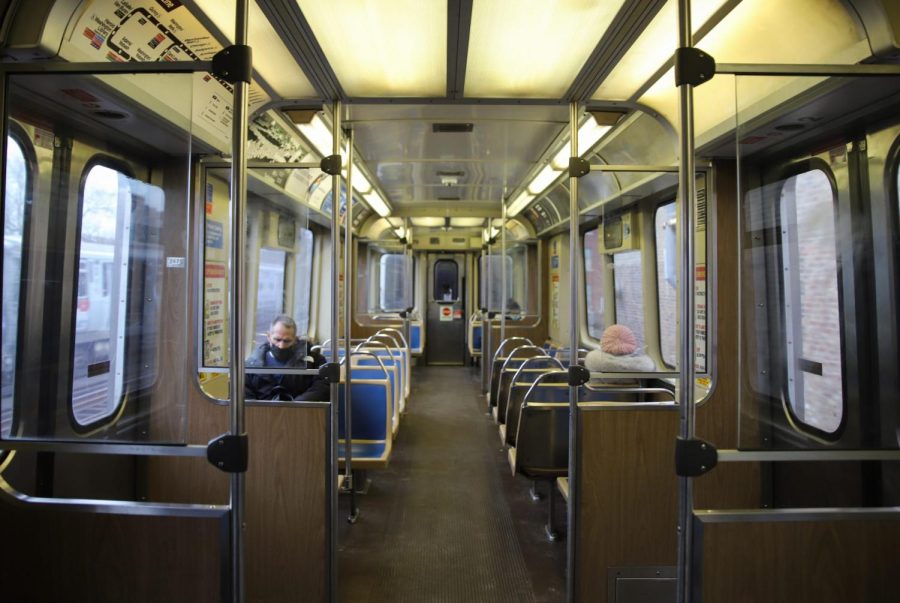 An essential part of the DePaul experience is taking the CTA across the city. For classes or for fun, students pile into cramped train cars, avoid eye contact, and hurry off the platform to their next destination. Rusted platforms that make students question the stability of the structures. Slush is tracked into the train car, the floors are salt-caked and questionable substances are all over the seats. DePaul students have at least one gross, bizarre or unusual experience aboard Chicago transit. While some stories make people laugh, gag or cry from embarrassment, CTA riders can bond through their shared struggles. A business major and a theater arts major may not have much in common on the surface, but both could point to a time when they wished they hadn’t been in that train car.

Elvira Hadzhieva is a first-year student who commutes via the Red Line to and from DePaul’s twin campuses. On her way back from the Loop, she saw a drug deal occur.

“So basically, I was going back to Lincoln Park from my class in the Loop. I decided to take the Red Line, since the Jackson stop is literally right outside the DePaul building. The train comes, and I sit down. A few stops pass by, and two young men walk into the train car. They sit down, and they’re blasting music very loud. And then all of a sudden, I just see one of the guys take out crack cocaine, and the other guy takes out money. They exchange, and I thought it was the most bizarre thing ever. According to my friend who works for the CTA, he says that’s typical stuff.”

Felicia Lemmon, a third-year student, had gone to a half-marathon downtown last May, when she saw a homeless man get verbally harassed by a couple.

“It was sometime in May last year. It was really warm out, like one of the hottest days last spring. I was coming back from the half-marathon that my friend had run and [the] celebration breakfast for it. The train was really crowded. It was about midday. Then, a homeless man walked through asking for any donations or food. I gave him the granola bar I had, and I think other people gave him either a couple dollars or other non-perishable foods. [The homeless man] gets to one unmasked couple… The woman had the mask below the nose or chin, and the man didn’t have a mask on at all. The couple offers them one of the doughnuts they have, and the homeless person very politely declines. No one thought to say anything about it, and the man moved to the next car. Then, the unmasked man starts to loudly mansplain to his girlfriend that if the person was actually homeless, he would have taken his doughnut. It was just really insensitive and pissed me off. Homeless people are constantly given junk food to eat, and it probably makes them feel just awful. As soon as they decline, people always automatically assume that they aren’t actually homeless or that they are ungrateful.”

Lauren Sheperd is a first-year student who takes the CTA from Lincoln Park to the Loop for classes every week. She had someone try to sell her a stolen sex toy.

Zoie Daugherty, a senior at DePaul was taking the Brown Line at Quincy when something quite unusual occurred.

“I was going home from the airport, from Midway. I transferred from the Orange to the Brown Line. It was that old-school stop, Quincy! [The train] was pulling up to Quincy, and this guy decides that now is the best time to just pee on the door, on the inside, while it’s moving. Everyone is like ‘what is going on?’ Thirty seconds later, this is about midday, and it’s getting chilly. He just pees right there, and he gets off at Quincy, and he walks off. It’s a little perplexing, since he could’ve gotten off the train and then peed. I had to move my suitcase, so the pee stream wouldn’t affect my suitcase.”

Carolina Correa is a senior at DePaul, and one time had to take the Red Line to a Target in the Loop. On her way back, she became very uncomfortable with a man’s advances.

“This happened in early January, when [winter] quarter was about to start. I needed to go to the Loop to buy something at Target. I took the Red Line all the way down there, and I got off at Jackson. I had class, so I was in a rush getting back. I went down the steps and got on the train. I sat down and noticed a dude staring at me, so I stared straight ahead not paying attention. I saw through the window that he turned his face to stare at me. I could only think ‘here we go again.’ He was asking about me: my name, what do I do, where do I live, and just being very creepy. I was very uncomfortable, and I just lied about it all. I didn’t want to deal with him all the way to Fullerton, so I got off at Chicago, and then I waited for another train. I said ‘I gotta go,’ and left.”

Nicole Von Drasek is a senior who works at a restaurant in River North. On the way to work, she and the other train’s passengers took a whiff of a foul smell coming from the man next to her.

“One of the grossest things that ever happened to me happened on the Red Line. It was about 2 o’clock, and the car was pretty full. At Fullerton, I was sitting next to this guy, and he had this lunch box that was dividing the two of us. He was an older gentleman, maybe in his fifties or sixties. He was on the phone, and honestly the train smelled really bad. On the phone, this guy tells this other person: ‘oh man, I just pissed myself, and this is terrible and the last thing I need.’ I am in my work clothes, and I cannot get these dirty, especially with that. And that is when everyone realized he just pissed himself. Luckily, my clothes were fine, but [the train] just smelled so strongly of piss.”

Edith Leonard is a second-year student living on campus. Little did she know that she and her roommates would be accosted on the Brown Line, on the way back from an early-afternoon brunch.

“Back in January, when the Brown Line wasn’t getting off at Belmont, my friends and I were heading back from brunch at Belmont. It was probably 1 or 2 p.m., coming back from brunch at Ann Sather’s, and we were at Diversey. A guy transferred from another train car, and he was talking to some other college-age girls. We were minding our business, but he came over to us and started dancing, throwing air punches, and laughing at us. I made the mistake of making eye contact with him, and he was like ‘did you just call me a bitch?’ I didn’t say anything. He kept going on and started calling me Cheryl. My roommate noticed he had started lifting his shirt up and messing with his pants. We were all worried he would start flashing us. Then, this other guy came up and was like ‘you need to leave her alone.’ And the guy who accosted us shoved the other guy into my roommate’s lap. The man’s grocery bag split, and everything dropped to the floor. The guy who was pushed into my roommate’s lap gets up and punches the guy who accosted us right in the face. You just hear ‘pow!’ And then a girl gets up and is like ‘get off the train, get off this car!’ At this point, my friends and I went to the other side of the car and just ran off at the Fullerton stop.”