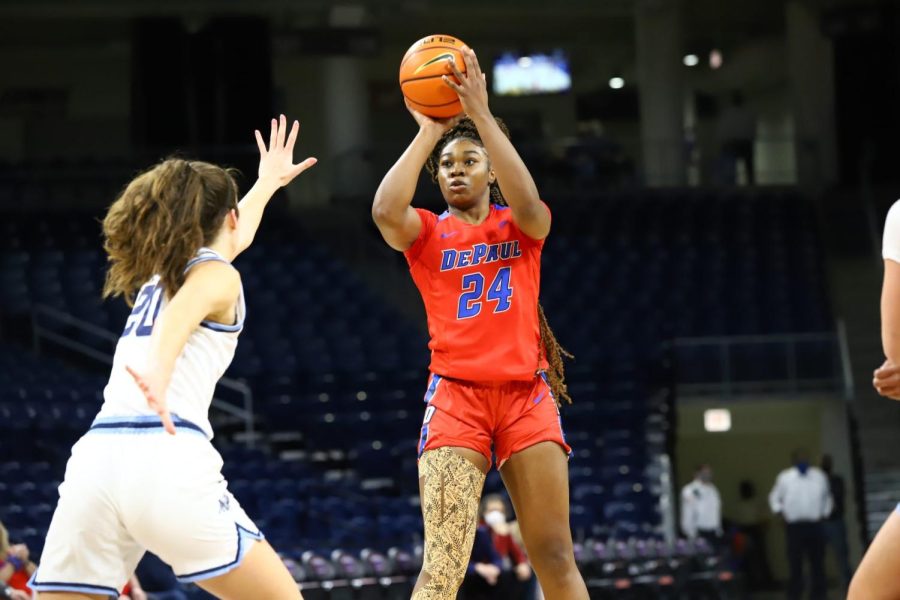 Freshman forward Aneesah Morrow set the school record for the most rebounds in a single season, but it wasn’t enough to defeat Villanova. The 73-68 loss puts the team at 13-5 in conference play and 21-8 overall.

The team was playing without senior guard Sonya Morris — one of their leading players — due to an ankle injury, but the offense did not miss a beat to start the game. Graduate guard Deja Church got the team on board with an assist to Morrow for a layup. Next, sophomore guard Darrione Rogers hit a step back 3-point shot to help DePaul get the 5-2 lead. Morrow followed through on the next offensive possession, grabbing the offensive rebound and scoring off Held’s missed shot to give them a 7-4 lead.

After Morrow’s offensive bucket, Church hit the three to extend the lead to six, 10-4. After a Villanova score, Rogers drove to the basket for the layup, keeping the lead 12-8. The following possession, Morrow forced her way to the basket from the free throw line to score the basket, giving DePaul a 14-10 lead.

Coming out of the timeout, Church drove down to complete the “And-1” play, extending the lead 17-12. Church scored again on the next possession with a step through layup to extend the lead 19-14. Rogers hit a deep 3-point basket to give DePaul a 22-16 lead. DePaul went on a stretch hitting five of their last seven field goals, but Villanova went on a 6-0 run to end the first quarter. The game was tied at 22, with DePaul shooting 56 percent from the field and 42 percent from the three point line.

DePaul’s offense slowed down in the second quarter. Villanova’s defense intensified and struck the scoreboard first. But Church stepped up, scoring on a step through jump shot to cut their deficit to two, 26-24. On the next possession, Rogers hit a jump shot to maintain the deficit at two points, 28-26. DePaul went on a two minute scoring stretch before Rogers hit the 3point field goal to cut their deficit back down to two, 31-29. Morrow followed up on the next possession with a running layup to tie the game at 31.

After the Villanova score, Morrow drew a foul and completed the “And-1” play to help DePaul regain the lead 34-33. Church hit an elbow jump shot to extend the lead 36-35. The defense stood strong, holding Villanova in the final two minutes on a scoring drought, ending the half with the 36-35 lead.

Offensively, Rogers led the way with 13 points. Church had 12 points while Morrow finished the first half with her 20th consecutive double-double, chipping in 11 points and 11 rebounds. The team shot 50 percent from the field and 33 percent from the 3-point line.

After Villanova scored first, Church started the third quarter just like she did with the first; getting the steal and taking it coast to coast with a euro-step layup to get DePaul on the board. The basket tied the game at 38. After going scoreless in the first half, senior guard Lexi Held finally landed on board after drawing the foul and hitting both free throws to tie the game at 40.

But similar to Held’s offensive struggle, the team struggled to score, going on a scoring drought for the next three minutes without hitting a field goal over the next five minutes. During that stretch, Villanova slowly extended their lead, going on a 7-0 run and hitting five of their next six field goals. DePaul’s offensive struggles continued, but the team was able to bounce back within the final minute to cut their deficit to five, 55-50.

DePaul continued to fight, coming out of the fourth quarter swinging. Morrow scored from the post to cut their deficit to three, 55-52. But the offensive production continued to dip, while Villanova found their scoring groove. Morrow did her best to keep the team within striking distance, grabbing the offensive rebound off the Collier miss and scores to maintain a single-digit deficit.

Church joined Morrow’s efforts, sparking the offense with a quick reverse layup to cut Villanova’s lead to five, 63-58. Rogers hit a big three with 36 seconds left in the game to give DePaul a chance for a comeback, but DePaul shooting struggles were not enough to overcome and seal the deal.

Morrow finished the game with 23 points and 15 rebounds. Rogers had 18 points, while Church had 17 points. The team shot 38 percent from the field and 20 percent from the 3-point line, while committing 17 turnovers.

The team’s next game is DePaul’s Senior Night, scheduled for Friday against Seton Hall.