‘Red’ was always ours, but now its Taylor’s too 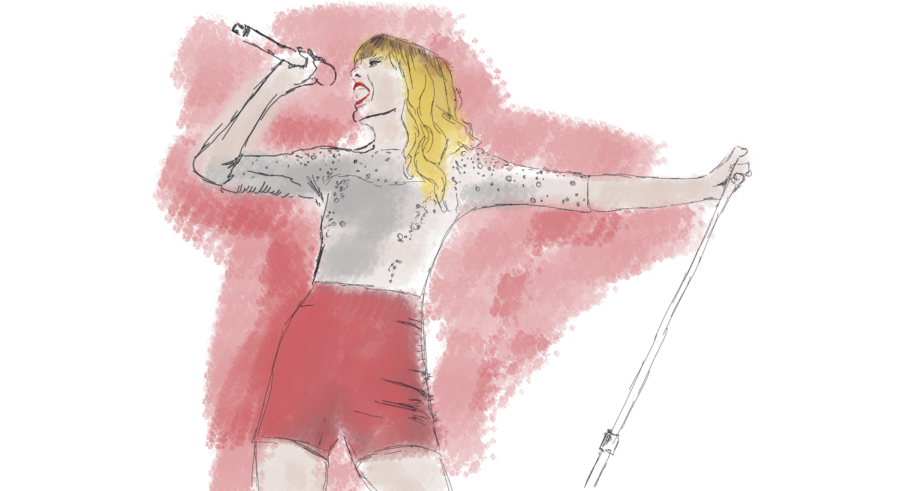 After waiting for almost a decade, Swifties were blessed with the highly anticipated rerecording of “Red,” which released on Nov. 12.

This is Taylor Swift’s second rerecording after “Fearless (Taylor’s Version),” which was released back in April, and her fourth album in the past 16 months.

“Red (Taylor’s Version)” — or “Red TV” — includes the original 16 tracks along with 14 new songs from the vault — among them, the 10-minute uncut version of fan favorite “All Too Well.” Swift also went above and beyond and released “All Too Well: The Short Film.” She not only stars in her own film alongside actress Sadie Sink — known best for her role in “Stranger Things” — and actor Dylan O’Brian but she directed it as well. Sink plays “Her,” representing Swift at age 20 and O’Brian as “Him,” representing Swift’s ex-boyfriend Jake Gyllanhaal at age 31. The former couple dated back in 2010 when they were both similar ages to the actors.

For those who don’t know, Swift’s rerecordings aren’t anniversary celebrations or merely done for promotion, but rather they’re a way for the artist to reclaim her work. All of Swift’s music recorded prior to 2019 is owned by her former label Big Machine Label Group’s CEO Scooter Braun. This includes her 2006 debut album and everything, including “Red,” before her 2019 album “Lover.”

In order to reclaim the work from her youth, Swift is rerecording her albums one by one. While “Red” has been enthralling Swift’s fans for the past nine years, Swifties can now finally celebrate Swift’s ownership as well.

The original album included notable features like Ed Sheeran and Gary Lightbody, who also appear on “Red TV” as well. Once Swift released the tracklist, fans anticipated new features such as Phoebe Bridgers and Chris Stapleton.

I remember listening to “Red” back in 2012 and not being as impressed by it as I am now. I’ve since grown more privy to Swift’s artistry and lyricism, and as I listened to the original in anticipation of the rerecording, I felt that I could finally appreciate Swift’s work.

Not only can fans revel in her beloved songs, but they can also appreciate Swift’s newfound maturity in her voice and style.

“I love how she kept the soul of the original, but she was able to resist what she calls her one true breakup album with a healed heart,” said sophomore Mary Peterson.

I was only 10 years old when “Red” came out. I had a hard time relating to some of these breakup songs because I was so young. But as other fans and I grew up, we can revisit this album with our growth as well.

“I’m happy that Taylor can finally own an album I have loved since I was 8,” said the manager of Instagram page DPUSwifties.

Fans can also appreciate how Swift revisited an album plagued with heartbreak and reinvented it as her own.

“The entire process must be so cathartic for her, going back to her stolen works now knowing which ones have truly touched her fans and being able to share the full picture that she had to shatter in order to have her albums fit in the preconceived notions of what is considered a normal length and content for an album,” Peterson said.

One of the highlights of the album is the 10-minute version of “All Too Well.” The new lyrics uncover more about Swift’s heartbreak from her relationship with Gyllenhaal. Swift has always been a poetical lyricist, but she paints such a vivid picture of a pure agony over ending a relationship when you still love somebody.

Swift paired the song up with her 14-minute short film. As of Saturday Nov. 13, Swift’s short film is number one on YouTube’s trending page. Sink and O’Brian’s acting in the infamous fight scene expose key moments in the couple’s demise.

“I thought the film was great,” said junior Mackenzie Cowan. “It was very interesting with Sadie and Dylan playing a couple but I thought it worked. The scene where they were fighting was amazing. I like the pacing of it. Towards the end where [Swift] is reading the ‘All Too Well’ book was cool because she was recognizing the success of her song. I also loved the filter.”

Being able to tell a story within a song is a talent Swift has mastered. I will never be able to get over how Swift can write her personal experience and make it relatable to the universal experience of heartbreak.

Along with “All Too Well,” fans found other classics as standouts in the rerecording as well such as “Holy Ground.”

“I think some of the standouts are of the coveted 10-minute original version that fans have been yearning for almost a decade, ‘Holy Ground,’ ‘I Bet You Think About Me’ and ‘The Last Time,’” Peterson said.

Some fans observed how Swift highlighted her voice over the instrumentation in the rerecording.

“‘Holy Ground’ sounded different to me,” Cowan said. “Her voice sounds older but it also sounds like you can hear her voice more quickly with less in the song to distract from her [voice]. It also sounded more country than the original did.”

Swift announced via social media on Nov. 14 that she will release a new music video on Nov. 15 for “I Bet You Think About Me” directed by actress Blake Lively.