‘Fefu and Her Friends’ is an intimate look at femininity 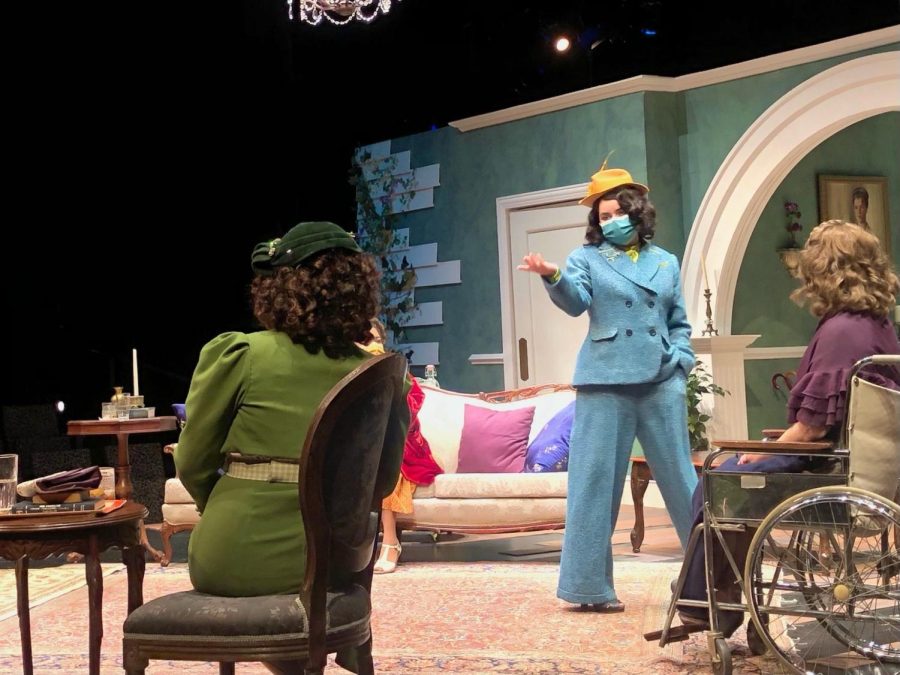 Fefu, played by DePaul student Neysha Mendoza, practices a speech for a charity fundraiser she is preparing. Also pictured: Fiona Rae Warburton as Cecila and Lauren Skelton as Julia.

Early in the play, Fefu picks up a gun, cocks it, and shoots her husband.

The gun is not loaded. Probably.

Off-stage, her husband falls — shocking Fefu’s friends, although she reassures them he is not dead.

The shotgun moment, as well as Fefu’s opening line “My husband married me to have a constant reminder of how loathsome women are” are slaps in the face to both the audience and the women she’s addressing.

The play is witty, disturbing and disorienting (at times almost incoherent). It challenges the audience to see from different points of view, literally. It’s well-acted and nicely designed, with a beautiful set and costumes.

The 1977 drama is by playwright María Irene Fornés, and is considered one of the most avant-garde works of theater, as well as a trailblazer in interactive theater. It’s also known for it’s all-female cast. While the characters talk about men, they never appear onstage, even her husband (who is only pretending to be shot — it’s a game they play, Fefu tells her friends). The play ran Feb. 11 – 20 in the Watts Theater.

The play, set in 1935, takes place over three separate acts. It starts off pretty conventionally. The first act shows Fefu (Neysha Mendoza) welcoming seven of her college friends to her country home to catch up and prepare for an upcoming charity fundraiser they’re planning. The entire act is one, drawn-out scene set in an ornate drawing room, with a sofa, chairs, coffee table and piano. The audience is introduced to each character, getting a glimpse of their personality and of how they interact with each other.

The second part is a nearly hour-long section of interactive theater. Audience members were divided into four groups based on colored stickers on their tickets and ushered into more intimate spaces: A character’s bedroom, the kitchen, a garden, a study. Going backstage feels a little forbidden — seeing crew members sit at sound design tables and seeing the back of the set feels like lifting the curtain and seeing something we’re not supposed to.

The four audience groups watched the scenes play out in a different order, learning how the scenes interact with each other and play out. In one room, audience members can hear yelling, argument and play-fighting in another, and Fefu runs across most of the scenes.

As a member of the blue group, I started with a kitchen scene where Paula (Taylor Santos) shares with Sue (Adelaide Leonard) the results of her calculations on the duration of love: seven years and three months. Sue leaves the room and Cecilia (Fiona Rae Warburton) enters. It becomes clear that she and Paula are ex-lovers.

Next was a scene on the lawn, where Fefu and Emma (Savannah Youngblood) pick vegetables. The third scene in the set was Christina (Emilie Maureen Hanson) and Cindy (Jamie Herb) in a study, where one studied French and read jokes from a magazine. (What do you call an unfaithful husband? A “cheetah.”) And last, Julia (Lauren Skelton), who uses a wheelchair, lays close to the audience in bed. She hallucinates scenes of death and pain, repeating a prayer to herself.

The set of scenes work in concert with each other and play with each other. Fefu runs through the different scenes, spilling a pitcher of water and rounding up the characters for a game of croquet. As an audience member, it feels like you’re eavesdropping on different conversations at a stranger’s house party. It feels almost awkward, unhelped by the few chairs available to sit and watch the 10-minute mini scenes. It may be designed to make you feel self-conscious.

As soon as I thought I processed what was going on, perfect timing by the actors and some great stage management during the five minutes in between each scene interrupted whatever cohesive thoughts I might have developed and forced me to start fresh in a new scene.

The second act reveals more about the characters and their relationships, showing who they are when no one else is around or when their boundaries are lifted with people they’re close to. The mini-scenes offer explanations for the way each character speaks to others, interacts with new people, chooses her words or even sits or stands. In the third act, we are able to view the characters on a deeper level, feeling fully introduced to each of them, even when they resume their social performances.

The play is about discovering the many realities and relationships that exist between eight different women and what happens when they overlap and crash in each other. Fornés waffled about whether she considered the play feminist, but she did say, above all else, “The play is about women.”

It’s also hard to address the play without also addressing the way disability is portrayed. In one moment, Julia speaks about how sometimes, she wishes she were in a hospital with other people. “so I could be with other nuts,” she said. The other characters look at her, unsure of how to respond, and Julia reassures them, telling them it’s okay to laugh.

Despite being slightly surreal, the play realistically shows the different dynamics between women. The characters are serious with each other, but they’re also playful — they run and scream during a water fight while doing the dishes. They sit near each other quietly, bring coffee and food to each other, coach each other. They argue and criticize each other, but are never petty or catty.

Fornés’ play captures how women behave when they’re not performing for anyone. When they’re alone — as with Julia’s scene — or when they’re with people who let them be themselves.  It lays out the raw, complex and sometimes conflicting emotions of the different characters, but doesn’t leave you with any one takeaway message, resolution or main point.

The disorienting moments of the play, like Fefu’s anti-feminist opening line or the shotgun, are meant to provoke. Fornés doesn’t tell the audience what to think of the play. The meaning is up to us. Fornés points a gun at her audience, cocks it and shoots. The audience processes the rest off-stage.