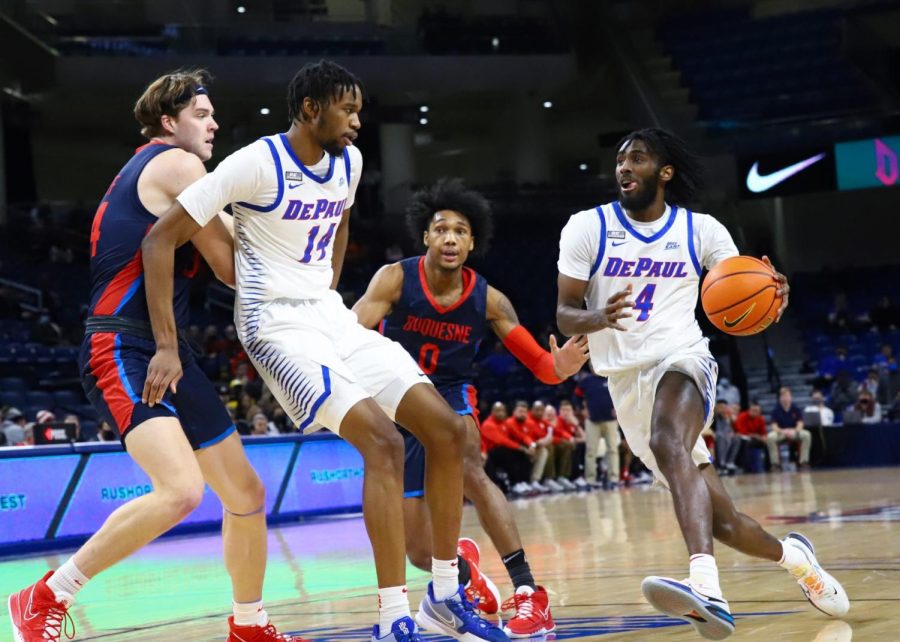 For the first time in six years, DePaul will not be finishing at the bottom of the Big East standings.

The Blue Demons’ 68-65  win over Georgetown Thursday night guarantees that Tony Stubblefield’s team will finish higher than 11th in the conference this season.

Georgetown, on the other hand, continues to struggle in the Big East, with the Hoyas now winless in 16 Big East games this season and are guaranteed to finish in last place.

For DePaul, wins have been hard to come by recently — losing the previous four games by an average of 4.8 points. During that four-game losing streak, the Blue Demons lost two games by two points and another by three in overtime.

DePaul has had problems closing out games this season, especially in the last few weeks. On Thursday, however, it was the Blue Demons’ turn snatch a late-game win through a couple of clutch plays from senior guard Javon Freeman-Liberty.

DePaul once again played with only seven scholarship players. David Jones (ankle) and Javan Johnson (hand) remain out with injuries and it is unknown as of yet when they will be ready to return.

For once, only having seven players available did not negatively affect the final result for DePaul. Freeman-Liberty led the way for the Blue Demons, finishing with 25, seven rebounds and three assists.

When these two teams met in Chicago two weeks ago, DePaul used a 30-2 run in the second half to power past Georgetown, 82-74. Jones had a career night in that meeting by recording the program’s first triple-double: 22 points, 14 rebounds and 10 assists.

It was a different story in the second meeting this season. The Hoyas did not let DePaul pull away in the second half. Instead, Georgetown competed until the final minute.

Both teams played like they were desperate to win. Players were diving for loose balls, blocking shots in the paint and around the perimeter and kept responding whenever the other team would go on a run.

That does not mean, however, that the game was played perfectly. In fact, far from it. Georgetown and DePaul combined to commit 33 turnovers, miss 27 3-point attempts and 16 free throws.

DePaul controlled much of the first half, which allowed the Blue Demons to go up 27-16. The Blue Demons, however, recorded only one made field goal in the final six minutes, with the Hoyas using that stretch to make it a four-point game, 30-26, at halftime.

Much of the second half followed that same script: one team going on a run, followed by the other team answering and keeping the game close. The biggest lead in the second half was DePaul holding a 62-55 advantage with under four minutes to play, but Georgetown immediately responded with a 10-2 run.

The final few minutes of the game started to look like the last four DePaul losses — holding a lead by a couple of points, only for the other team to break the Blue Demons’ hurts with a close win.

When Georgetown’s Jalin Billingsley heaved a 3-point shot as the shot-clock was expiring and went in to put the Hoyas up 64-63, it seemed like it was finally going to be the Hoyas’ night.

Freeman-Liberty, however, had other ideas. He scored DePaul’s final five points and came down with a couple of crucial rebounds to secure the program’s fourth conference win of the season.

Yor Anei and Nick Ongenda also joined Freeman-Liberty in double figures, with both players scoring 11 points. Jalen Terry had a relatively quiet night in the scoring department, only six points on 2-of-4 shooting, but he did lead all players with six assists.

DePaul will return to Chicago to play its final two home games of the season — St. John’s on Sunday and Marquette on Wednesday — before concluding the regular season at UConn March 5.