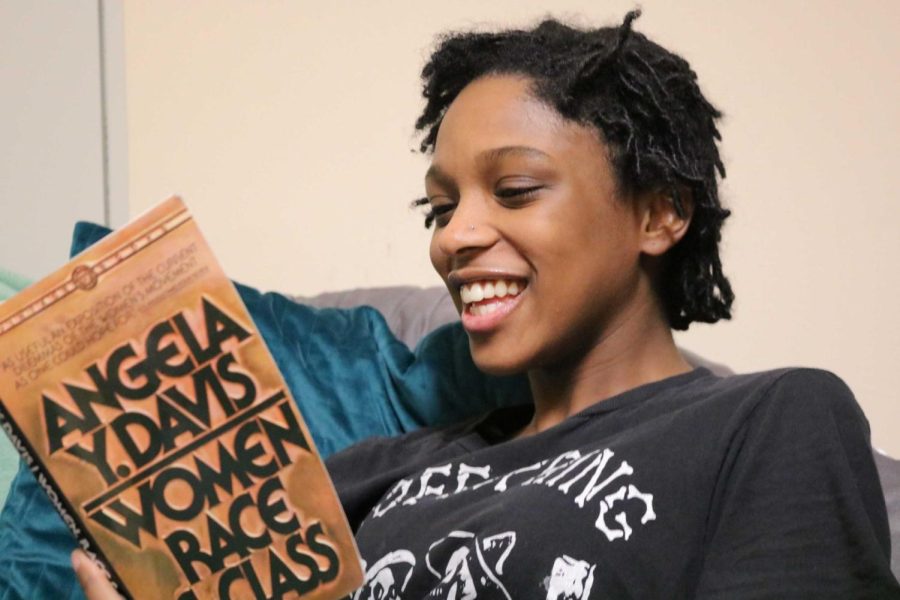 Freshman Gylani Oliver sits and reads "Women, Race and Class" by Angela Davis, who is one of Oliver's role models.

Self-love, perseverance and encouragement: these are the qualities many female Black students at DePaul learned through their Black role models.

These characteristics were taught in several ways. Some were learned directly from a parent’s words or actions, while others were taught by the influence of celebrities, adults and older friends.

For junior Vilencia Franklin, her role model is her mother.

“She is hardworking, strong, and did not let being a teen mom or even having a rare disease stop her from obtaining her education and career goals,” Franklin said. “I find that very inspiring.”

Franklin said her mother had exemplary resilience, especially when she was raising Franklin and her two siblings.

“Having three kids in her early 20s was not easy,” Franklin said. “[My mother] managed to raise [me and] my brothers while getting her education and pursuing a job in her desired career path. Black attorneys are rare, but my mom did not let that stop her. She has been a senior paralegal for some time, but now, at 36 years old, she has decided it is not too late to pursue the career she wanted.”

Franklin’s signature role model is television writer, director and actor Issa Rae who, according to Franklin, normalized a formerly unseen aspect of the Black female experience through her characters’ speech and through how they navigate their emotional journeys.

“Issa Rae shows the normalization of finding yourself and being able to make mistakes,” Franklin said. “[She is] humanizing herself and Black women, which happens very rarely, especially in the media.”

Franklin said she hopes to continue to use her role models’ examples in her career as a teacher. She said teaching can help her instill goals of global citizenship to her future students. Eventually, she hopes to work as either a school administrator or member of a district school board.

Franklin is not alone in seeing her mother as a role model. Freshman Gylani Oliver said her mother has been a profound influence in her life as well.

“She is a strong and determined woman that maintains her kindness and understanding,” Oliver said. “She got through college while still raising me, she hustled and worked to ensure me and my sister have a good life. I love my mom.”

Oliver also looks to African American political activist Angela Davis and African American educator and journalist Ida B. Wells as role models in her life. For Oliver, all three women have given her confidence and appreciation for her intersecting identity.

“I am both a woman and a Black person, and I should not be ashamed of either,” Oliver said.

Oliver said she believes it is important to learn from the lessons taught by previous generations.

“You can lead a horse to water, but you cannot make it drink,” Oliver said. “All [of] these women have so many life lessons that we can ‘drink’ but we the ‘horses’ cannot be forced to learn the lessons. It is up to the person to learn it and absorb it.”

Sophomore Gina Montalvo said she admires the crafts from her role models. She said she looks up to jazz icon Billie Holiday, playwright and actor Anna Deavere Smith and her friend Kennedy Freeman, a sophomore at American Academy of Art, who produced her own coloring book.

Montalvo said the work of people like Deavere Smith shows how Black people can give an entirely new point of view to different media like film and plays.

“Her work through documentary-style theater, specifically ‘Twilight: Los Angeles,’ is breathtaking,” Montalvo said. “[Deavere Smith’s] work not only tells another person’s real story, but also embodies the people she interviews in a way that provides perspective and empathy.”

Montalvo said she recognizes someone’s ability to empower others, as Deavere Smith does, as a valuable attribute to her own identity and her personal calling in life.

“Many of my Black role models have done incredible things with their lives,” Montalvo said. “Coming from poverty and dealing with colorism, two things I have never faced. It is a reminder to use my resources and not only work on my dreams, but to help others work towards theirs.”

Though these role models have been recognized, there is no denying that these students have had to go through either being taught history involving these role models or search within their own households to find them.

Christina Steed, a Black adjunct professor and communications expert at DePaul, tells a story of representation in her first agency internship when she saw herself reflected in a Black female supervisor.

“We often think people must be celebrities to be worthy of our admiration, but we have people in our families and in our communities who are doing important things to be modeled,” Steed said.

But, the desire to find role models in the DePaul community comes with the challenge of finding professors and faculty who are able to be looked up to. Franklin mentioned she wants to have a connection to Black professors at DePaul, but said she has not had any professors who are people of color. So, this begs the question: is DePaul doing everything in its power to give students like Franklin, Oliver and Montalvo support and mentorship?

According to Franklin, the answer is no.

“I have had professors that made me doubt my intellect,” Franklin said. “[They] gave me no chance to show them my capabilities as a student, and in most of those cases, being the only Black student, I felt the lack of support and belief in me was racially motivated. So, it is important that the educators are educated in not putting us in a box and doubting us or our work.”

Though Franklin said she hopes this will someday change she said she has not been able to build many close relationships with Black faculty members. She said this could be because there are not many Black professors at DePaul.

“I have not had any connections with faculty who are [people of color at DePaul] so I cannot say I have met any influential faculty members of color since my being here at DePaul,” Franklin said. “But I hope that will change before I graduate.”

Kiersten Riedford contributed to this story.