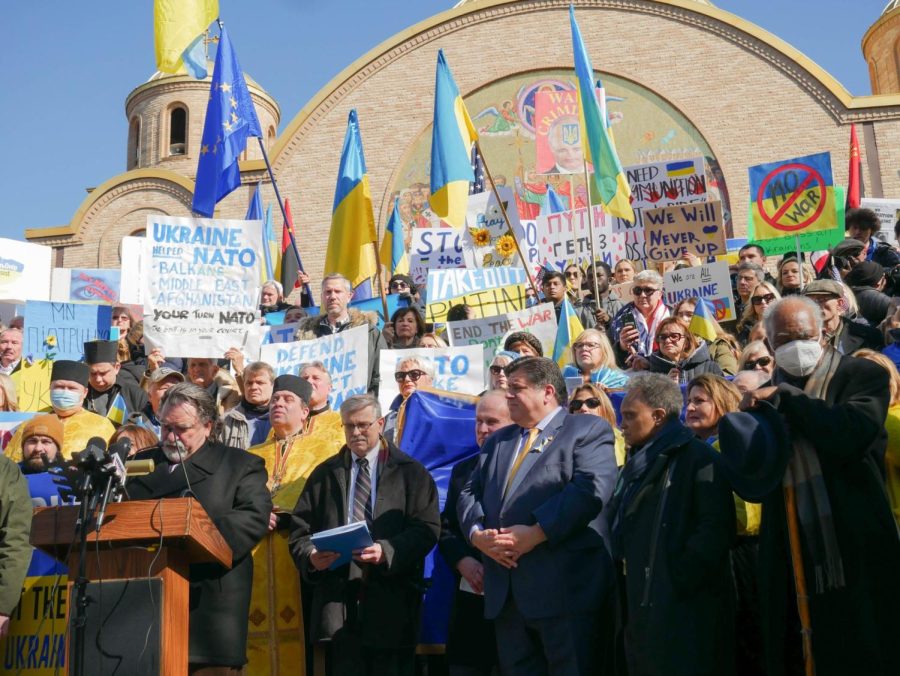 Gov. J.B. Pritzker, Mayor Lori Lightfoot, and more than a thousand Chicagoans came together to show support for the Ukrainian people in the Ukrainian Village on Sunday.

“Whether you come from Ukraine, or your family is from anywhere else in the world, today we are all Ukrainian,” Pritzker said.

Pritzker, who noted his own family ties to Kyiv, was staunch in his criticism of Putin and the actions of the Russian military.

“Screw Vladimir Putin,” Pritzker said. “To the heroes of Ukraine, Illinois is with you.”

Lightfoot echoed Pritzker’s sentiments to the energized crowd, who stood crammed on sidewalks and streets surrounding the cathedral.

“We stand together today in solidarity with Chicago’s Ukrainian community and the country of Ukraine,” Lightfoot said. “…We must continue to send our thoughts and prayers… but what we must also do is raise our voices,” she said.

Around 50,000 people of Ukrainian descent live in Chicago, according to U.S. Census data.

The event was one of several examples of Chicago’s support for Ukraine as Russian forces invaded the country. Also on Sunday, supporters of Ukraine also gathered in front of Buckingham Fountain on Columbus Drive while a convoy of semi-trucks parked together in protest of Russia nearby.

“It’s Ukraine today, but it’ll be another democratic freedom-loving country tomorrow,” Lightfoot said. “We must stop [Putin] in his tracks … right here and now.”