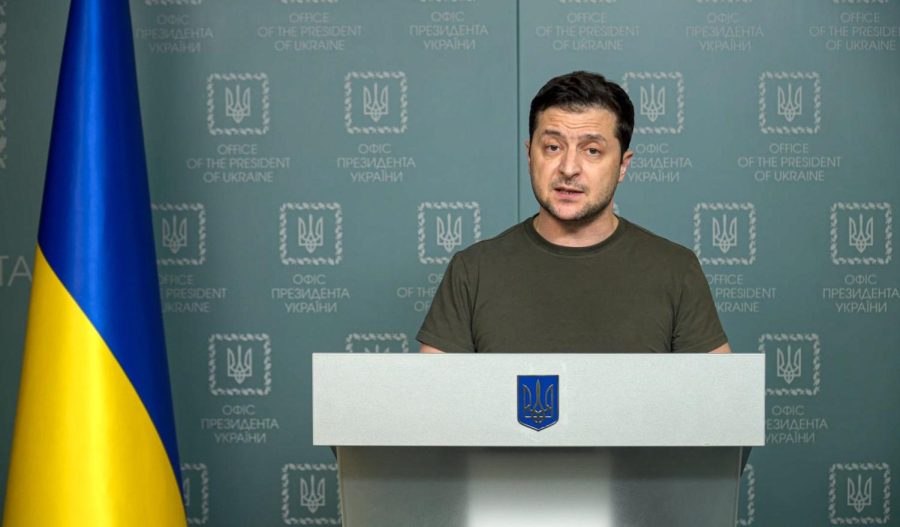 On Wednesday night into Thursday morning, the western world watched in horror as Russian troops invaded the sovereign nation of Ukraine. In the blink of an eye, political stability in eastern Europe vanished.

Many of the images seen on TV and social media have been hard to stomach. Yet, during this somber time, an example of true courage, leadership, and patriotism has shown through in Ukrainian President Volodymyr Zelenskyy and the Ukrainian people.

Americans aren’t used to seeing these qualities from their political leaders.

Russia is a significant world power. This nonsensical war will take many Ukrainian lives. Still, it will not bode well for Putin and Russia in the long run. The decision to invade with lies as justification and artificial Russian patriotism was a major miscalculation by Putin, plain and simple.

Professor Richard Farkas has taught political science at DePaul for 49 years. Specifically, he’s lectured on Russian politics both at DePaul and abroad in Ukraine, amongst other countries. What Farkas sees taking place is the beginning of a generation-long military conflict that Putin and Russia will not win.

“When the carnage that gets wrought by this military operation becomes known to people, the world is going to see it, and they’re going to react very negatively,” Farkas said.

Ukraine is a sovereign nation with distinct culture separate from Russia.

After the Russian Revolution, in which Russia ended its monarchy and established a socialist republic, Ukraine emerged as independent and became recognized as the Ukrainian People’s Republic in 1917. Five years later, it joined the Soviet Union until 1991, regaining independence after the USSR dissolved.

Ukraine is used to fighting for sovereignty. The Ukrainian people have shown that they will persevere and fight back for years to come.

“Ukrainians will go underground and fight back,” Farkas said. “And insurgencies are one of the things that the Russian military has never been effective at managing.”

Farkas is right. Insurgencies in Afghanistan frustrated Russian military efforts for a decade in the 1980s.

Since the invasion of Ukraine began Wednesday night, social media has broadcasted the Ukrainian people’s courage and inspired resistance. Videos show students, business owners, mothers and fathers taking up arms to fight alongside the Ukrainian military because they feel it’s their duty.

A video has gone viral of a Ukrainian woman in Henichesk telling Russian soldiers to put sunflower seeds in their pockets so that flowers will grow when they die on Ukrainian soil.

Social media will prove to be a thorn in Putin’s side.

Zelenskyy himself has shared videos, updating the world in real time on what’s happening in Kyiv. As many leaders would likely seek refuge and safety, Zelenskyy has opted to stay behind and fight with his people.

“We aren’t going to lay down weapons,” Zelenskyy said. “We will protect this country. Our weapon is our truth, and our truth is that it’s our land.”

Striking words from a leader who truly loves his country.

We’ve seen former President Donald Trump call Putin a genius for the invasion last week. American political leaders of the right have used the conflict for political gain, claiming it wouldn’t have taken place if their party held the office of the presidency.

It’s been a fantastic display of hypocrisy from the party that regularly criticizes the left for politicizing mass shootings.

On Jan. 6, 2021, as domestic terrorists stormed the U.S. capital, Republican members of congress took refuge as their own supporters tried to disrupt our nation’s defining practice. Later, some of these same elected officials would praise the insurrectionists for political gain.

On that day, as Americans looked to their president to address the situation and settle the dismay, what did he do?

Nothing. He sat and let it unfold before finally making a statement afterwards in which he told the insurrectionists he loved them.

In contrast, Zelenskyy refused a U.S. offer to be extracted from Kyiv as Russian troops advanced, telling American officials, “The fight is here; I need ammunition, not a ride.”

Zelenskyy has donned a flak jacket and opted to stay with his people, telling members of the European Union, “this might be the last time you see me alive.” That’s true leadership.

It’s hard to picture any American politician reacting the same way as Zelenskyy. Responding with courage and doing what’s right isn’t the knee-jerk reaction for most leaders here. Instead, American elected officials seem to make decisions based on what will garner them the most political gain.

Again, this will be devastating for the Ukrainian people. Many people will die at the behest of a cartoonishly evil man. Even if Putin and Russian troops continue to advance and end up wholly occupying, in one way or another, Ukraine will remain, and so will its people. A country and people that many Americans can learn much from about patriotism.