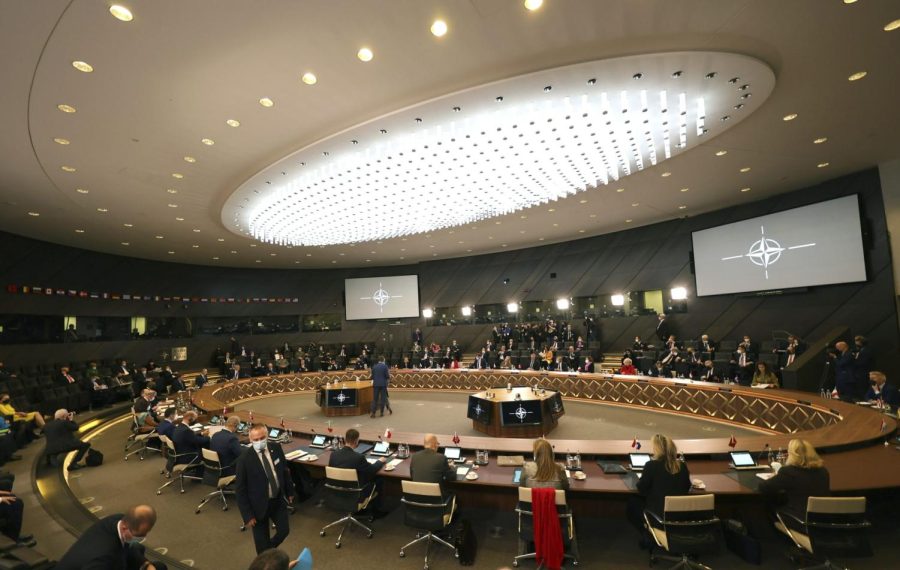 As Russian troops continue their full-scale invasion of Ukraine in the largest conventional attack on European soil since World War II, tensions between Russia and NATO, the North American and European military alliance, have grown to heights not seen since the fall of the Soviet Union.

Originally formed during the Cold War to defend the West against both the USSR and the spread of communism, NATO has persisted since the USSR’s collapse, continuing despite its original aims turning moot.

“Of course, the argument from the Russian side is that the Soviet Union doesn’t exist and [Soviet] communism doesn’t exist,” said Dick Farkas, political science professor at DePaul. “So ostensibly, the reason for the alliance system to exist either doesn’t exist at all or needs to be recast, redesigned, reconceptualized.”

Since the breakup of the Soviet Union, Russia has asserted that U.S. officials made a commitment to not expand NATO’s borders eastward towards nations formerly under Soviet influence or control. However, throughout the following decades, NATO’s borders grew increasingly closer to Russian soil.

“Over time, that commitment evaporated,” Farkas said, “and places like Poland, Hungary, Slovakia, Romania, Bulgaria and all the Baltic states — all being on the border of the place called Russia that they continued not to trust — [sought NATO] membership and were accepted.”

“This has been a central preoccupation for putting and for his inner circle of security experts: pushing back NATO expansion if possible, and if that wasn’t going to happen, preventing anybody else from joining — and most notably, Ukraine,” he said.

Ukraine’s relations with NATO have swayed back and forth between amicable and unfavorable since the country first applied to begin its NATO Membership Action plan — the alliance’s program to assist with preparation for eventual membership — in 2008.

Following Viktor Yanukovych’s successful 2010 bid for Ukraine’s presidency, Ukraine scrapped its plans to eventually join NATO, instead opting for military neutrality. However, mass protests erupted across Ukraine following Yanukovych’s 2013 decision to favor economic ties with Russia and the Eurasian Economic Union over ties to the European Union, eventually coalescing into a revolution that saw the Ukrainian government ousted and replaced with one more supportive to European relations.

Initially stating that Ukraine would not be joining NATO, Russia’s annexation of Crimea in March 2014 and Ukraine’s elections later in October resulted in the new government prioritizing accession into the Western military alliance — a position the government has held since. The Russian invasion of Ukraine has been perceived by many as largely caused by Russia’s desire to maintain a controlling influence over its neighboring countries, therefore limiting NATO’s gains.

“For Putin, this is kind of more do-or-die,” said Peter Loedel, political science professor at West Chester University. “If Ukraine [maintains Western democratic ties] deep in the heart of Russia’s area of influence, he’s personally threatened — his regime is threatened.”

As Ukraine’s government attempts to survive the Russian invasion, the war’s eventual outcome will almost certainly decide whether Ukraine finds itself as a NATO member state.

Ukraine isn’t the only country whose future with NATO is up in the air, though. Georgia has been promised a future spot in the military alliance since 2008, when NATO members declared that both Georgia and Ukraine would eventually be admitted as members. Bosnia and Herzegovina has also been engaged in negotiations with NATO since 2008, and discussions between the two parties are ongoing.

Most recently, Kosovo requested Feb. 27 that NATO speed up its integration into NATO, citing the need for increased security following Russia’s invasion of Ukraine. However, as multiple NATO member states do not recognize Kosovo’s independence from Serbia, Tillman notes that the region’s admission into NATO is highly unlikely.

“I think until all those disagreements can be worked out, it’s kind of a nonstarter,” he said. “I think it’s a lot to take on for what is a rather small country which — you hate to put it in these terms — may not have a whole lot to offer back to NATO.”

Perhaps most interestingly, though, is the possibility of Finland entering the military alliance. Situated along Russia’s western border, Finland announced Feb. 24 that its debate over NATO membership “will change” immediately following the Russian invasion of Ukraine.

Tensions between Russia and Finland have held to varying degrees since the 1940s, when Finland ceded 11 percent of its territory to the USSR as a result of the Winter War and subsequent Continuation War. Those territories remain under Russian control to this day.

While the threat of Russian coercion has pushed Finland into stronger ties with Moscow, Farkas suggests that this may be Finland’s chance to seek deeper military ties with the West.

“The Finns have always felt they didn’t have options, simply because they’re on the [Russian] border and they could so easily be influenced economically and crushed militarily,” he said. “But this seems to be an option whereby the Finns can make a statement to stand with their Scandinavian partners to join NATO, and I think that’s likely.”

Russia has not taken Finland’s statements lightly, however. In response to Finland’s statements on potential NATO membership, Russian foreign ministry spokesperson Maria Zakharova threatened Finland and Sweden (who has made no public statement in support of full NATO membership status) with “military and political consequences” if either nation attempted to join the military alliance.

“That strikes me as nonsense,” he said. “The Russians have no muscle, having spent all of their soft power on this invasion. They have no capacity to influence either Finland or Sweden’s decision. Both of those countries will make their own independent decision. It will not happen.”

Perhaps the greatest concern raised by Russia’s invasion of Ukraine, though, is the potential for armed conflict to break out between Russia and a NATO member state, invoking NATO’s collective defense principle and sparking a third world war. But while that outcome is theoretically possible, Farkas again suggests that both parties — and particularly, Russia — will avoid such an outcome at all costs.

“The truth of the matter is, I can’t imagine the Russians calculating that they could survive such a conflict,” he said. “They’re not a power that can defend itself efficiently. They’re not a power that can be genuinely confident about their military muscle and capability. They’ve got problems about internet security and discipline. They’ve got problems with military budgets. There are problems that the typical person doesn’t see, and I think it’s very unlikely that they consider that a war of any scale larger than what they’re currently involved in is survivable by them.”

“If [Russia was] having sweeping success, if they had anticipated correctly that most Ukrainians would simply roll over and feel a brotherly Slavic identity, then [heightened aggression] could have resulted,
he said. “But nothing like that’s happening. The male [Ukrainian] population is going to fight to the end. In spite of the incredible devastation of the infrastructure, the housing and the cities, Ukrainians will tell you they’ll rebuild! No, I think the Russian posture is increasingly tentative.”