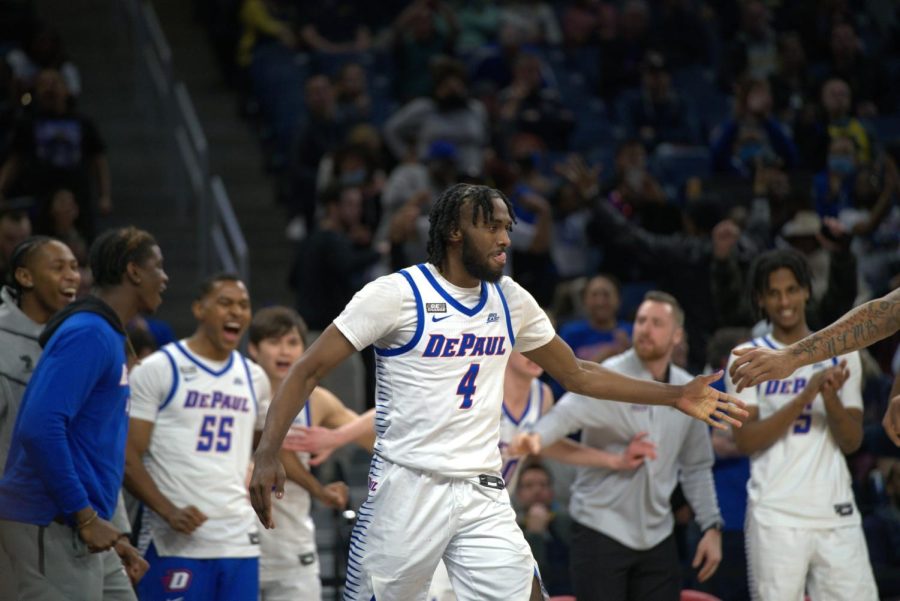 DePaul senior guard Javon Freeman-Liberty celebrates with his team during a 91-80 victory over Marquette on March 2.

Tony Stubblefield’s first season as DePaul’s men’s basketball head coach has been nothing short of a success. Although the team struggled in conference play, finishing with a 6-14 record throughout the regular season, the season was a competitive one overall, something that is being noticed around the Big East.

To start the season, the team recorded a 9-1 against non-conference opponents, showing promise early on. But the honeymoon phase did not last long, and the team went on downhill when conference play began.

The Blue Demons were able to build leads heading into halftime but often faltered in the second half, losing those leads and ultimately the game.

“We have to get some more production inside,” Stubblefield said after one of Freeman-Liberty’s career nights in a loss to Villanova. “[Javon] played a great game, but we cannot put it all on him. We got to have a second, third and fourth scoring option. Guys need to step up offensively. That is where we are going through some lapses of not having that scoring option.”

Then the team got the injury bug. Freeman-Liberty was out for some time with a groin injury and other injuries occurred along the way, including an ankle injury for sophomore forward David Jones, the team’s second leading scorer, alongside a hand injury for senior guard Javan Johnson.

Injuries combined with inexperience and negative trends on both ends of the floor led to consecutive losing streaks in the conference stages.

But Stubblefield remained positive. He was reminded of his time at the University of Oregon as an assistant coach during the 2013-14 season, where the team lost five of its first six games in conference play before managing to finish third in the conference and participating in the NCAA Tournament as a 7-seed.

“You have to stay positive and connected and you can run off five or six wins, but you have to get that one win first,” he said. “That year [at Oregon] we lost some close games and some tough games, but you cannot give in.”

“We cannot take our foot off the gas pedal just because we are up five or six points,” graduate forward Brandon Johnson said. “Other teams don’t do that against us, so it doesn’t make sense for us to do that to them. As long as we play a full 40-minute game and keep our minds focused on each and every possession, then the whole situation will change.”

The team struggled with completing 40-minute basketball games all season long — one of the main factors behind their record. But the six conference wins came in the second half of the season, showing signs of improvement. Teams across the conference acknowledged change was coming to Chicago’s team.

“DePaul is athletic and Stubblefield is doing an unbelievable job,” UConn head coach Dan Hurley said after their January win against DePaul. “To be down Freeman-Liberty and put up that type of game, Stubblefield really got some good things going here. They way Stubblefield has those guys playing this year, these guys get after you.”

“I thought [DePaul] was well prepared,” St. John’s head coach Mike Anderson said after their recent loss to DePaul. “They did a good job of attacking us and getting to the free throw line. When you let them deep in the paint, they’re going to make something happen. They are going to attack and they will get after it. They are a blue collar kind of team.”

Stubblefield’s leadership with his star players being out in consecutive stretches have become a testament to the competitive culture he has built so far. Veteran players have assisted Stubblefield in being leaders to establish the visual culture that Stubblefield wants to implement.

“[I learned] to stay calm, stay together and stay with your teammates because when the game gets tough and somebody gets their way the team can get ugly,” Jones said. “It’s been kind of hard, but I feel like I’ve been doing a good job of keeping the team together.”

Now that the regular season is over, the team is now heading into the Big East tournament as the ninth seed, hoping to make a run for the conference title. Coming off three wins in their last five conference games, the team’s momentum has a chance to shock the world.

Their first chance will be against seventh-seeded St. John’s, whom they defeated 99-94 two weeks ago at home, on Wednesday at 6:00 p.m. on FS1.