“I feel like I’m a bit headstrong in the sense where I don’t give up easily. I don’t quit things. There are times when I need to quit things but I just don’t because I’m so headstrong about it. I’m very energetic. I try to be joyful in everything that I’m doing and I’ve found that my friends are drawn to that. They’re like ‘Dang I like being around you because you have such positive energy.’ And I think that’s the biggest compliment ever. Hardworking [is another one]. It goes hand-in-hand with headstrong. I have a goal and I really want to get there and I’m going to do what it takes to get there.”

“[I would define myself as] queer, creative and a student. [Since coming to DePaul] I definitely have a better relationship with ‘student.’ I never really liked being one in high school or before. I definitely like school a lot more now. I don’t think the other two have changed much.”

“Kindness is one of my big things, so kind is very much so I have always tried to describe myself with and live up too. I’ve always thought of myself as caring and trying to be there for my friends. I’m rather outgoing, that’s something my teachers have always described me with. I used to get in trouble for being talkative in class. In terms of more ‘in the box,’ I am in the LGBTQ community and I have identified as bisexual for a very long time, sometimes I switch off and on with the term queer because it’s easier and more encompassing. I’ve identified as bisexual since the seventh grade but I’ve been able to be more out about it since coming to college because I came out to my parents so it’s easier to be out in college because no one really cares. I’ve always been very spiritual so I don’t necessarily fit into a religious box, I’m still figuring out which is something that has changed since coming to college but I like to label myself as Christian. I’m an eagle scout too, all my friends know me as boy scout.”

“I would say [I am] bold, tenacious, confident and inquisitive. I think they define me simply because for a long time I only acted as people expected me to. I would never ask myself ‘What do I want?’ Or ‘Who am I?’ And now I’m at DePaul and I’ve been able to step out of that little bubble and I’ve been able to answer those questions and live my truth. Being an advocate and being able to public speak on issues and study those issues at DePaul is nice because I couldn’t really do it at home. I would say Sankofa Black Student Formation [has made me feel the most outgoing here at DePaul] with them hosting so many events for not just Black students, it’s for Black students but they invite everyone who is wanting to be a part of the family. Being able to see people here like me has been really affirming and really validating.”

“For a lot of school projects we would have ‘I am’ statements, so I would say one of the words that would define me is open-minded because I’ve always been someone who is really accepting of other people. I can remember, as a kid too, I would have friends from different walks of life and that evolved to now, in college, I’ve become really tolerant. Another word that defines me now is ‘musician’, I’ve been starting music and I’ve always loved music, I’m becoming myself as an artist now. I have a Spotify and I’m in the process of releasing an EP right now which is really cool. Coming into my own as a musician and as a lover of music, because I’ve always been like that, is really cool. [Since coming to DePaul] I’ve become more independent and I’ve become more myself. When I was at home I felt a bit restrained because, as a queer person, I identify as bisexual, I never really got to express that side of myself at home so having the freedom to have fun with my identity is so cool.”

“[I would define myself as] creative and thoughtful. Creative because I had always been in a creative field and I realized being creative is about more than just doing theater, it’s about how you approach things and how you think about things. It took me a really long time to realize that. I’m thoughtful because I try to be really cautious about everything that I do and how I do things. Especially in today’s world and trying to make an impact on things. When I first came to DePaul I thought I was creative because I’m in theater and I do art. Then after graduating and working for a couple of years in my industry, I was scared that I was losing that sense of myself and I couldn’t identify myself as creative anymore. But coming back to school and thinking about it more and what it means even more and how I still work in theater and how important that means that I came back around to it and now I think about it in a completely different way.”

“I would say I am quiet, shy and independent. These words define me because they all make up my entire personality. I’m a very quiet person and even back home in Indiana I had such a hard time making friends. It’s one of my weaknesses in my personality, I’m very quiet as a person and I have a hard time making friends with other people. I’m very independent because I do a lot of things by myself. I go everywhere by myself at this point, book stores, the art museum and visit little neighborhoods. Sometimes I get lonely but sometimes I’m happy to be an observer rather than an observee. I like people-watching. When I was in Indiana I used to hate being alone, I would always hang out with the friends I did have. We would go to downtown Indy and do the same six things, we would go to Broadripple and Brown County together. Even when I got my first tattoo I had someone with me. But since getting to DePaul it has forced me to become comfortable being by myself.” 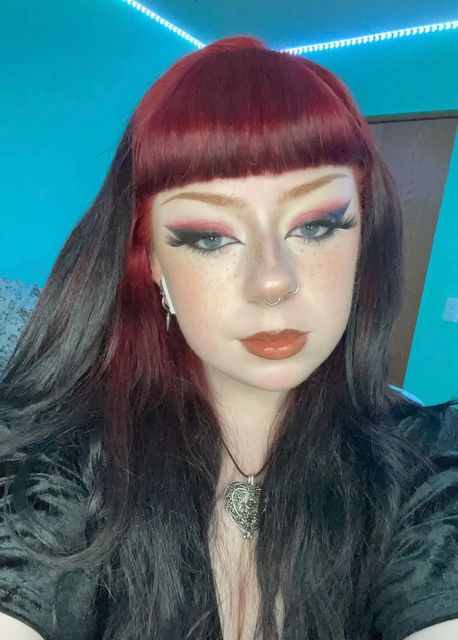 “[I would define myself as] intelligent, strong, and creative, these are all aspects of myself I’m the proudest of and have worked to enhance. Coming to DePaul has strengthened the words I use to define myself. I am challenged to be intelligent, strong, and creative every single day. I would recommend that incoming students do their best to be involved in some way. Whether it’s in a specific class, club, your dorm floor, or anything. Getting involved in some aspect of your new life at college is the best way to find success.”

“I would define myself as a stoic because I don’t get very emotional. I would also define myself as a humble person because I don’t like standing out but I do like being down to earth. Coming to DePaul has not changed the words I define myself with, because deep down my personality and temperament have always been a certain way. However, I would say that I’ve become more open and sociable lately. My advice to future students would be to get out of your comfort zone. Join a club or organization and socialize. College is definitely not just about the grades. 6. I would say that getting your act together is important in College. Balance between work and life is important to master.”