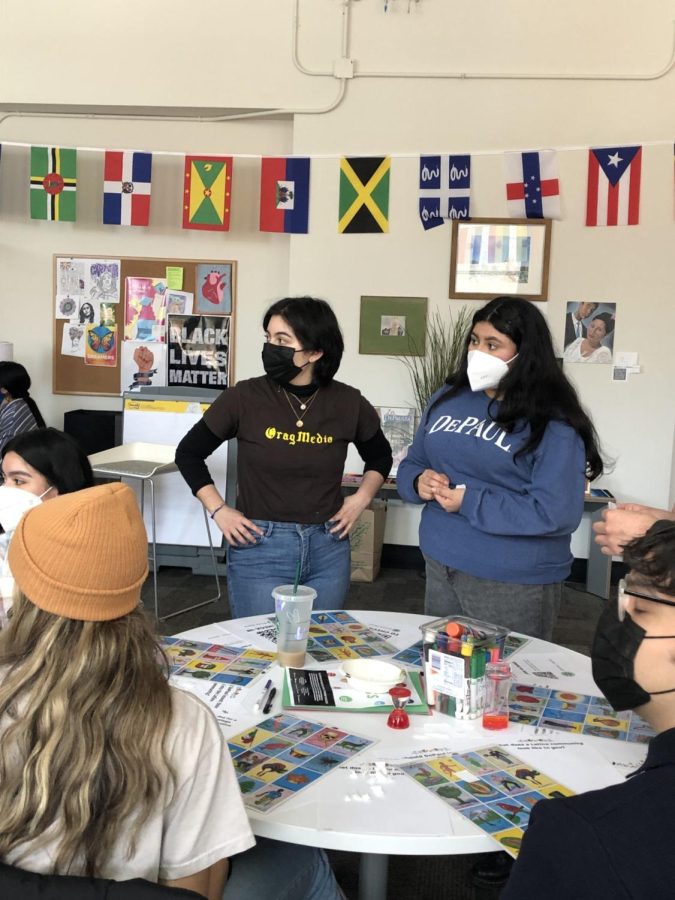 Students participate in a game of loteria during their meeting. MESA aims to support Latino students of all backgrounds.

The student organization Movimiento Estudiantes de Solidaridad y Apoyo (MESA) held its first event of the year on Feb. 25 in the Latinx Cultural Center. The students played a couple of lottery rounds while learning about MESA’s work.

MESA’s mission is to “answer the call for what needs to be done not only within the Latinx community of DePaul but also in the greater Chicago area.”

By facilitating events throughout the school year, they hope to provide social, professional, academic and mental health services while emphasizing their cultural ties.

Emily Vallejo, president of MESA, said she was a little nervous about her first official event in that role.

“We really wanted to have a good first impression,” Vallejo said.

Around 20 students attended the first MESA event — more than they expected.

“It was really gratifying to see everyone communicate with each other, that was the goal of the event,” said María Martínez, president of the MESA Social and Academic Committee.

MESA’s board of directors is made up of nine members. Vallejo is driving social justice work at MESA, and other board members have other ideas on their minds as well, including career and academic outreach for Latino students at DePaul.

The board members are supported by Mariela Aranda, who is MESA’s faculty advisor.

MESA’s started when Vallejo and co-chair Evelyn Barrios met and talked with other students about creating a space for Latino students at DePaul.

“Our first session was great, we exchanged each other’s ideas,” Martinez said.” The conversation really pushed us to continue planning for MESA.”

Francisco Patiño, president of the MESA Culture and Community Committee, says that the club “was born from the desire to be together.”

“We [Latino students] see each other in class but we don’t see each other outside of class,” Patiño said.” One, because there is no room for us, where are we going? We created this space so that we could be together and share it with other students.”

“We are thinking of sending out surveys to get an idea of ​​what people would like,” Vallejo said.

Until then, the students who were present had a great time at the first MESA event. They are excited for what is to come.

“I am excited to see the potential of the organization because I know that sometimes you can feel isolated in classes, especially at DePaul in general,” sophomore Lila Nambo said. “I really appreciate it.”

“It’s really cool to find people who relate to you and have been through the experiences you’ve had,” O’Connor said.

For other students, like freshman Annette Macias, MESA provides an opportunity to connect with their roots and make new friends.