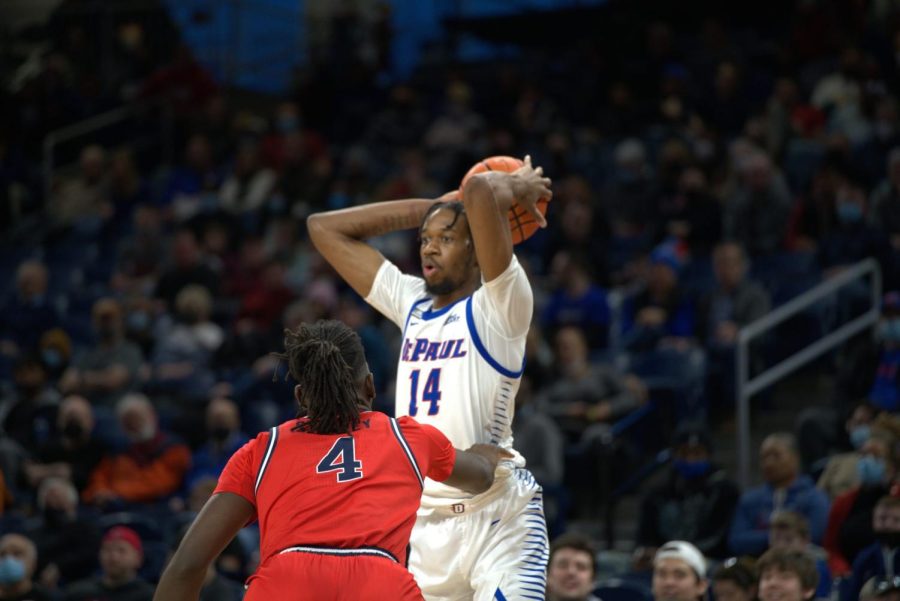 DePaul junior forward Nick Ongenda looks to pass the pass the ball during a game against St. John's on Feb. 27 at Wintrust Arena.

NEW YORK — DePaul finally has something it has rarely had entering a Big East Tournament — momentum.

The Blue Demons won three of their last four regular season games to close out Tony Stubblefield’s first season in Lincoln Park with a 15-15 overall record and 6-3 in the Big East, a stark improvement from previous years.

It has been a rare occurrence for DePaul to enter the conference tournament with some momentum in the final few weeks of the season. This is a program that has become accustomed to finishing in last place and only winning two or three conference games.

Not this season. Not with a new head coach. And certainly not with Javon Freeman-Liberty, who led the Big East in scoring this year at 21.9 points per game. This year, DePaul finished in 10th, one spot above a winless Georgetown team

With a newfound energy that has been missing in the program for years, DePaul will face St. John’s in the first-round of the Big East Tournament at Madison Square Garden Wednesday night.

These two teams played each other 10 days ago in Chicago, with the Blue Demons winning 99-94 behind Freeman-Liberty’s 39 points. At the time, that was DePaul’s second consecutive victory, and it would win a third straight game a couple of days later against Marquette.

On Monday, Freeman-Liberty was named to the All-Big East second-team.

St. John’s is known for deploying its high-press following a made basket, looking to create turnovers and generate offense via mistakes from the other team.

The Red Storm managed to force 15 turnovers in the second meeting against DePaul, but they allowed the Blue Demons to shoot 55.9 percent from the field.

Sophomore forward David Jones returned to the court against St. John’s after missing the previous two games due to an ankle injury. He provided DePaul with 24 points and 10 rebounds in the win over the Red Storm.

DePaul did benefit from the fact that it shot 16 more free throws in that game, even though St. John’s attempted 17 more field goals. Both teams also knocked down seven 3-pointers.

St. John’s is led by junior forward Julian Champagnie, who is averaging 30 points per game in two meetings with DePaul this season. Champagnie is known as prolific scorer who can get hot from the field during any point of the game.

DePaul witnessed that first-hand 10 days ago. In the first half, Champagnie only scored five points on 2-of-11 shooting, but he followed that up by pouring in 21 points on 8-of-16 shooting in the second half.

Even though his scoring outburst in the second half was not enough to bring St. John’s back, it’s still a warning sign for DePaul to put more attention on the Red Storm’s leading scorer.

Defense and rebounding are two parts of the game that Stubblefield has stressed the importance throughout this year. DePaul’s scoring defense ranks ninth in the Big East this season, while both offensive and defensive rebounding stats rank near the middle of the conference.

St. John’s doesn’t present a lot of size and length when it comes to rebounding, ranking 11th in the conference in getting defensive boards. Champagnie, an All-Big East first-team member, also leads the Red Storm in rebounding (6.6 per game) this season.

For DePaul, Freeman-Liberty and Jones both grab over seven rebounds per game, helping to start transition opportunities. But Nick Ongenda and Yor Anei help provide a different element for the Blue Demons — shot blocking. The two big men have combined to block 99 shots this season.

The Blue Demons have won their last two first round games in the Big East Tournament in 2020 — with the tournament being canceled due to the Covid-19 pandemic before the quarterfinals games could be played — and in 2021.

On Wednesday night, DePaul will look to extend that winning streak and keep its momentum rolling into a quarterfinals match-up with Villanova.