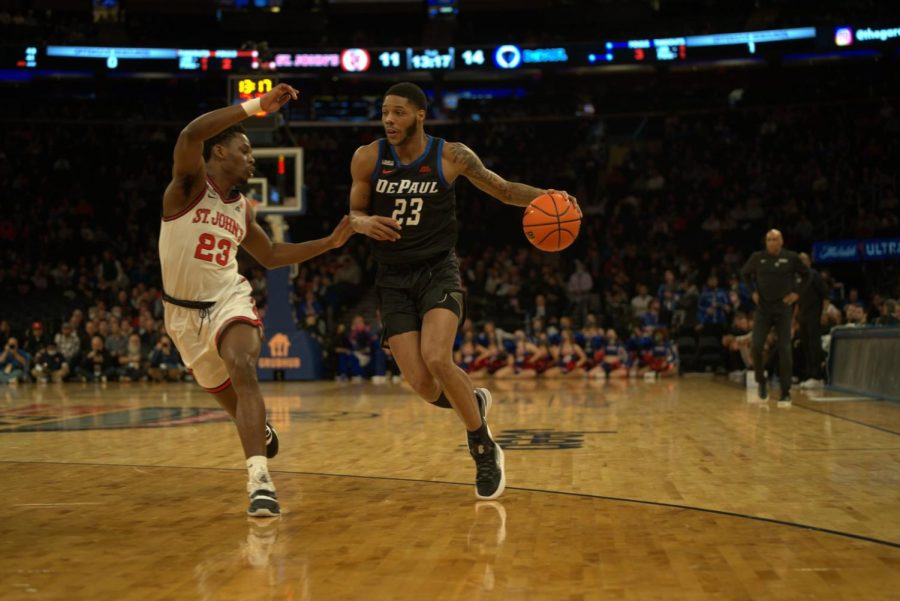 That team that spent 20 conference games building an identity based on defense did not show up in the first-round of the Big East Tournament against St. John’s at Madison Square Garden Wednesday night.

To put it simply, St. John’s played with more urgency and intensity than the Blue Demons, which resulted in a 92-73 blowout victory for the seventh-seeded Red Storm.

“So, again, ran into a very good St. John’s team tonight that played very well and a team that is capable of winning some games in the tournament,” DePaul head coach Tony Stubblefield said.

DePaul began the game playing with energy, especially on the defensive end, which allowed it to build an early 12-2 lead. But the Blue Demons were not able to sustain that level of play.

Instead, junior forward Julian Champagnie took matters into his own hands. He scored seven points during 9-0 run for St. John’s that cut DePaul’s lead to one.

That would just be the start of Champagnie’s scoring outburst in the first half. He had one stretch in the half where he made five straight shots — three 3-pointers and two dunks.

Most of the shots that Champagnie took were uncontested. He had no trouble either getting to the rim or pulling up from behind the arc. The All-Big East first-team member finished the first with half 22 points on 8-of-12 shooting.

“They turned it up a notch,” Stubblefield said. “They got some transition baskets, they got a couple of baskets off turnovers and it changed the game.”

As a team, St. John’s carved open DePaul’s defense time after time. DePaul did not help its case by committing six turnovers, leading to 10 points for St. John’s.

But even when St. John’s had to play in the half-court, it still had no problem slicing up the Blue Demons’ lackluster defense. The Red Storm kept issuing body blows with their own up layups and dunks.

DePaul’s last lead came with 10:53 left in the first half, 17-16. The next six minutes played out in three big runs: St. John’s going on a 10-0 run, DePaul responded with seven straight points to make it a two-point game and then Champagnie had a personal 9-0 run to put the Red Storm up for good.

But the knockout punch came in the final three minutes of the half when St. John’s went on a 11-0 run. DePaul had no answers for St. John’s full-court press, it looked flustered at times and did not match St. John’s energy.

Posh Alexander put the exclamation point on a dominating first half performance when he stole the ball from Javon Freeman-Liberty at mid-court to get an uncontested layup that put St. John’s up 49-29.

DePaul made only one field goal in the final six minutes of the half, a 3-pointer from Philmon Gebrewhit.

DePaul scored 47 points on 55.7 percent shooting in the first half versus St. John’s 10 days. The Blue Demons shared the ball, attacked the paint and played like a team on a mission. In that game, Freeman-Liberty finished with 39 points and David Jones had 24.

Ten days later, St. John’s head coach Mike Anderson made sure that DePaul’s two best players did not have a similar outing against his team.

“We made sure we paid attention to those guys wherever they are,” Anderson said. “I thought we did a good job of forcing their offense out in the court, making other guys have to make plays.”

In the third meeting between these two teams this season, DePaul played timid, at times looked like it was going through the motions and didn’t look to expose a weak Red Storm defense.

There was no magical second half comeback in the world’s most famous arena, instead St. John’s continued to keep its foot on the accelerator. The Red Storm didn’t even need Champagnie’s scoring in the second half, he only scored four in the final frame.

“Their press was a little bit more effective tonight than it was in Chicago,” Stubblefield said.

The momentum that DePaul had entering the Big East Tournament quickly evaporated, and the team had no response following its 12-2 start. The turnover battle paints a complete picture, with St. John’s winning that part of the game 14-2.

The Red Storm had outscored 24-0 in points off turnovers. DePaul did shoot 48.3 percent from the field, but it attempted 16 fewer shots than St. John’s.

Jones finished the game with 11 points on 5-of-7 shooting. He had a relatively quiet night for a player who has become known for his aggressiveness and craftiness around the basket. Freeman-Liberty led the Blue Demons with 17 points.

DePaul’s season ended on a whimper, while St. John’s will look to keep its season alive by knocking off Villanova Thursday night.