Lingering in the shadows: Students look back on stalking experiences, experts assess why stalking occurs 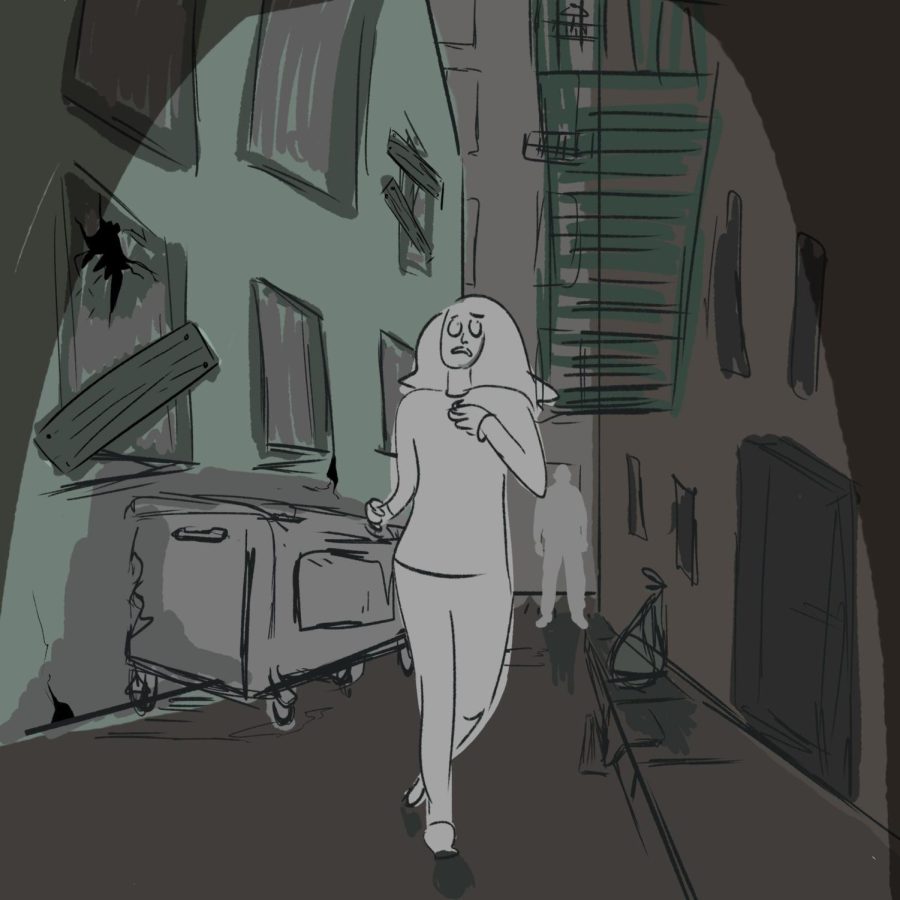 One in six women and about one in 17 men have experienced stalking in their lifetime, according to a study by the federal Centers for Disease Control and Prevention [CDC].

Social media has become one of the newer and more common ways stalkers will victimize people, Megan Greeson, an associate professor of psychology at DePaul, said.

“Any repeated unwanted harassing and threatening contacts are a form of stalking,” Greeson said. “Each time a new method of communication occurs, stalkers can use that. Now stalking can occur on social media. I think about [United States Representative for New York] Alexandria Ocasio-Cortez and other prominent figures, especially women of color, and the huge amount of stalking, including physical threats, they experience on social media, in part because social media allows more people to reach them.”

DePaul freshman Emma Kate Bretzlaff, 18 years old, said she was a victim of stalking as a result of social media when she was 14 years old.

She said she gained the affection of a 17-year-old male junior, whose feelings seemed more obsessive than a simple crush, Bretzlaff realizes in retrospect.

The boy initially came off as kind, but after a while Bretzlaff said he would randomly appear wherever she was. A coincidence, that’s all it was, she thought. She said she thought everything was fine until she started noticing him in every place she was.

When she would walk home, she could hear his skateboard gliding across the nearby pavement. She would look back and there he was, only to quickly vanish as his cover was blown. Bretzlaff said there were even times he would follow her back to her house and circle the block she lived on.

The sound of skateboard wheels became ingrained in her head.

Bretzlaff said after a period of limited communication on social media with the boy, she noticed he stopped appearing, or so it seemed.

“My friend and I are at the park and one of us put a selfie of us on our story,” Bretzlaff said. “I look up and he’s circling the park, just watching. We’re scared to leave because he’s just circling and circling.”

Eventually, the boy left Bretzlaff alone and went on to be interested in her friend, who was 13 years old.

Bretzlaff is not the only one at DePaul who has been stalked. DePaul freshman Jonah Elbaum said he was also stalked through social media at a young age.

Elbaum, now 19 years old, said he was stalked when he was 15 years old by a girl in a theater program he was involved in outside of school. She was also 15 years old.

Elbaum said he participated in theater programs every Friday at the Fifth Avenue Theater in Seattle, Wash., which is where he met the girl.

Elbaum said the girl pushed herself into his core group of friends every Friday, even going as far as adding herself into the group chat they had. He said the night things began to get even weirder was when his friend group went out to see Mary Poppins, and she decided to sit next to him.

“We sat next to each other. I fell asleep and I woke up and she was holding my hand,” Elbaum said. “I moved my hand away and after that we stopped talking for a while.”

Though there was a moment of disconnect in communication, Elbaum said the girl started randomly FaceTiming him on Instagram every day. Eventually, she told him over the phone that she had a crush on him.

“I was like, ‘I told you I have a girlfriend. Can you please stop talking to me?’” Elbaum said.

After that experience, Elbaum said he stopped responding to her but she would still send him about 15 posts on Instagram a day. She would even text him “I miss you,” “How are you?” “Why aren’t you talking to me?”

To counteract the situation Elbaum blocked the girl on everything but even with him blocking her, he said she still didn’t get the hint.

Elbaum said she began to ask his friends for his phone number.

“I got about 20 messages from my friends asking about that,” Elbaum said. “What I think happened was she went to my [theater] show and got the program so she contacted everyone on the cast list asking for my phone number.”

Greeson said there are a multitude of reasons why someone becomes a stalker. But, she said, a large part is the ability to have control over someone.

“Stalking is a form of power and control,” Greeson said. “By monitoring the victim and engaging in repeated unwanted contact, the stalker is using their power to control the victim.”

She said it originates from “a sense of entitlement — they feel that they have a right to do this even though their victim does not want them to and feels harassed and afraid.”

Another reason stalkers are becoming more common is that society is accepting stalking as putting up a good fight to win someone over, Greeson said.

“As a culture, we glorify repeatedly contacting someone who you want to date as romantic, like good on you for not giving up,” Greeson said. “But in reality, that person is ignoring what the other person wants and that’s a major red flag. We need to teach people starting at a young age that if someone doesn’t want to date you, then you accept them and do not contact them against their will.”

Bretzlaff said an important place to start to protect oneself and others is to tell a trusted person when a person seems off.

“There is nothing too little to speak up about,” Bretzlaff said. “Don’t wait until it becomes big. If someone is just giving you weird looks and maybe saying something off-putting, say something. Even if it’s just to a friend or to a professor, tell someone when it’s small because your gut is always right.”