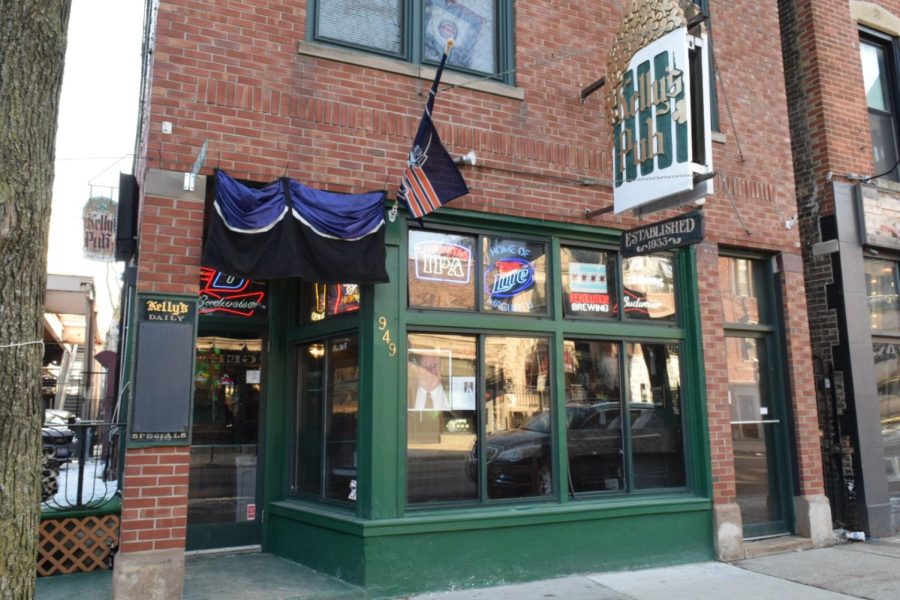 To the untrained eye, the small Irish pub next to the El tracks in Lincoln Park may seem unremarkable, except for the sign depicting a beer mug overflowing with shamrocks. But take a closer look, Kelly’s Pub is a time capsule of Chicago history.

The day after Prohibition ended in 1933, allowing the legal sale of alcohol for the first time in 13 years, what was originally a candy store became the El Side Tavern under its new owners, Frank and Loretta Kelly.

Not much has changed inside 949 W. Webster Ave. A dim green light illuminates the evenings, various sports games play on the TVs and patrons sit around a large bar and tables etched with Greek letters from DePaul’s fraternities. A classic Irish green wall rounds out the pub experience, flanked with family photos from the bar’s past. In the back corner lies a small kitchen where burgers, onion rings and mozzarella sticks fly from the window. On Wednesdays, the wings, now 75 cents, always draw a crowd.

DePaul student Cooper Angell and his friends go to Kelly’s on a weekly basis for their food and drink specials.

Angell spoke about the pub in comparison to the DePaul favorite bar McGee’s, which is across the street.

“People [aren’t] throwing up on the floor,” he said.

Angell added that he believes the cleaner environment and wider range of clientele explain why they favor Kelly’s over McGee’s, which attracts mainly college students.

Anthony Hernandez, a Kelly’s bartender — and customer on his off-days — said the patrons of Kelly’s Pub represent different slices of Lincoln Park life.

On Wednesdays in particular, the mixed bag is on full display. There’s an ecosystem within the pub: The regulars at the end of the bar near the kitchen, DePaul students moving tables together to fit their big groups and construction workers huddled in a corner near the door. Even with rap music blasting through the speakers, each group sits in harmony.

One of these regulars, Brian Huebner, sits at the end of the bar, paying no attention to the sea of college students around him. A Lincoln Park native, he became friends with the late John Kelly, who was the owner of the bar until his death in 2019. Now, Kelly’s daughter Megan is in charge.

According to Huebner, Kelly’s used to be a commuter bar but became more popular as DePaul students came from out of state and the Blue Demons basketball team became prominent.

In fact, he described Lincoln Park in the past as “dingy” with mostly blue-collar workers.

While watching Jeopardy! on a Friday afternoon, Huebner recounts some of his favorite memories with his late friend.

Huebner noted that when John Kelly was in charge, the bar remained open every day, including Christmas Eve and Easter, where he would cook hot meals for elderly people in the neighborhood during the 1970s and ‘80s.

One moment in particular that stood out to Huebner was a trip to Key West with John Kelly and their wives.

The winter trip, known as the “Duval Crawl and the Duval Fall,” took place about 10 years ago. According to Huebner, their goal for the evening was to visit every bar on Duval Street, the main drag on Key West. But as the night wore on, the two imbibed too much. While walking back to their respective hotels, John Kelly — who had poor eyesight — attempted to step over a chain stretched across a driveway, fell and broke his shoulder.

The bar is still owned by the Kelly family, with John’s wife, Paulette, listed as a secretary and treasurer of their company, Clover Corporation, according to the Illinois Secretary of State.  Kevin Kelly serves as the president of the corporation.

In recent years, city records show Kelly’s Pub has earned a clean bill of health, passing all city inspections, including the most recent one in October. But a few years back, city health inspectors found some unsanitary conditions.

In June 2016, the pub failed a health inspection due to improper temperature of their walk-in cooler. They also had back-to-back failed inspections in 2017 and 2018 for safety issues with their ice machine. According to the report, there was a “black slime” on the inside of the machine during the two inspections. Kelly’s Pub was instructed to sanitize the machine. The problem was fixed, and Kelly’s has enjoyed a clean bill of health from the city ever since.

The DePaul favorite also has a star-studded past with Hollywood. The pub was even featured in the 1986 film “About Last Night,” starring Demi Moore and Rob Lowe. Chicagoan Jim Belushi, brother of the late comedy star John Belushi, also has a supporting role in the movie about a one-night hookup that leads to a meaningful romance.

According to Hernandez, Kelly’s built their outdoor patio to accommodate a scene in the film. Owner Megan Kelly said that all of the stars’ significant others, including Melissa Gilbert and Emilio Estevez, came to the pub between filming. Megan happened to be on set as an extra, along with everyone who was at the pub that day.

Pub employees say other celebrities have visited Kelly’s over the years. CSI actor William Peterson, The Bold and the Beautiful actress Lauralee Bell and the heavy metal group Guns n’ Roses have all stopped in for a drink at the pub.

By the time evening comes around, expect to see a much fuller house — especially on Fridays. Former DePaul student Gabrielle Uluhogian often finds herself there on Friday nights, even though she no longer lives in the area.

“When I was in college, I lived right off Belden and Seminary, so walking distance from the bar,” Uluhogian said. “I ended up spending a lot of time there my senior year of college, and after getting to know the bartenders and other customers, I’d say my friends and I definitely became regulars.”

Uluhogian says that she and her friends still make time to go to Kelly’s at least once a month.

“Even though I’m not in college anymore and I don’t live as close, when I go to Kelly’s, it’s like nothing has changed,” she said. “Honestly, it’s a pretty nostalgic place.”