Drug decriminalization: It isn’t a perfect solution, but it’s a step in the right direction 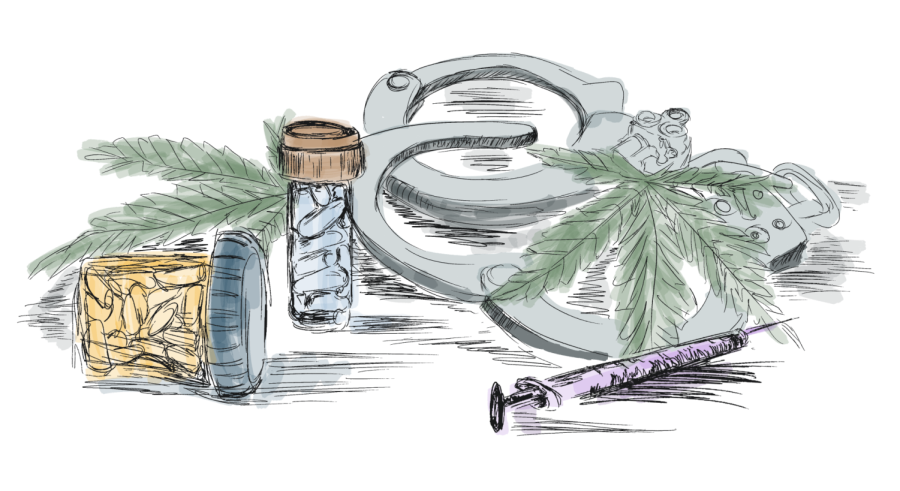 The criminalization of drugs ignores the societal issues at the root of drug abuse, addiction or sale. Addiction to illicit drugs can often be a side effect of living in poverty and mental illness. Decriminalizing them is not a perfect solution, but it’s a step in the right direction.

“There is a social control factor,” said Xavier Perez, a professor of criminology at DePaul. “Drugs have always been commonly associated with people of color… You could go back and see where cocaine was made illegal in its connection to African Americans, marijuana and its connection to Mexicans.”

“Drugs have always had a very much racialized and a class sort of perspective in our society,” Perez said.

But drug decriminalization may still be part of the answer to a larger historical issue of oppression and mass incarceration in the United States.

“The benefits of decriminalization would include a decline in prison populations,” said Joseph Mello, an associate professor of political science at DePaul. Mello is currently writing a book about cannabis reform.

People who are incarcerated for drug possession often deal with repercussions long after their time in prison. In some states, people with felony convictions or people on parole are barred from voting. I would argue that voting disenfranchisement is a violation of civil rights — being a recovering addict (or hopefully recovering, since prisons are far more punitive than rehabilitative) shouldn’t keep you from exercising your rights in a democracy.

Decriminalizing drugs would “signal a move away from the punitive approach to drug use that we have today, towards more of a medical model,” Mello said. “Under this approach, people suffering from substance abuse and addiction would be encouraged to seek treatment, not put in jail.”

“Decriminalizing drug use would not only eliminate incarceration for possession offenses, but it would reduce the number of people needlessly burdened with criminal records, which make it more difficult to find employment, housing, education, and stability,” said Ben Ruddell, an attorney and director of criminal justice policy at the ACLU of Illinois.

“When those things are lacking, it’s more likely that people will continue to struggle,” Ruddell said.

These struggles may lead people to commit desperate crimes that put them back in prison. The recidivism rate in the U.S. is one of the highest in the world, with two out of three former prisoners being rearrested. Lower incarceration rates would place less of a financial burden on taxpayers.

Illinois incarcerates “thousands of people for simple drug possession,” Ruddell said, both in county jails and prisons. “If someone needs treatment, they should be connected to community-based services, which are both more successful and more cost-effective than trying to coerce people out of using drugs, using punishment or the constant threat of punishment.”

“That strategy has failed miserably and compounded the harms associated with drug use,” Ruddell said.

Decriminalizing drugs would also reduce the social stigma around drug use, according to Ruddell. Those who are against decriminalization argue that this would lead to a rise in drug use and other crimes.

“There would still be people incarcerated for drug offenses, even if they were decriminalized, but it is a safe bet that the size of the U.S. prison population would decline precipitously if decriminalization occurred,” Mello said.

Another fear around decriminalizing drugs is the potential to create a gateway drug scenario, causing more people to use drugs and develop addictions. That may not be the case, according to Perez.

“Some of the European societies that have decriminalized their drugs, even some of the more sort of serious drugs, the more addictive drugs — it’s not ideal,” Perez said. “They deal with their issues of addiction and their issues of crime like everyone else, but it is a fraction of the money and the social cost that’s associated with our policies.”

“I don’t mean to suggest that we’re going to create a utopia by decriminalizing drugs, but I just think that after this failed experiment of our policies for the last 40 something years… It just doesn’t seem like there’s just gonna be any sort of end to it or any sort of positive conclusion,” Perez said.

It’s time to change how we view drug use — not just our own personal stigmas, but on a federal level as well.

“Let’s just pivot,” Perez said. “We failed at these policies, the war on drugs and the tough on crime. Let’s just try something other than punishment as our solution.”

Ultimately, decriminalizing drugs is not the only answer — or even the best one. We need to address the root causes of drug use, like poverty, and continue to fight against racial discrimination in arrests and sentencing.

“We need to stop criminalizing people who use drugs and properly fund mental and behavioral health services statewide,” Ruddell said. “We will need to make substantial and sustainable investments to provide the education, housing, employment and safety that people living in all of Illinois’ communities want and deserve.”