Women’s basketball: DePaul gears up for play-in game against Dayton 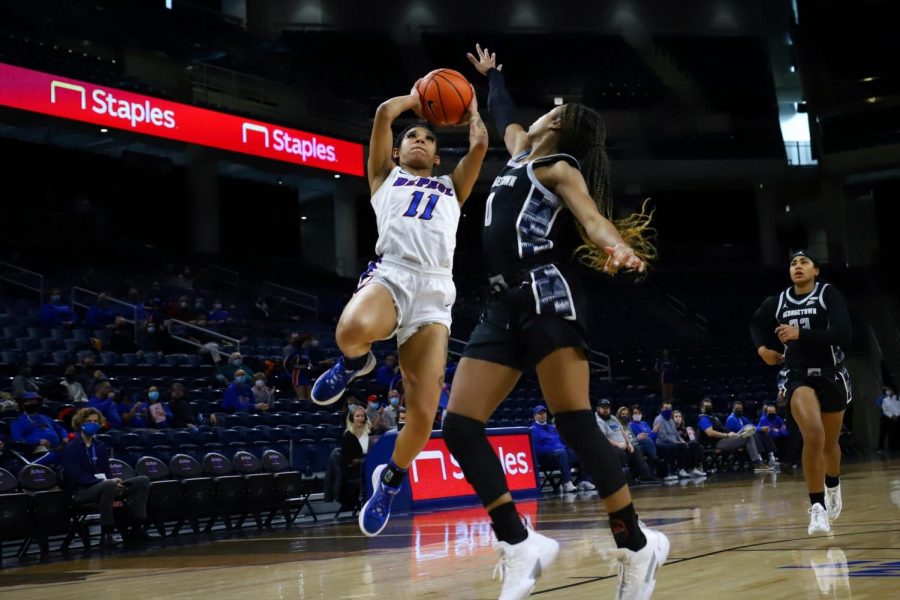 From out of nowhere, the DePaul women’s basketball team has snuck in and secured a spot in the upcoming NCAA Tournament. They will be taking on Dayton in an opening round play-in game on Wednesday in Ames, Iowa.

“It’s everyone’s dream to play in the NCAA tournament and possibly win it and it’s an amazing feeling,” freshman forward Aneesah Morrow said. “Our team’s expectation is to focus on one game at a time and it’s important to only focus on your opponents that you have in front of you.”

During Monday’s press conference, head coach Doug Bruno, sophomore guard Darrione Rogers and Morrow made sure to share and highlight their experience together as they awaited the news on if the Blue Demons qualified for the NCAA Tournament.

“We watched it (results) together as a team in a small get together and we had dinner, it was truly emotional,” Bruno said. “There was no fake emotion last night, it was very genuine and we’re very thrilled and excited to be able to accomplish this.”

The Blue Demons finished 22-10 this past season and 14-6 in conference play; the team recently lost 105-85 against Marquette in the Big East Tournament. After an unfortunate tournament loss, the Blue Demons didn’t know what to expect as their NCAA Tournament aspirations were up in the air.

“The whole thing happened pretty fast and the emotions around the room were amazing, like I was still a little bit shaken up later on just full of emotions,” Rogers said. “It’s truly a blessing to hear our name called.”

In their opening round matchup, the Blue Demons are set to square off against an imposing Dayton team who looks to continue their stellar 2021-22 campaign. They went 25-5 on the season and 14-1 in conference play.

“I think it’s going to be a good matchup, they have some good guards, a couple bigs as well too,” said Rogers. “Overall, they’re a good team and if we play the way we’re supposed to play, we’ll take care of business.”

Bruno emphasized during the press conference how much respect he has for the Dayton basketball team and that the Blue Demons are in for a tough opening round matchup. DePaul struggled towards the end of the season losing three of their last four games and Dayton will be no easy task. Bruno believes they are well prepared and ready to go.

“Dayton is very well coached, Shauna Green has done a great job over there,” Bruno said. “They’re strong, big and athletic and the players all have guard skills. They are big players that have the ability to move, pass and share the ball, it’s a good strong matchup. The Big East will have us prepared for it.”

The main takeaway from the press conference was how motivated the Blue Demons will be as they head into the tournament as underdogs. They want to prove that they truly belong there and don’t plan on going down without a fight. The players are full of inspiration and want to do some damage now that they are officially in.

“I’m very motivated and I have individual goals that I set for myself and I know if it’s me against me that I can accomplish them,” Morrow said. “As a team, I would say that we are extremely motivated and we had an amazing practice yesterday, probably the best we’ve had all season.”