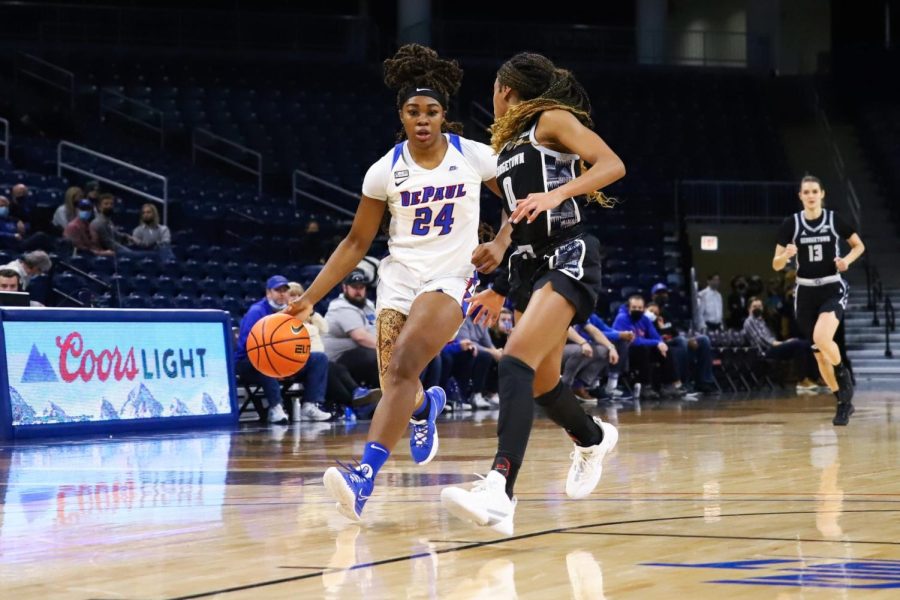 Forward Aneesah Morrow dribbling around a Georgetown player on Jan. 16.

Since entering college, DePaul freshman forward Aneesah Morrow has set both program and Big East records that stood for decades.

Morrow added to her growing list of accomplishments as she earned All-American honors from the Associated Press on Wednesday. The Chicago native was named to the second-team, joining Ayoka Lee, Ashley Jones, Khalya Pointer and Elissa Cunane.

Morrow has now been included in three All-America teams, with Sports Illustrated and The Athletic including the freshman standout in their teams last week. Furthermore, The Athletic also named her the National Freshman of the Year.

It has not taken long for Morrow to adjust to the college game. In her first game this season, she scored 31 points and nine rebounds. And as the competition got harder, Morrow’s performances only stepped up.

She finished the regular season averaging 21.7 points and 13.8 rebounds per game.

DePaul finished the regular season with a 22-10 overall record and 14-6 in the Big East. The Blue Demons were squarely on the bubble heading into Selection Sunday last weekend, but the committee selected them for the NCAA Tournament.

DePaul will face Dayton in the First Four in Ames, Iowa Wednesday night. The winner will play No. 6 Georgia two days later.