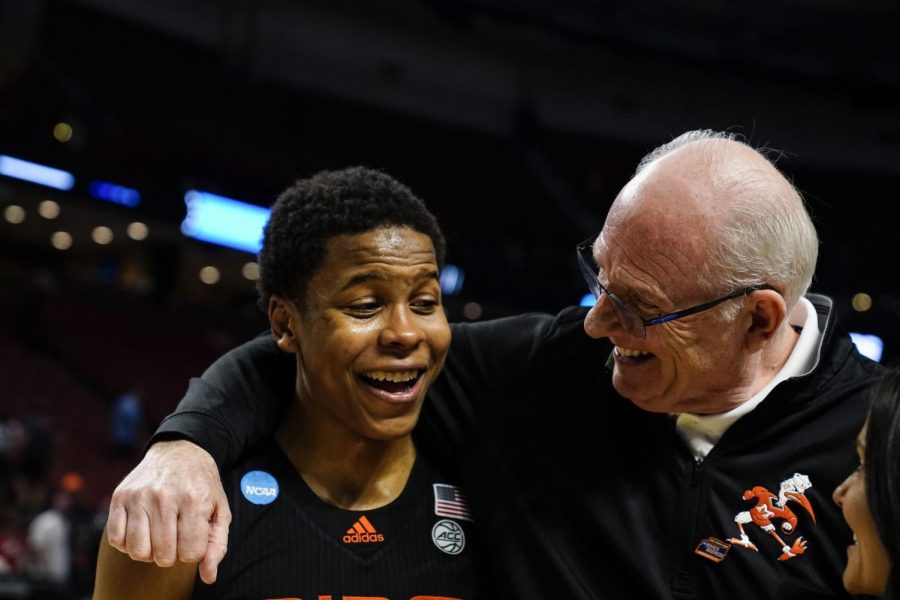 Miami's Charlie Moore, left, celebrates with Miami head coach Jim Larranaga, right, after a win over Auburn in a college basketball game in the second round of the NCAA tournament Sunday, March 20, 2022, in Greenville, S.C.

Before Charlie Moore decided to transfer from DePaul and leave home last year, he had a conversation with his dad, Curtis, about the next steps he should take in his basketball career.

The conversation was simple — Moore’s dad wanted him to be happy.

“You know, really, my dad encouraged me to do it,” Moore said on Thursday. “I came home, first time, [to] go to DePaul, to be closer to my parents. Help those guys out. But I was home for two years. My dad wanted me to be happy.”

Moore initially transferred to DePaul in 2019 to be closer to home and support his father, who suffered a stroke in 2015 and has been in a wheelchair since.

But after DePaul fired former men’s basketball head coach Dave Leitao at the end of the 2020-21 season, Moore received the seal of approval from his father to enter the transfer portal and find a school that will give him the best chance to win.

That’s when Miami decided to give Moore a call.

When Hurricanes head coach Jim Larrañaga and assistant coach Bill Courtney — who worked on Leitao’s staff from 2017-19 at DePaul — saw that Moore entered the transfer portal, they immediately contacted him.

“So when Bill Courtney said to me, ‘Charlie Moore just put his name into the portal, we probably should reach out to him tonight,’” Larrañaga said on Thursday, “I said, ‘I’ll text him right now.’ And I texted him that day, and we got it started.”

Larrañaga recruited Moore in high school and still had his phone number, so he reached out to the point guard about transferring to Miami.

It did not take long for Moore, a Chicago native, to make his decision to go and spend his final year of college in Miami.

Due to Covid-19 restrictions at the time, Moore was not able to do an in-person visit with the program, but they conducted a Zoom meeting and it ended up working out for both sides in the end.

“He chose a place that not only needed him, but allowed him to be the best version of Charlie Moore he could be,” Larrañaga said.

Moore’s college career does not fit the usual path a player takes to reach their final destination. He has been to four different schools — California, Kansas, DePaul and Miami — and has faced different circumstances in all of his previous three stops.

But there is something unique about this final stop. Something that is not alway easy to find in today’s college basketball world, where players and coaches are seemingly always changing schools.

Moore and Larrañaga have built a special player-coach relationship in one year.

“Coach Larrañaga is more like a father figure or a teacher more so than a coach, who is always down on your back and stuff like that,” Moore said. “I feel like when you’ve got a relationship with a coach or your father, you love them [in] a different way. You will do things differently for them.”

It did not take long for both of them to build that relationship.

During one of the team’s first workouts last year, Moore was not medically cleared yet to practice but he was allowed to sit and watch. Larrañaga asked one of his players to do a drill, but that player did not remember initially how to do the drill, so Miami’s head coach showed him so he could remember for next time.

About 10 minutes later, Larrañaga turned to Moore and asked if he knew how to do the drill. Moore’s response made Larrañaga laugh.

“He said, ‘Coach, not only can I do it, I can remember to do it,’” Larrañaga recalled. “Now, do you know how funny I thought that was? I thought it was hysterical, because he was like poking fun, but in such a clever way. And that’s how our relationship began, because I do that all the time.”

About a year later, Moore is the conductor — or as Larrañaga likes to call him, the quarterback — of a Miami team that is 25-10 overall and is getting ready to play in the Sweet 16 against No. 11 Iowa State in the Midwest region at the United Center Friday night.

“It’s a blessing to play here,” Moore said. “I’m from Chicago. I grew up watching Chicago basketball, grew up going to the games and to actually now be playing on the court with my teammates, it’s amazing.”

Miami would not be in this position without Moore’s steady play and leadership all season. While his points per game are down compared to his two years at DePaul, Moore has raised his field goal percentage, 3-point percentage and assists per game while also lowering his turnovers

“Charlie has been amazing at that all season and everybody helps push our offense in transition as well,” Miami forward Sam Waardenburg said.

In Miami’s two wins over No. 7 USC and No. 2 Auburn in the NCAA Tournament, Moore is averaging 15.5 points, 6 assists and only two turnovers per game.

After the Hurricanes’ upset win over Auburn on Sunday, Larrañaga had this to say about his point guard: “He is, for us, our Chris Paul.”

Moore has found a way to come up with big plays all season long, including providing a game-winning assist in overtime against Boston College in the ACC Tournament quarterfinals, but that does not surprise Larrañaga.

“Charlie has exceeded expectations,” he said. “But my expectations were so high, it would be very hard for him to exceed it. But the difference is, with most of my players, it takes a while for them to kind of adopt our system. It took Charlie no time at all.”

Moore’s college career might come to an end Friday night with a loss or, if Miami can get past Iowa State, he will get another opportunity to play inside the United Center Sunday night in the Elite Eight.

Either way, the baby-faced, 24-year-old point guard has no regrets about his college career. Each stop on his way to Miami has taught Moore something about himself that he will be able to carry beyond college.

“I guess, like you said, it’s been a unique experience with me,” Moore said. “But going through what I went through, going from college to college, I’ve learned a lot. I don’t regret anything. It made me who I am today as a person and I’m pretty happy with who I am.”