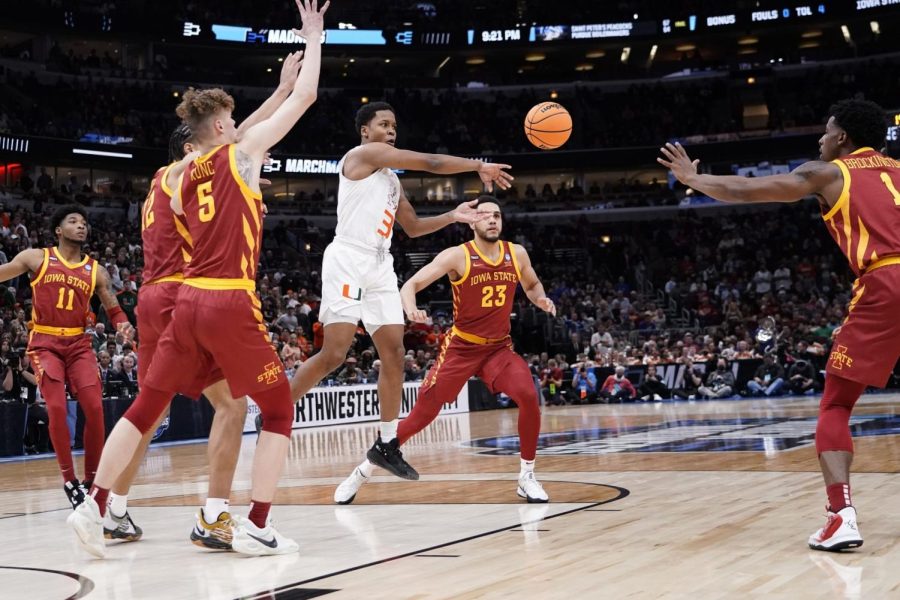 Miami's Charlie Moore passes in traffic during the first half of a college basketball game in the Sweet 16 round of the NCAA tournament Friday, March 25, 2022, in Chicago.

Miami did not need Charlie Moore’s scoring to defeat No. 11 Iowa State in the Sweet 16 at the United Center Friday night.

It just needed Moore to direct play, find open teammates and play smart basketball. That’s what the 24-year-old point guard out of Chicago did.

Miami defeated Iowa State 70-56 to advance to the program’s first Elite Eight appearance, where the top seeded Kansas Jayhawks await to decide who gets to represent the Midwest region in next weekend’s Final Four.

The Hurricanes were able to overcome a lack of scoring from Moore to get past a stingy Iowa State defense, which was holding opponents to 51.5 points per game in the first two games of the NCAA Tournament.

Moore finished the game with only seven points on 2-of-8 shooting. He did not score in the first half. In fact, only three Miami players — Jordan Miller, Kameron McGusty and Sam Waardenburg — scored in the opening 20 minutes for the Hurricanes.

“If you told me before the game that Charlie and Zai [Isaiah Wong] got shut out in the first half, I’d say, how many are we down,” Miami head coach Jim Larrañaga said after Friday’s victory.

Miami is now 9-2 this season when Moore fails to reach at least 10 points. During his two years at DePaul, the Blue Demons were 4-10 in games when Moore did not score in double figures.

At DePaul, Moore was asked to be the primary scorer, facilitator and leader of a struggling program. There were some bright moments in that time, including a 12-1 start in 2019-20, but there were more losses and frustrating stretches in his two years in Lincoln Park.

At Miami, however, there is less of that pressure on Moore to have to do everything in order for the team to have a chance to win.

Moore only shot 1-of-7 from the field and did not score in the first half. But he still managed to have an impact on the game with his five assists and off the ball movement.

“But because our defense has been so resilient, because we’ve made it so difficult for the opponent to score easily, and when we really ratcheted up the pressure, if we get turnovers we’re very efficient in the open court scoring before the defense is set,” Larrañaga said.

Larrañaga called Moore the team’s “quarterback” on Thursday. Well, what is the role of a quarterback? Be a leader. Don’t commit too many mistakes. Get the ball to the right spots.

In terms of getting the ball to where it needed to be, Moore finished with eight assists. The 24-year-old point guard played mistake-free basketball in the second half, with his three turnovers in the game coming early in the first half.

What about that leadership thing? Take this in for leadership and supporting his teammates: After seemingly every made Miami field goal, Moore either did a mini fist pump or raised his arms into the air to celebrate the made shots.

Moore knocked down two shots in the second half that helped keep Miami in front; he also made two late free throws to ice the game.

Regardless of how many points Moore scored in the game, he and his teammates were enjoying the night. They made program history by becoming the first Miami men’s basketball team to reach the Elite Eight, and this comes after they were picked to finish 12th in the ACC this season.

“It’s incredible, but I’m happy,” Miller said. “But I also want to keep going. It’s like trying to find the balance between trying to enjoy the moment but also be so locked in, wanting it so bad.”

As a team, Miami recorded 21 assists, 11 steals and seven blocks. At times, the offensive execution was not pretty — especially from Iowa State — but the Hurricanes managed to make all the big plays when it mattered most.

The Cyclones had several moments where they brought the score to a couple of points, but Miami never allowed them to get within one possession in the final 16 minutes of the game.

The dream season continues for Miami and Moore, who transferred to the ACC program from DePaul last spring. The next challenge awaiting the Hurricanes might be the most difficult of them all, with a traditional powerhouse like Kansas standing in the way of a Final Four berth.

Moore will probably need to have a more efficient shooting night if Miami is to pull off another upset. But, unlike Moore’s time at DePaul where wins and losses were mostly decided by how many points he scored, the Hurricanes have other options to pick up the load when others are struggling.

“We got picked to finish 12th preseason in our conference eight months ago — it’s a long season, but at the beginning of the season if we would have told you we were going to the Elite Eight, everybody would laugh at us and look at us crazy,” McGusty said.