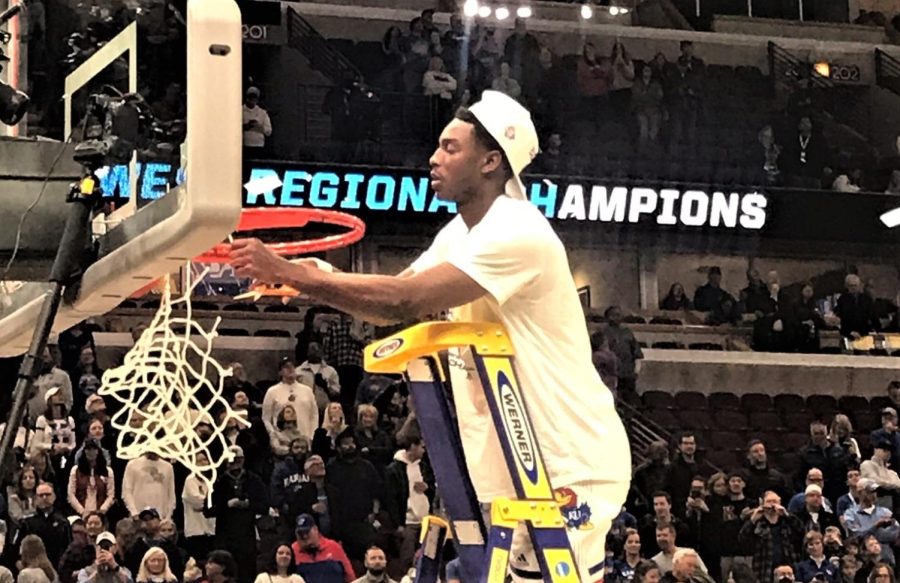 Kansas senior guard Jalen Coleman-Lands cuts down a piece of the net after defeating Miami in the Elite Eight at the United Center Sunday afternoon.

It all came together in the city where he spent two years of his college career in — Chicago. It happened in the stadium where he grew up dreaming to play in — the United Center. And it was the game that he always wanted to play in and win — the Elite Eight.

For Jalen Coleman-Lands, Sunday afternoon was his full circle moment. He and Kansas stormed past No. 10 Miami, 76-50, to book a ticket to next weekend’s Final Four in New Orleans.

Four different schools. Two long-term injuries. A bunch of wins, but a lot more losses. It was not a smooth road to get to this point, but Coleman-Lands finally had his crowning moment as a college basketball player.

“To be here, before my last location in New Orleans, this comes full circle,” Coleman-Lands told The DePaulia after Kansas’ win on Sunday. “For my family, my friends to be here and support me going to this last phase, it means a lot. It just puts everything in perspective.”

From Illinois to DePaul to Iowa State to Kansas, this has been seven years of Coleman-Lands trying to find the program that he could reach the mountaintop of college basketball with. He finally got there on Sunday.

Coleman-Lands had to adapt this season. He averaged his fewest minutes, points and rebounds per game since entering college. That was no problem for the super senior out of Indianapolis.

On Sunday, Coleman-Lands struggled to knock down shots against Miami. He missed several open looks and went 0-of-4 in the first half. Did he pout? Did he get visibly angry that his shots were not falling?

No, he did not. Because it’s not about him or one player on this Kansas team. Even Ochai Agbaji — a National Player of the Year candidate — has had bad shooting nights this season. It’s a collective effort.

“He’s [Coleman-Lands] been great, “Kansas head coach Bill Self said. “He’s working on his second master’s degree and hopefully will complete that. I don’t know if he can be done this spring, but soon after that. He’s extremely bright.”

When Kansas went on its 16-2 run early in the second half and then on a 10-0 run later in the half to blow open the game, Coleman-Lands was not on the floor. And, yet, he was still cheering, clapping and supporting his teammates from the bench.

During timeouts in the second half, Coleman-Lands was the first player off the bench to go and greet his teammates.

But Coleman-Lands did get one moment near the end of the game to bask in all the glory — he knocked down the game’s final 3-pointer, did his trademarked back pedal and began the celebrations with his teammates.

After the game had finished, Coleman-Lands stood with his family on the United Center court, taking in the entire moment. His mom, Dionne, was beaming with joy.

“He sacrificed a lot,” she said. “Even early on, in high school, he was removed from home, being away from home. A lot of things he was not able to be around his family [for] different events, different holidays, but he sacrificed that and we knew this is part of him and his passion.”

Long hours in the gym. Months of rehab trying to heal a broken leg before his freshman year at Illinois and then a broken hand at DePaul. It all becomes worth it when the final outcome is like the one on Sunday.

A Final Four now awaits Kansas. The opponent will be Villanova. If the Jayhawks can get past the Wildcats, then they will face either Duke or North Carolina in the national championship game.

How about that for a Final Four?

And Coleman-Lands gets to be apart of the entire ride.

He will also have his biggest fan in attendance next week, his mother.