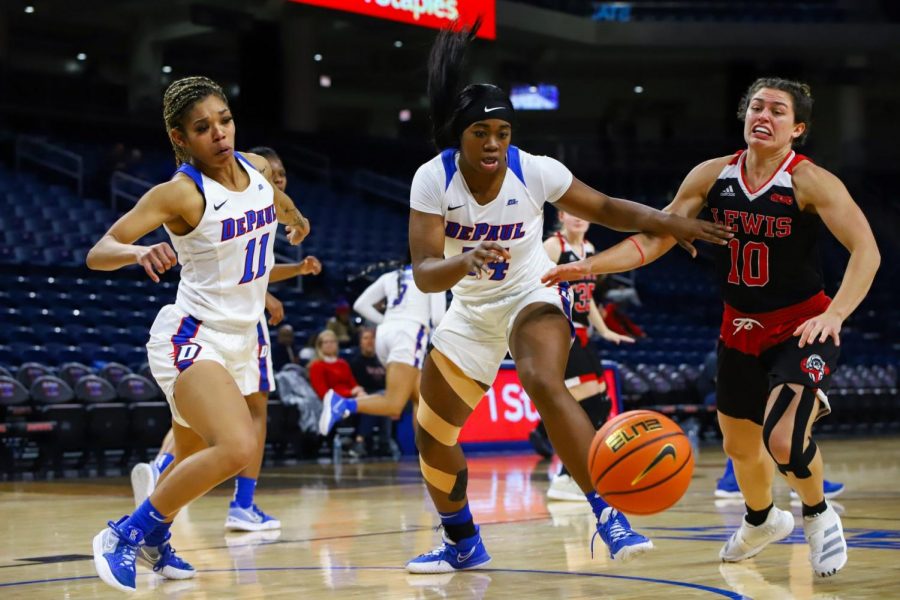 Freshman Aneesah Morrow chasing after a loose ball against Lewis.

It did not take long for DePaul head coach Doug Bruno and his coaching staff to see Aneesah Morrow’s potential and the impact she could have in her first year.

The power. The strength. The scoring ability. The ability to gobble up rebounds. The ability to block shots. Before a single game was played this season, it was clear to the coaching staff that Morrow could contribute right away.

“I am pleased to present the WBCA NCAA Division I Freshman of the Year award to Aneesah Morrow, ” WBCA Executive Director Danielle Donehew said. “Aneesah most certainly contributed to DePaul’s success, and we recognize and applaud her immediate impact this season.”

She is the first DePaul student-athlete ever to win multiple national freshman of the year awards.

Morrow put up unheralded numbers in her first season at DePaul. She averaged 21.9 points and 13.8 rebounds per game. She ended up breaking 11 Big East records by the end of the season.

Morrow became only the fifth player ever in NCAA history to record a double-double in at least 20 straight games in one season.

The 6-foot-1 forward also had a three-game stretch in January where she averaged 31.7 points and 14.7 rebounds per game, including a 30-point, 14-rebound performance against UConn.

“She is not the tallest post [player] but she would think so,” DePaul senior guard Sonya Morris said. “She is kind of the glue that we [have] been needing the past couple of years.”

Morrow did not take a long time to adjust to the college game. In her first game of the season, she scored 31 points and grabbed nine rebounds in only 23 minutes.

The numbers, however, only continued to improve throughout the season. Her best performance of the season, arguably, came against Creighton on Feb. 27 when she scored a career-high 41 points and grabbed 18 rebounds.

“I wanted to stay close to home, so that was one thing that made it easy for me,” Morrow said. “I wanted to be around consistency.”

With Morrow leading the charge, DePaul finished 22-11 overall and 14-6 in the Big East. The Blue Demons made it to the NCAA Tournament, but ended up getting blown out by Dayton, 88-57, in the First Four.

“We are thrilled for Aneesah,” Bruno said. “Everything she is receiving here as an award, she has earned.”

Even with the season that Morrow has had, Bruno still sees areas that she can improve on before next season. In particular, he wants to see the Chicago native become a better 3-point shooter and become a better handler of the basketball.

“Players are made between March and November,” he said. “And what I’m excited about with Aneesah — yes, we are excited about the awards — I’m excited that she’s going to go to work and help take her game to another level so that next year you are going to see a different Aneesah.”