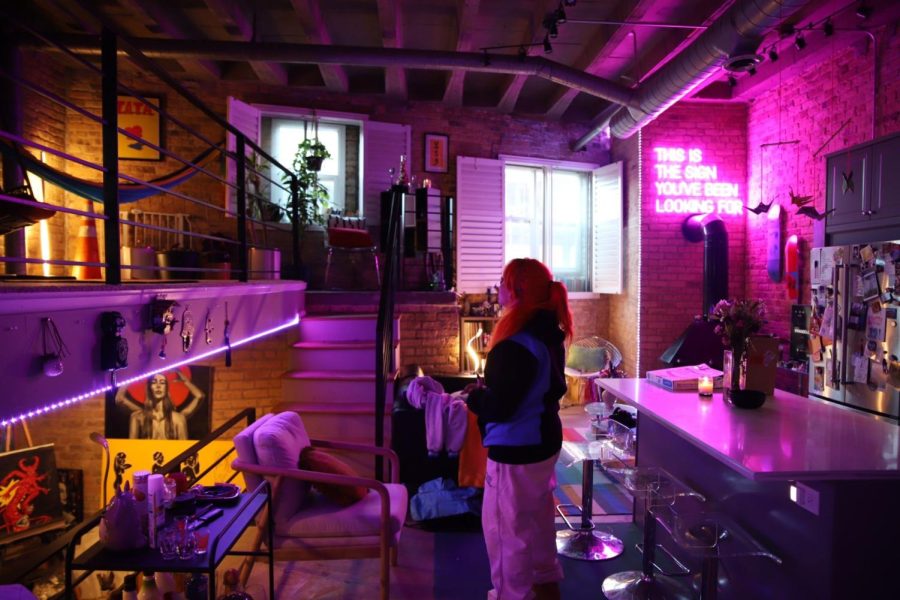 DePaul sophomore Jae Valdez looks around her loft as she points out all the decorations she's most proud of. In an artists paradise, Valdez's apartment is decked out with mostly original artwork, along with some of her favorite professional pieces.

The glow of neon lights and bright signs illuminate a loft apartment that could have been pulled straight out of iCarly. The walls are covered with Brassai portraits, album covers andt original works of art. It is within these walls that artist and DePaul sophomore Jae Valdez creates her work while building her business.

Valdez has owned and operated Freefall Skate Co. since she was a junior in high school, transforming it from a hobby to a thriving business with a bright future. Having worked in a skate shop in the Dallas-Fort Worth area since the age of 16, Valdez immediately made a connection from her artistic background — both parents were painters — and her newfound passion for skating. She began painting the decks of boards for friends and gradually grew obsessed with the new medium she’d discovered.  Eventually, she started Freefall as a skateboard and related apparel company with the help of her  friend Hailee Wolfgramm.

Though they’ve proven to be the most profitable medium, Valdez’s work is not limited to only skateboards. She can use just about anything to express her creativity. Whether it be watercolors, pastel, pen on paper, sculpting or more conceptual work, Valdez is open to trying.

Freefall apparel has appeared in numerous skating competitions throughout the United States and the world, with a signature Freefall smiley board being featured in a competition in Uruguay. Valdez’s creative energy, love for her craft and drive to succeed should serve to inspire any young person with big dreams to simply start creating.

“Anything I can possibly make, I’ll do,” Valdez said, having recently grown fond of conceptual art, which is art that challenges the typical definition of painting and sculpture. Valdez enjoys creating mobiles of tinted and stained glass that reflect light off of each other to produce a mural of light in whatever room it is hung in. One particular aspect of conceptual art that has attracted Valdez’s creative energy is the temporary nature of it all, as most of it gets damaged or destroyed after just a short while.

“If you get the chance to see it while it’s here, you’re lucky. If not, all you have is a photo of the piece, which is a new work of art entirely.”

As a full-time student on top of being a creative professional, it can sometimes be difficult to find a balance between classes and work. . Valdez has gotten to the point where inspiration is a non-factor, if she needs to create but isn’t particularly inspired by any one thing, nearly a decade’s worth of journal entries and artistic muscles that have been developing since she was a toddler help push her to create.

“She’s got notebooks laying around all over the apartment” said roommate and friend, who asked to be identified only by his first name, Christian. According to Christian, Valdez is, “always sketching or doodling, even if we’re just watching T.V.”

As a young creative, it can be discouraging when people aren’t willing to pay prices on par with the quality of work, but those around Valdez know that the passion for creating goes deeper than recognition of profit margins.

“If someone even shows interest, you can see her eyes light up,” Wolfgramm said.

After taking much of the last two years to focus on establishing herself in the Chicago area, Valdez is ready to look towards the future. She is currently in the midst of opening her own studio, which would double as an artists’ collective. Valdez enjoys the environment in her apartment, but she feels as though getting out of the house to go to work would drive her to work even harder.

Valdez wants to use her experience  to help other young artists  in the DePaul and Chicago community to achieve their dreams. “I was immediately inspired, and five years later she is still one of the great artists I look up to,” Samuel Canul said.

Her drive, passion, and pure skill are obvious to anyone that knows her well, but Valdez doesn’t get caught up in all the praise, she keeps her eyes set on the future, always looking for new opportunities to create art.

Valdez continues to curate an online presence to help bolster her profile. She can be found on Instagram @jaedenvaldez and @freefallskateco, as well as the official website for her business, www.freefallskateco.com.