Drag me to brunch: A journey in starting the art of drag 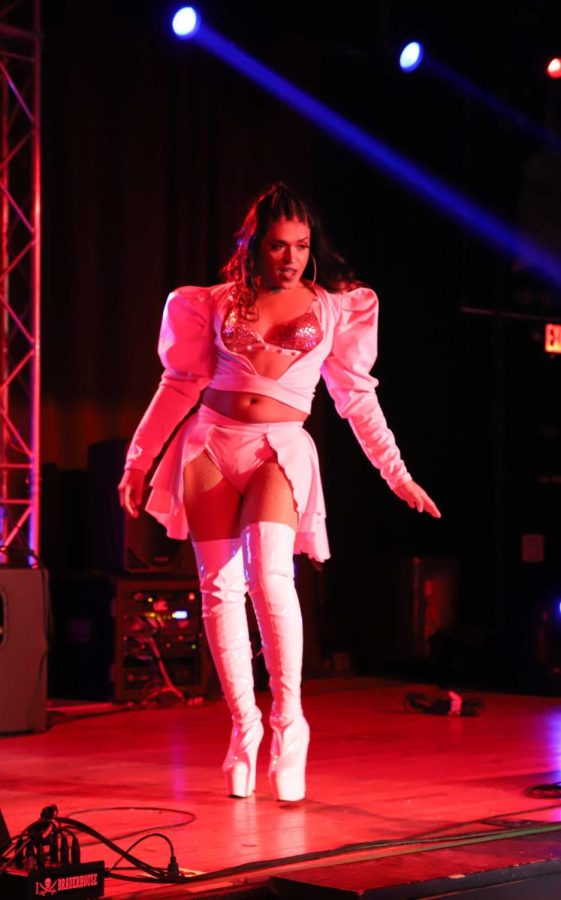 On Oct. 31, 2021, Aaron Lopez performed at his first drag show in Lombard, Illinois. Four months later, Flicky Fourloko is taking Chicago bars and brunches by storm. She’s new to the game and hungry for more.

“I’ve got the drag bug,” Lopez said. “I really fell in love with this dream and I can’t wait to see where it takes me.”

Though confident, Lopez is still figuring out how to navigate this new reality.

“I’m still not used to people calling me Flicky Fourloko when I’m in drag, I still respond to Aaron,” he said.

Growing up in Brooklyn with a supportive family, Lopez has never been one to shy away from who he truly is. He is a self-proclaimed “attention seeker” who has always loved shoes, makeup and fashion. His siblings agree with his assessment.

“I remember when we were younger and he would be walking around the house in my mom’s heels,” said Angel Lopez, Aaron’s older brother. “He’s always loved these kinds of things.”

As his brother sees it, Lopez has all the characteristics fit to be a successful drag performer. He has confidence, charisma, humor, incredible courage and a profound ability to take risks.

“He’s always shown the world exactly who he is,” Angel Lopez said. “I think [drag] is the perfect career for him.”

Though Lopez would eventually like to make drag his full-time career, in the meantime he’s absorbing all the tips, tricks and wisdom the Chicago drag scene has to offer.

“I was inspired by ‘RuPaul’s Drag Race’ to start doing drag, now I’m inspired by Chicago’s drag queens, by the community I’m now a part of,” Lopez said.

In the Chicagoland community, Lopez met queens who changed how serious he wanted to be about drag. One night, about a month before his first drag show, Lopez had a talk with his good friend and seasoned drag professional O’laysia. This conversation was different from the hundreds of others he’d had; it would make him get serious about drag.

“We really just talked about drag and how he just had to go for it,” O’laysia said. “You can’t be afraid to try.”

Though O’laysia is who pushed Lopez over the edge, it is his drag mom, Aleyna Couture, who helped Lopez book and prepare his first performance at Brauer House in Lombard.

In February 2022, Lopez was back at Brauer House to perform at a drag brunch alongside three other performers, including O’laysia. The event was hosted by Aleyna Couture.

“At the start, he was so worried about the padding, that it wouldn’t look right,” Couture said. “He didn’t trust that my nylon trick would work, and look at him now.”

The “nylon trick” requires Lopez to put on five to six nylon tights over his hip padding to smooth it out and to eventually make it look shapely. It’s a process that can take months.

“I didn’t think it would work, but it did,” Lopez said.

The more Lopez immerses himself in Chicago’s drag scene, the more he learns. At each venue, seasoned drag performers offer him all kinds of advice. From how to break in new material using their own tips and tricks, to sharing intel on the best venues to perform at (or not perform at), to sharing personal experiences and stories, it seems everyone in the community has something to offer to newcomers.

Although Lopez gladly absorbs everything he can, as a newcomer, he faces the challenge of finding a balance between tradition and the ever-evolving art form that is drag. He also faces the issue of preconceived notions of what drag performers are supposed to act and look like.

“I like ‘RuPaul’s Drag Race,’ but I feel like it’s ruined people’s perceptions of what they think drag is supposed to be,” Lopez said.

Contrary to popular belief, not all drag queens perform for crowds with flips, jumps and death drops as made famous by “RuPaul’s Drag Race.” For performers like Lopez, drag is about keeping up a persona and maintaining an illusion.

Fortunately for Lopez, he has a strong support system ready to help him figure it all out. From the queens offering advice, to his best friend who mixes his songs together, to his roommate who helps him perfect his eye shadow, Lopez has plenty of room to grow.

“I’m really still like a baby in this world, I still have a lot to learn about the kind of performer I want to be,” he said.