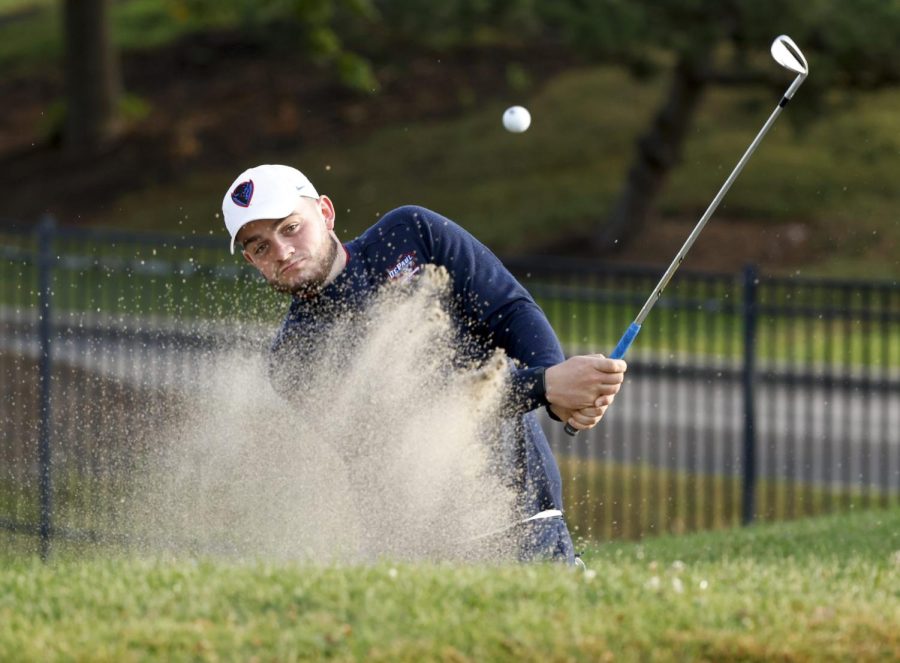 Connor Glennon hitting a shot out of a sand bunker.

Cultural diversity continues to grow at DePaul University and it’s leaving its mark on the Blue Demons men’s golf team, which is filled with individuals from across the globe.

Back in 2018 during the U.S. Junior Amateur Championship, head coach Marty Schiene had his eyes on 18-year-old Conor Glennon, who would soon join the DePaul family from thousands of miles across the Atlantic Ocean.

“On that particular day he was incredibly accurate,” Schiene said. “He’s a big fella and he hits it long.

Glennon comes from the village of Glasson in Westmeath, Ireland, just 78 miles east of Dublin, which is where he began his golf journey. Little did he know that by the age of 21, it would give him the chance to pursue a new life and an education, and he landed himself in a prime spot to do just that.

However, the transition to the U.S. wasn’t easy — especially in the midst of a pandemic, which made the adjustment to collegiate sports more challenging.

With dark black hair and a lightly shadowed beard, Glennon towers as one of the tallest on the team. With his broad stature and Irish brogue, he stands out from the minute he speaks. Glennon’s humble approach and calm demeanor have contributed to the respect he has gained on the team.

“Initially the first few months were sort of a struggle,” Glennon said. “Acclimating myself to playing college and just a different environment really than back home, so it took a while to adjust.”

Glennon isn’t alone when it comes to international players on the Blue Demons roster. Out of the nine rostered players for the 2021-2022 season, three other teammates have origins in the Philippines, Russia and Ireland.

“I like to have some diversity on the team,” Schiene said. “It’s a global game now, so we are lucky.”

Making a major transition, like Glennon did, can provide a new perspective for international players. They have to try to find their place, and coming to a large city like Chicago helps out.

Outside of competing and practicing, Glennon supports the other athletics at DePaul and takes what the community has to offer regularly. He’s also enjoyed attending Chicago Bulls and Cubs games.

“Oh, I love Chicago, the city is great,” Glennon said. “I’ve traveled a lot and it’s definitely one of my favorite cities, you know, it has a lot to offer with sports and entertainment.”

Glennon got a chance to take part in Chicago’s rendition of St. Patrick’s Day, and it was a surprise to him compared to what he has experienced back home.

“I’ve actually only been here for one St. Patrick’s because of Covid-19,” Glennon said. “Especially because being Irish, it’s sort of funny because it’s celebrated a lot more here than it is in Ireland. It’s a strange experience.”

Being a student athlete is time-consuming and is hard to navigate at times, but the team helps feed off another. Considering the roster’s limited size at nine, it has been easier to bond and develop a close relationship.

Fifth-year graduate student Nik Gatmaytan, who is from the Philippines, has had an opportunity to learn from Glennon and share each other’s perspectives having come from two different parts of the world.

Although Glennon is in the middle of the pack in terms of experience and age on the team, he has been good enough in the eyes of Schiene both off and on the course that he’s been named one of the team captains.

“He’s one of the vital guys on the team,” Gatmaytan said. “Conor being a team captain and all, everyone respects him.”

Glennon has enjoyed his golf experience so far at DePaul and was granted an extra year of eligibility to continue playing due to the pandemic. This means Glennon will remain a Blue Demon for the next two seasons.

Glennon knows the end goal is to play professional golf, but it is hard to tell where the next couple of years of his life will head. As a finance major, starting his own business is also a goal.

Having one of the better seasons since joining the Blue Demons, Glennon — along with other teammates — could be in the running to win some individual tournaments. However, their main focus is to keep winning as a team.

With the Big East Tournament approaching on April 25-27, Glennon has primarily had his focus on the team and making sure they qualify for the NCAA regionals.