Max Strus can’t be counted out 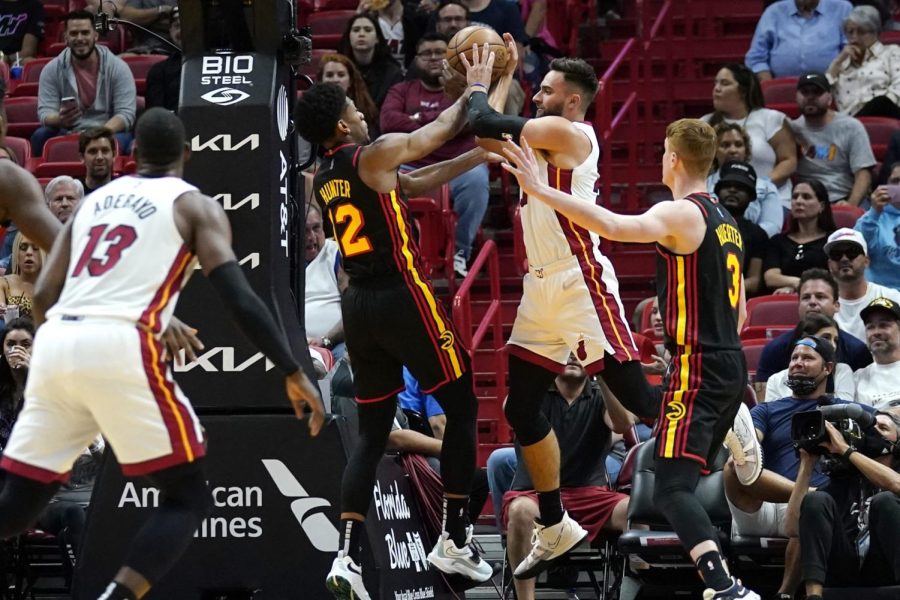 Uncertainty crept into Max Strus’ mind three years ago. He did not know if this was the end of the road for his basketball career. He just came into the league as an undrafted rookie out of DePaul University, looking for a chance to make a name for himself in the NBA. But not even two months into his professional career, the path to staying in the league became even harder.

It all happened pretty quickly.

In late December of 2019, the Chicago Bulls announced that Strus tore his ACL and would be out for 8-12 months. The injury occurred while he was playing a G League game for the Windy City Bulls.

As an undrafted rookie who was on a two-way contract, there was doubt that Strus would get another chance to play in the league. In his rookie season, he only appeared in two NBA games and spent most of his time with the Windy City Bulls.

“When I tore my ACL, I didn’t really know what was going to happen,” Strus said in an interview with The DePaulia. “At that time, I really hadn’t made a name for myself at the professional level and didn’t know if I was going to get another chance.”

As someone who didn’t have a chance yet to prove himself in the big leagues, Strus was concerned about the future of his professional basketball career. It’s one thing for a proven, veteran NBA player to come off a torn ACL and still expect a spot in the NBA, but it’s a whole other dimension for someone who just turned professional and did not have many expectations.

In the following months of his recovery, one thing kept him from giving up: his belief that he can make it in the NBA.

“I wouldn’t be here if I didn’t [believe],” he said. “It takes a different mindset to be here and stay here.”

He put in hours upon hours rehabbing his left knee to get it healthy enough so he can train again, then he spent months getting himself back in shape for the next opportunity to arrive and then the Miami Heat came calling.

In the fall of 2020, the Heat signed Strus to a training camp contract, and the Hickory Hills native popped right away. He scored 22 points, including hitting six 3-pointers, in a preseason game against the Toronto Raptors and the Heat immediately converted him to a two-way contract for the 2020-21 season.

“I’ve had the dark days, I’ve had the long days of rehab, not knowing if my basketball career is over, so it just makes me see everything in a bigger picture,” he said. “It makes me enjoy it more.”
‘I don’t need no m—-rf—-n’ help’
Strus has always been confident that he can compete at the highest level. Every player has to believe in themselves first before another organization decides to select them, but it’s different for Strus.

He was not highly recruited out of high school; in fact, he first went to Lewis University — a Division II school in Romeoville, Illinois — before transferring to DePaul for his final two years of college. But he always knew that if he just worked hard enough, something good would come to him.

Even when 60 names were called in the 2019 NBA Draft and not one team selected the former DePaul guard, he still had that inner belief that his work ethic will have those teams second guessing themselves.

“The confidence and the belief in my game of what I can do at this level,” Strus said.

Recently, that confidence was put to the test. In a road game a couple of weeks ago, Strus told the coaching staff that he did not want any help guarding a specific player from the opposing team.

With the time spent in the summer and during the regular season honing in on different defensive techniques with the help of Miami Heat assistant coach Anthony Carter, Strus was confident he could come up with big defensive stops.

Afterwards, Strus made sure to let the coaching staff know that he is that dude, and that he can be a versatile player. He proved he is not just a 3-point shooter, but he can also play some defense.

“He got those stops and came to the bench and let all of us know,” Carter said.

Last summer, the Heat and Strus agreed to a two-year contract after he stood out in the Summer League, averaging 20.8 points, 6.2 rebounds and 2.5 assists per game.

Throughout that summer, Strus worked closely with Carter every day to help him improve his scoring and playmaking abilities. Carter and the rest of the coaching staff would devise a game plan for Strus specifically on that given day — and he would come to the gym and do it and then do it again the following day and so on.

“It all start with [head coach Erik] Spoelstra and some of the other assistant coaches, because when we had [Strus] here in the summer this is what you need to work on and then [Spoelstra] gave me a game plan and said this is what Max needs to work on to get minutes during the regular season,” Carter said.

Strus is finally starting to reap the rewards of the hours he put in during the summer. He has scored in double figures in four of his last five games and is shooting above 60 percent from the field and from 3-point range in his last four games.

“I think a lot of that happened through Summer League this summer,” Strus said. “I think that was a huge part of my development and really something that took me to the next step.”
‘He never quit’
When Strus was considering which school to transfer to in 2017, he was down to three options: DePaul, Butler and Xavier.

When DePaul’s coaching staff got the chance to meet with Strus and his family during his recruitment, former Blue Demons assistant coach Rick Carter helped put together a presentation showing what he did well at Lewis and what DePaul runs in its offensive sets.

In that meeting, DePaul went through different parts of Strus’ game — especially on the offensive end — and how he can fit into the program.

“It was really funny because I thought it was going to be a 30-minute presentation, and we were like an hour and 55 minutes in and [former DePaul head coach] Dave [Leitao] was like, ‘we have to go to dinner,’” Rick Carter said. “But it was a great vibe. We just kept looking at every angle of our program and how he was going to be able to turn it around based on his skill set and how it really fit what we were trying to do.”

Strus eventually committed to DePaul and ended up finishing his Blue Demon career with over 1,000 points in only two seasons.

But it took just one practice for Rick Carter to notice that DePaul had a special player in its program. Strus showcased his ability to consistently knock down shots, come off pin downs and screens for open 3-pointers and even flashed his athleticism at times.

“He never quit,” Rick Carter said. “He has had so many opportunities to give in to bad chances, I don’t mean like he did something wrong, [but] knee injury here, knee injury there, all these things have been stacked up against him, and he has put his head down and rolled with the punches.”

It speaks volumes about Strus’ work ethic and desire to make it on the professional level. A lot of people aspire to be professional basketball players, but something that separates the professionals from the ones who never make it is that fire burning within to never give up.

And Strus is one example of that out of only 450 active NBA players.

DePaul has not won many games over the course of the last two decades, but it did record its first winning season in 12 years in 2018-19, with Strus averaging 20.1 points and 5.9 rebounds per game.

Strus is only one of two current DePaul players in the NBA alongside Paul Reed. So, when Strus or Reed do something well, the Blue Demons’ men’s basketball Twitter page will tweet it out to show support to their former stars.

“Obviously, a lot of things have changed since I left, but, even though it’s a new regime [and] it’s a new staff, I still feel support all the time, so it has been great,” Strus said. “And I want nothing but the best for DePaul.”
‘Everybody knows their role’
The Miami Heat have become known for taking underlooked players and developing them into either stars or very reliable role players. For example, Duncan Robinson was undrafted in 2018, but the Heat took a chance on him and he has become an effective 3-point shooter in the last few years.

In fact, of the eight players that have played at least 1,500 minutes for the top-seeded Heat, none were selected in the top 10 of the NBA Draft, according to ESPN’s Zach Lowe. Strus is one of them.

“Everybody knows their role, we don’t care who gets the fame, the shine, none of that,” Carter said. “We don’t have to brag, but the work speaks for itself.”

It comes down to player development and the player believing in the coaching staff and vice versa that both sides simply want the best for each other.

When a player wants to come to the gym early in the morning to get shots up, there is always at least one coach who is also there.

When a player has a bad shooting night and wants to find his rhythm right after the game, there is always a coach who stays and helps that individual.

And when someone walks into practice in a bad mood, someone — either a coach or player — will help to cheer them up.

“Once you get here, this is your sanctuary, this is where you are supposed to let everything out, get better, go hard and things like that,” Carter said.

Strus has benefited from that type of environment. It is also a big reason why the Heat are the No. 1 seed in the Eastern Conference heading into this year’s playoffs.

The journey has been bumpy for Strus, it has been filled with trials and tribulations over the course of his basketball career, but these are the moments that he has aspired to be a part of. Now, he is finally getting his opportunity in basketball’s greatest stage.