The story of a woman, for women, by a woman 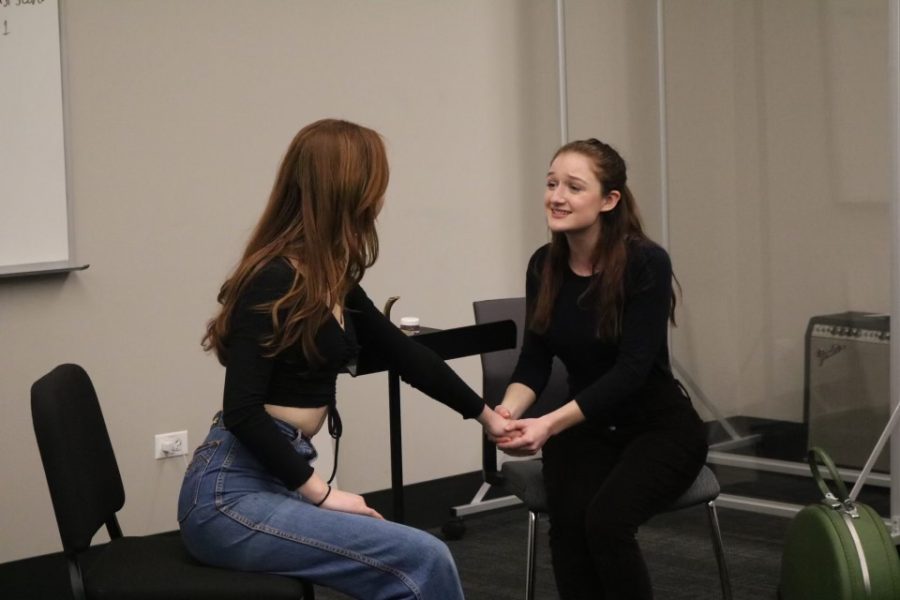 Sophomore Anna Maria D’Ortenzio looked at her phone, it was 3 a.m.

She threw her head back into her pillow, and pushed her Pride and Prejudice book off to the side. Staring at the ceiling, she thought about how much easier life would be if she was surrounded by Jane Austen’s world of biscuits and courtships rather than the overwhelming amounts of hand sanitizer and masks she has piling up.

Suddenly, an idea popped into her head. The Brink of Womanhood came alive that night.

From April 1 to April 3, The Brink of Womanhood musical played in the Athenaeum Center for Thought & Culture through Blue Demon Theatre, a student organization that helps fund students to show their original works. The musical is based in Norland, England in 1868. It focuses on the story of Elinor Dixon, a feisty and adventure-driven young woman who is looking to attend university instead of following the routine route of marriage. It also follows Elinor’s younger sister, Lydia Dixon, who is more marriage-focused and poised than Elinor and succeeds even with her traditional desires.

As the musical follows Elinor and Lydia as they find themselves, the pair become strong, empowered women in their own way, despite their polar opposite desires.

The musical is an original piece written and directed by D’Ortenzio and composed by herself and her co-composer Ayda Akbal, who lives in Australia. D’Ortenzio and Akbal have never met in real life, nor did they ever interact face-to-face or over the phone while this piece was in the works. D’Ortenzio said she met Akbal through an online female composers event.

Despite the challenges of creating a musical with a time and regional divide, the musical came together throughout the pandemic. D’Ortenzio said she felt like she needed to tell the story of Elinor and Lydia, not just to add another piece to her collection of published plays, but to share a story of female empowerment.

D’Ortenzio said when she was looking through works like Bridgerton, Jane Austen and Little Women, she noticed the plots tend to ignore the empowerment of women in feminine roles in society.

“We can tell the stories in this time period, while still uplifting women,” D’Ortenzio said. “While I was writing this, I was kind of discovering my own strength in my femininity. I wanted to write a character like Eleanor Dixon, like Lydia Dixon, to almost empower myself.”

Through creating the narrative that is The Brink of Womanhood, D’Ortenzio said the cast is what made her vision truly come to life. D’Ortenzio said sophomore Emma Gordon, who played as Elinor, and freshman Grace Provan, who played Lydia, were exactly the people she wanted to fulfill her carefully crafted characters.

“It’s so funny, because when you’re working on a new work like this, or really any show, the character is not how the character is in the final product at all,” Gordon said. “My original interpretation of the character was very different from how my Elinor ended up being.”

“Discovering [Lydia] was hard because when I first read the script, I was like, ‘Alright, there’s Elinor Dixon, the woman that everyone who comes and see the shows is going to want to be Elinor Dixon and you have to play her little sister who can be whiny and irritable and very bland sometimes,’” Provan said. “But then, actually getting to figure her out — Elinor’s witty, Lydia is clever. And Lydia has this magic that Elinor doesn’t necessarily have where [Lydia] has the ability to just bring calm to the situation. She is the main character in everyone else’s story. So I think, being able to discover this character that I initially wrote off as the boring ingenue and being able to find her strength and her power was incredible.”

Provan said she immediately created a sisterly bond between her character and Gordon’s. D’Ortenzio said they clicked instantaneously.

“Together they made sense in terms of sisterhood,” D’Ortenzio said. “Not only that, but they brought out what they represented, which is that bond and female relationships and like both of their characters had such great give and take. You can have two excellent amazing actresses who are so incredible, but if they aren’t on the same page, the connection is missing and then as a result the audience members don’t understand what we’re giving them so understanding the sisterhood helps push our story thematically.”

Throughout the musical, despite the bond of the two sisters and romantic relationships sparking for both siblings, D’Ortenzio said she didn’t want a song where a woman was singing about being in love with a man.

“I was reflecting on other musicals, every woman in every show I’ve been in has had at least one song about a man,” Provan said. “Neither one of us sang about a specific man. Our songs are very much like, this is who I am or this is who I want to be. And that’s props to Anna Maria.”

Another level of importance in the show was proving a woman can succeed and be happy in life whether she wants a more traditional path through marriage or by going to university and having a profession.

“It was very cool to play two women on the same side of the spectrum in terms of personality and wit but to play women with different desires and for them both to be okay,” Provan said. “With those desires, like Lydia does have the line ‘I’m not giving into marriage, I’m choosing it.’ And I think that’s also important to recognize that you can be powerful and amazing and super talented and smart and still want to have a stereotypical woman’s life. Wanting to get married and have kids and just settle down isn’t a bad thing.”

In the end, unlike Lydia choosing her destiny as a wife, Elinor is faced with various decisions, being either marriage with one of two men or choosing university, but the answer is not made to the audience.

“To speak to the ending, one thing that I think’s really fun about it is that is Elinor’s discovering,” Gordon said. “She basically spends hours planning out her future her whole life. And then she feels like a lot of the decisions in her life get made for her and she doesn’t necessarily have a lot of agency over them, which is the obstacle that she’s trying to combat. And then at the end, you see her have all these choices in front of her, all these different paths in front of her that she can take. And so even though it seems unresolved, that really is her breaking through and finding her freedom in this amazing array of choices.”

Through this story of female empowerment, D’Ortenzio said she is proud of the message she and her cast and crew are sending to the audience.

“I’m grateful for the experience to produce my work in a professional theater,” D’Ortenzio said. “I’m grateful to work with such an amazing cast. And I’m grateful to uplift women’s voices and I hope I continue to do that in my journey as a director and as a writer.”