The art of stealing: DePaul softball slides to near perfection in stolen bases this season 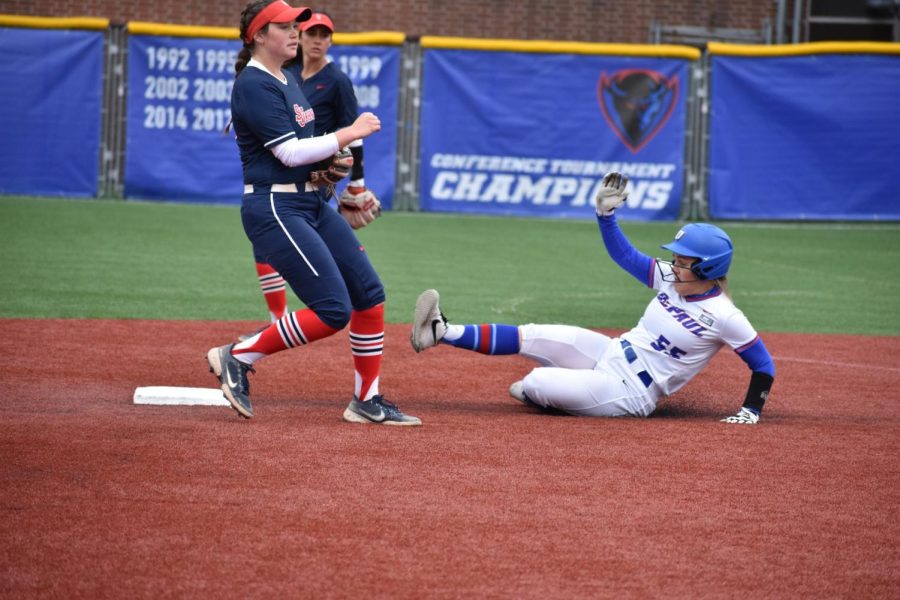 DePaul softball freshman infielder Baylee Cosgrove slides into second base in the Blue Demons' win over St. John's on April 15.

“It’s really fun,” Skylor Hilger, DePaul softball graduate second baseman, said about stealing bases. “My game is kind of [about] speed, so I kind of utilize it as much as I can, and in this game, every out, every base is so important, so to be able to just be gritty and take that base is really fun.”

The Blue Demons are 25 for 28 in stolen bases this season, and Hilger leads the team with nine out of 11 attempts. She uses her speed as a way to help her team by earning those extra bases, which puts her at a place where she only needs a single or double to score.

“I think [the stolen bases] are big,” head coach Tracie Adix-Zins said. “When you steal a base, it just keeps moving you up to scoring position, which means you only need a single now instead of hitting a double, or a triple or anything else.”

The bases around the infield are not the only bases that Hilger has stolen.

In the Blue Demons’ 7-1 win over Villanova on April 2, there was a pause in the action during which the Wildcats pitcher stepped off the mound for a breather. At the same time as a train entered the Fullerton L station next to the field, Hilger took off and slid into home plate.

“It’s kind of a new rule [that] when the pitcher steps out of the circle and they’re not paying attention, you can take a base,” Hilger said. “So in my head, I’m thinking, ‘Close game, everyone matters, and I know I have speed, so I’m going to take advantage of them when they’re sleeping.’”

Hilger, who is in her sixth year at DePaul, has seen and experienced a lot of things in her softball career and has stolen quite a few bases. She has stolen 18 bases in her time at DePaul, but she said that stealing home was one that will stand out.

“I was telling my dugout, ‘I came back for my sixth year, thank God, because now I can say I stole home,’” Hilger said. “It was super exciting, something I never thought I would ever experience, but you catch the defense sleeping and you take advantage.”

While the offense was in full display in the Blue Demons’ sweep over St. John’s last weekend, the third game was the closest in score, where DePaul trailed 6-1. In the game, junior right fielder Tori Meyer stole two bases, and sophomore center fielder Nicole Sullivan stole another.

The Blue Demons were able to come back and win the game, and the stolen bases by Meyer and Sullivan built the foundation for the comeback. When the players are on the bases, there is nothing they can do about the batting, but stealing bases gives them a way to tag up and get closer to helping the team add runs.

“It’s just one more thing that we can contribute to the win,” Sullivan said. “You take every little thing in softball, because everything matters, so stealing one base, for example — it matters.”

Sullivan’s stolen base against St. John’s was her first of the season, while Meyer’s two stolen bases now has her at a perfect five for five in stolen base attempts this season.

“Just like, going hard, pushing for that extra base,” Meyer said. “If the batter at the plate gets a base hit, then you’re scoring too, so then again, that’s helping them and in turn helping the whole team, so it’s just going hard and not holding up and doing what you need to do to get to that next base.”

In practice, the Blue Demons work on sliding into base with their runners, while pitchers and catchers try to perfect their timing in the feel of an in-game situation. The pitchers will throw pitches that the runners must respond to with perfect timing in order to take off and steal the base.

“We do a lot where our catchers are trying to throw us out at second, and we’re super aggressive on our lead offs, just making sure that we’re not late on the pitcher’s pitch,” Meyer said on the team’s practice methodology. “Our coaches are very diligent about making sure that we know if we are late, so that we know we need to be a little earlier to get that next base for our team.”

Stealing bases is a tricky maneuver, because if done incorrectly, it can lead to more outs that a team does not have to spare. However, if done right, a stolen base can be just what a team needs to earn that extra run and win a game.