Former Chicagoan takes a stand in the Ukrainian refugee crisis 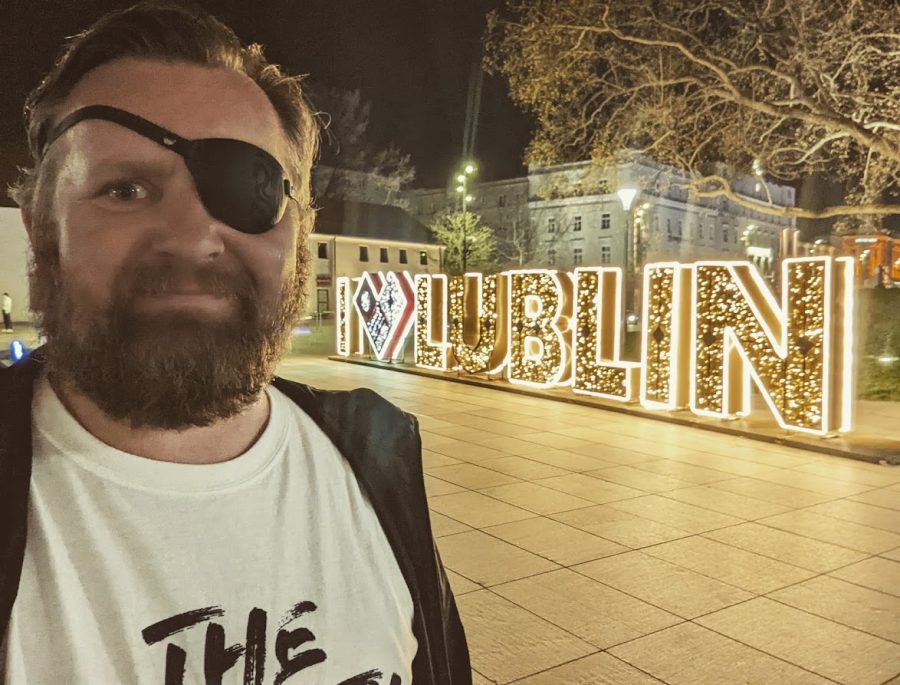 Michal Lorenc traveled to Poland in March to help refugees at the Ukrainian border.

For the past four weeks, Michal Lorenc woke up in a Lublin, Poland hotel after temporarily leaving his family, his co-owned soccer team and his job at Google behind in Ann Arbor, Michigan.

Lorenc, a former Chicagoan and Loyola alumnus put his normal life on hold when Russia invaded Ukraine on Feb. 24. After starting a GoFundMe raising over $80,000 for Ukrainian refugees, Lorenc traveled to the Poland-Ukraine border to volunteer.

On March 20, Lorenc traveled to Lublin, Poland, the city where he grew up, to assist refugees crossing the Ukrainian border. Lorenc said he knew he had to help, and couldn’t stand by watching people suffer while he had the means and opportunity to help.

“I just couldn’t fathom not doing anything, I needed to help,” Lorenc said. “I just had this need to do something other than yell at my TV from across the world.”

A freshman at DePaul University and long-term family friend of Lorenc, Carter Altruda said he believes what Lorenc is doing makes him a hero, because he is helping others without any gain for himself.

orenc said he set up base in a hotel in Lublin because he wanted to prioritize secondary border crossings, and spends most of his time in Dorohusk, Zosyn, Hrebenne and Chelm, which are towns that border Ukraine. Chelm also has a large refugee center and train station coming directly from Ukraine where he was able to volunteer at the humanitarian aid center.

“I wanted to be in-person, to be able to help welcome the thousands of refugees a day that are coming here,” he said.

Lorenc said he starts his day at a train station in Lublin to see what they need, which is typically water, juice, diapers and basic necessities. Then he travels to three out of the four refugee centers he volunteers at repeating the same routine. Then, at about 2 p.m. he comes back to Lublin to shop for clothing for the refugees.

In Lublin, Lorenc has been assisting an organization called Free Clothing, which offers free clothes to Ukrainian refugees servicing close to 1,000 people a day.

“Today, I ended up getting probably 250 spring dresses for the kids and they had this Wonder Woman women’s t-shirt, and all the refugee moms are Wonder Women so I bought literally the entire selection from the stores,” he said.

Lorenc said the refugee’s needs vary day-by-day because the weather and their situations are constantly changing. At first, one of the greatest needs was underwear and shoes because many Ukrainians first traveled the border with only one pair of winter boots and  the clothing on their backs.

Now, many cities in Poland have opened up free access to swimming pools for refugees now that the weather is warmer. As a result, swim suits are in high demand and Free Clothing volunteers — like Lorenc — are actively working to provide this need to refugees for free.

“[This] is amazing, but nobody brings a swimsuit when they have to fit their livelihood into one backpack so that’s something we organize and end up buying hundreds of swimsuits so [refugees] can get them for free,” he said.

He also helps out at the Help Ukraine Center which provides medical supplies to Ukrainians fighting in the war. Lorenc typically buys and donates supplies like bandages, first aid kits or thermal blankets.

“Earlier today, I dropped off another 250 first aid kits which they will send directly to the Ukrainian army in Kyiv and Eastern Ukraine,” he said.

Tom Anubliss, another volunteer, met Lorenc at the Help Ukraine Center. His role at the center consisted of sorting the supplies delivered by drivers like Lorenc.

“The time that we met, I had been there for three weeks volunteering at this point, and was getting a sense for what was good supplies and when he came in with the medical supplies, I was like this is really good stuff so straight away I was excited to meet him,” Anubliss said.

Lorenc said thousands of refugees are continuing to cross the border everyday with about 21,000 people crossing the border on Monday, April 11 which is considered a slow day. About 90 percent of Ukrainian refugees are women and children and more than 1.1 million children have arrived in Poland since the start of the war, according to United Children’s Fund (UNICEF). Additionally, Lorenc said the population in Warsaw increased by 15 percent within only three weeks so housing has become a major issue in Poland.

“Lots of people in Poland have opened up their homes and welcomed Ukrainian families,” he said. “The question is, how long can somebody stay like this?”

Lorenc said there isn’t an easy answer to the refugee crisis, but it is important to address the long-term needs of refugees and determine how to help them start rebuilding a life where they are able to fend for themselves.

“The challenge is, how do you balance the two, how do you prepare for the long term crisis and give them an opportunity to stay and be able to integrate, while at the same time, giving them a chance and a way to come back [to Ukraine] as quickly as possible,” he said.

When asked how he made the decision to put his life on hold to help Ukrainian refugees, Lorenc said what he is doing is simple and safe compared to what they have to go through.

“I can always go back to my old life, but for the millions of people that are experiencing war, and are literally fleeing their country, their home for their safety, they don’t have that luxury,” he said. “The life they had before is gone, even if they go back.”

In addition to supplying clothing, food, medical supplies and other necessities to Ukrainian refugees, Lorenc has also been considering how he can help the women and children meet not only their physical needs, but also emotional needs. To bring a smile to the children’s faces, Lorenc custom ordered 1,000 lollipops in Ukrainian colors.

“I think it’s so important to bring a human element to everything we do and get people to show them respect because they had lives that were not much different than [ours] four or five weeks ago, and now everything has changed,” Lorenc said.

Lorenc will be coming back to Michigan on April 21 and is already thinking about how he can continue to help Ukrainians once he gets back.

“I’m already thinking about what I can do when I get back,” he said.