“We’re Here to Serve”: Facility Operations and their leader have been “the glue that holds DePaul together” 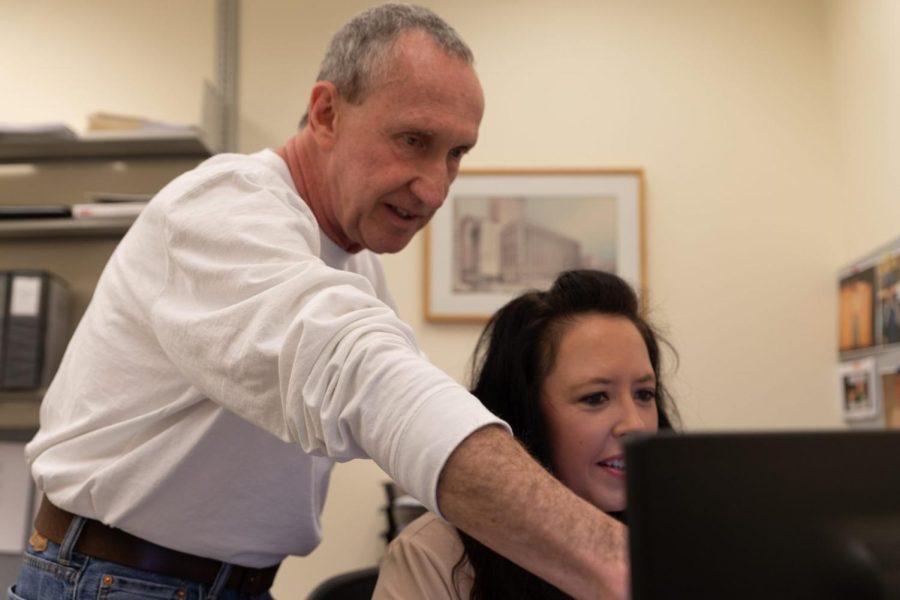 If you walked the streets of DePaul’s Lincoln Park Campus on the morning of Good Friday, the setting might feel off in comparison to its usual hustle and bustle. With no students gathered outside Arts and Letters Hall, no one sitting on the steps outside the Levan Center and no one entering and exiting the revolving doors of the Student Center, you might think the campus was empty.

While many students and faculty had vacated campus to enjoy a long Easter weekend, DePaul’s Facility Operations employees were hard at work.

“It’s an opportunity at moments like this when students and staff aren’t around that we can get in here to fine-tune things,” said Danny Cruz, the head custodian of the Schmitt Academic Center.

Cruz and his crew use days, like the Friday of a holiday weekend, to accomplish things they typically wouldn’t get to on a regular school day.

“We have thousands of students here, so there’s wear and tear,” Cruz said. “[Over a holiday] we can do things like paint and touch things up… there’s always so much to do.”

The details that Facility Operations maintains affect students more than many might realize, according to Kellen Brown, the executive vice president of DePaul’s Student Government Association.

“Even though you may not see it, these are the people that are making sure that everything goes efficiently and smoothly for all of our students,” Brown said.  “I’m blown away by the amount of work they juggle… [without getting] too overwhelmed.”

DePaul’s custodial crews, like Cruz’s, are just one piece of Facility Operations. The department manages numerous aspects of campus such as public safety, emergency management, parking and housing management and more. While DePaul has grown – both in physical size and student enrollment – over the past half century, one constant has partly witnessed and played a role in this growth and development: DePaul’s Vice President of Facility Operations Bob Janis.

On Oct. 31, Janis will retire from a 48-year career working at DePaul. As head of Facility Operations, Janis oversees a department that employs 173 full-time DePaul workers and nearly 200 contracted employees.

“Bob Janis, he sets the example,” Cruz said. “He commands authority… but in the same token, he’s really went to bat for me in many ways because that’s who Bob is as a person.”

While some of Janis’ employees currently see him as an esteemed and accomplished department head, that hasn’t always been his place at DePaul.

Janis first stepped foot on DePaul’s Lincoln Park Campus in 1974 to interview for a custodian job in the Vincentian residence to fill in for an injured employee. What was supposed to be a six-month stint at a temporary position, turned into a year and a half for the Chicago native. Afterwards, Janis was given a permanent custodial job.

“I was scrubbing bathrooms, cleaning toilets, and doing whatever else needed to be done,” Janis said.

Slowly but surely, Janis began to move up the ranks. After working in the Vincentian residence, Janis started working in the residence hall and later moved to work with the on-campus carpenter. From there, Janis was pulled into what was then called the physical plant office, where he began managing small construction and remodeling projects.

“I was blessed to have people in positions above me who were observing that I wanted to work hard… and I wanted to do more,” Janis said. “They gave me opportunities and gave me a chance to learn from them and grow with them.”

As he moved up the ranks as a DePaul employee, Janis also took steps to better his life through education.

While working as a custodian in McCabe Hall, Janis formed relationships with its residents, many of whom were MBA and law students.

“I interacted quite a bit with that group… I said [to myself] ‘I want to be more like these guys,'” Janis said. “I need to go to school; I need higher education in my life.”

Like his methodical rise through Facility Operations, Janis gradually made his way towards two degrees. Over the course of 11 years, he attended night classes and earned a bachelor’s degree from DePaul’s School of Continuing and Professional Studies in 1982 and a master’s degree in interdisciplinary studies from the College of Liberal Arts and Social Sciences in 1986.

“All while working here,” Janis said.

Facility Operations is at the forefront of physical planning of projects on campus, making decisions on what a new building’s layout should look like or the methods of renovation that should take place. Over the years, Janis has played a significant role in the physical assembly of DePaul University that current students like Brown are familiar with today.

“For me my favorite building is Arts and Letters,” Brown said. “He presided over the construction of that building, the Richardson Library, the music school… the list goes on and on… he’s the glue that holds DePaul together.”

For members of Facility Operations, continuity like Janis’ tenure of almost 50 years has been instrumental to the group’s long-term success.

“By my count, our… divisional leadership team has over 150 years of collective DePaul experience,” said Richard Wiltse, director of facility operations. “When the leadership team has worked together for so long, it… [makes for] a cohesive and effective team.”

Janis and Facility Operations have also had to navigate disasters at DePaul.

Wednesday marked the 30-year anniversary of the Chicago flood of 1992, an event that Facility Operations had their hands full with at DePaul’s Loop campus.

“There was 30-plus-feet of water in the lower levels of the Lewis Center Building,” Janis said. “All the primary mechanical equipment and electrical gear was underwater… We had to shut down everything.”

Facility Operations have been the primary force in managing recent crises too. The Covid-19 pandemic brought on many changes at DePaul, and crews had to roll with the punches. The team has done much to enable students to learn in a safe environment, from extensive cleaning practices to renovating workstations for increased safety protocols.

“During the pandemic, we took it to another level,” Cruz said. “[We’ve] been rocking and rolling every day to get this place clean… and to make sure kids can come in knowing that.”

If you ask Janis how he’s been able to accomplish so much at DePaul, he’ll tell you in his calm, yet commanding, voice that all of his success is due to those that surround him. Janis said the key is filling the department with talented workers from top to bottom.

“You have to make sure that you always have the right people in place to deal with all the moving parts,” Janis said. “[You need to] make sure you have properly trained individuals… that all touch some component of a very complicated and dynamic operation… Nothing moves forward without them.”

Although some DePaul students might not realize it, this cohesive team has a big part in students’ education. The department’s web page on DePaul’s website explains that Facility Operations is “a service department that provides for the effective operation and maintenance of DePaul University’s buildings and campus grounds.”

“I always hope that everybody understands… that everybody from the top to bottom [in Facility Operations] works really hard on behalf of the entire community here,” Janis said. “But first and foremost, especially for the students… We’re here to serve.”