Men’s Tennis goes back to back at Big East championship 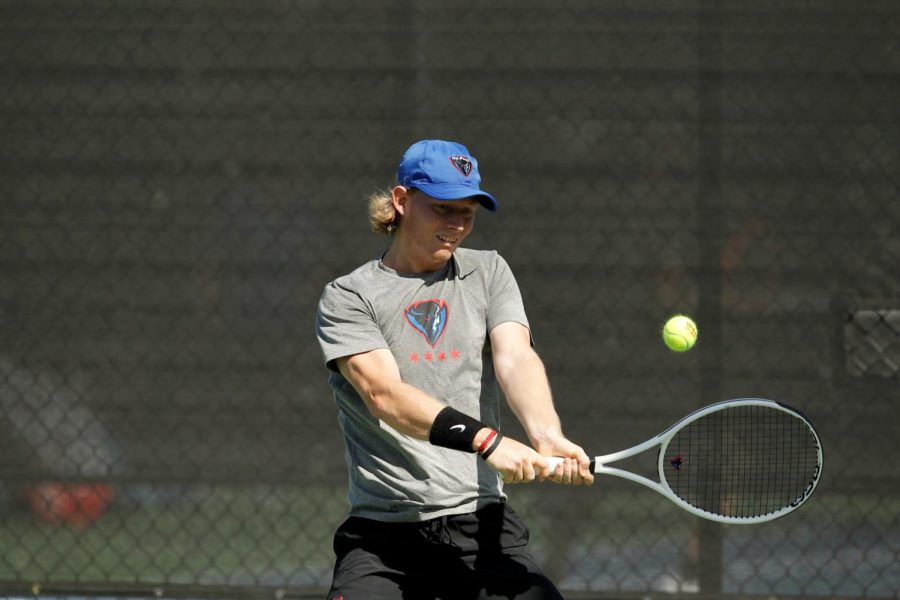 Tripp Tuff swings into a ball against Xavier on Saturday.

The DePaul men’s tennis team had an up and down season, finishing the regular season with an even .500 record at 12-12. But under the leadership of head coach Matt Brothers, the team has surged with an undefeated conference schedule that included winning their final three conference matches to seal their fate as back to back conference champions.

Their 4-2 victory against St. John’s gives DePaul a 8-0 record in conference play, with the title of 2022 champions attached to it.

Throughout the tournament, DePaul expected to have the No. 1 seed. When tournament time came, DePaul eventually came in as the No. 2 seed. St. John’s ended up taking the top seed, even though they only played two conference matches.

“I thought we were going to get the No. 1 seed because we were undefeated, but somehow, we didn’t get it,” junior Vito Tonejc said. “I don’t think that matters too much because we still have to win matches to win it again, and they’re all even teams.”

A lower seed than expected was not enough to stop the Blue Demons. They still prevailed in winning the conference tournament once again.

The key to winning the championship match was based on the team’s double’s performances.

“Doubles play is probably very important, most important in the Big East, especially because it makes the job much easier, so I think we’re going to put the emphasis on doubles,” Tonejc said.

The team started off strong in doubles play. Tonejc and freshman Marino Jakic lost their match, but junior Leon Huck/freshman Jona Gitschel (7-5) and graduate Tripp Tuff/graduate Luuk Wassenaar (6-2) picked up the team, solidifying their victories to give DePaul the early edge.

From that point on, DePaul took off in singles play. Wassenaar and Tuff lost their singles matches, but behind the leadership of Tonejc, the rest of the team stepped up and helped DePaul get over the hump. Tonejc won his match 6-4 and 6-1. Jakic won his match 7-6 and 6-3. Freshman Matteo Iaquinto assisted by completing his match with a 6-4 and 6-3 win. Huck did not finish his match.

This squad, nicknamed the Band of Brothers, has a history of success. The uniqueness of the team stems from the chemistry they have built overtime.

“It is unique that these guys get to go through four or five years together,” Brothers said. “It’s such a great group of guys. They are good guys off the court and are passionate about the sport.”

The Band of Brothers was formed a few seasons back when the core group of talent committed to joining Brothers’ movement. The meaning of that name stood for protection within the team as they prepared to battle together in every match.

“There was a big group of us that came in at the same year and our coach’s last name is Brothers, we all go to war together,” said Tuff, one of the original members of the Band of Brothers.

According to Tuff, building chemistry was important because in comparison to previous years, they have a bunch of young guys on this current team and have been working hard to become a strong unit together.

Over the last few years, players like Wassenaar, Tonejc and Tuff were the younger guys in the original core group. Now, they are the veteran leaders that bring the experience to guide the younger players to higher levels of success.

“Usually, the Band of Brothers was the older guys and four of them graduated last year, but I think [Wassenaar], Tripp, and me and [Peder Minsaas] are the core now of the Band of Brothers because we’re the oldest and then maybe a new nickname comes out for the new guys.”

Well, whatever nickname comes about, it will carry a plethora of weight for the young players.

They held down the fort in the final stretches to get DePaul back in position to taste victory once again.

When comparing last season’s team to this season, he admitted that the new dynamic helped develop the players for this moment.

“Two completely different teams,” Brothers said. “Last year was all the older, experienced guys who made it through the pandemic together and then took full advantage of their second chance. This year is a completely different dynamic — back to development and getting guys better.”

The elder statesmen of the group approved the talent the young core brought to the table, helping them finish their collegiate careers with a bang.

“It’s special because of how quickly the young guys became a part of our winning culture,” Wassenaar said. “They learned so quickly, and by the end of the season, they were playing like seniors.”

“The younger guys made some valuable contributions to this Big East title,” Tuff said. “We’ve officially welcomed them to the Band of Brothers.”