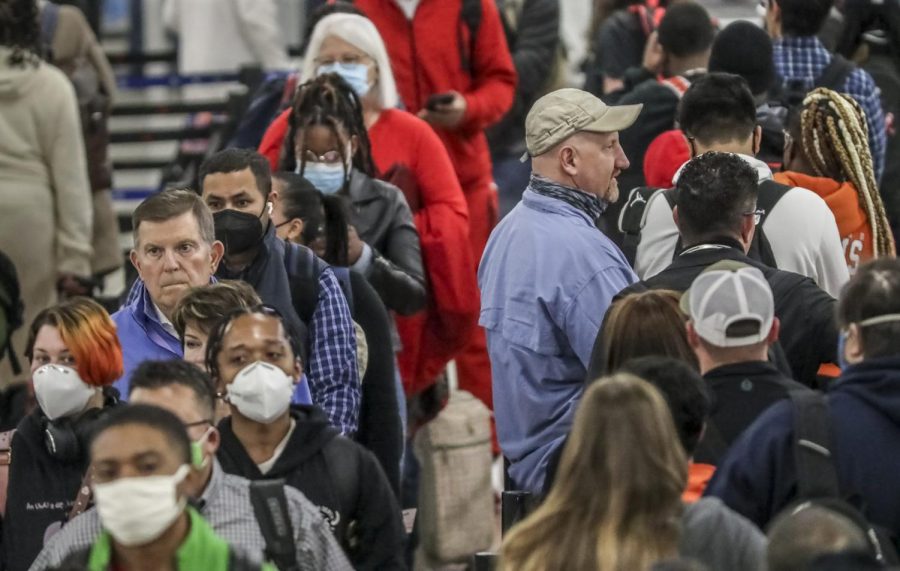 Crowds of the masked and the unmasked went through the security line at Hartsfield-Jackson International Airport on Tuesday, April 19, 2022 where the airport issued a statement Tuesday morning saying masks are now "optional for employees, passengers, and visitors" at the airport. "Although a mask mandate will no longer be enforced, employees, passengers, and visitors are reminded that masks continue to offer a level of protection against the COVID virus," the airport said. (John Spink/Atlanta Journal-Constitution via AP)

Across the U.S., passengers have expressed a mix of delight and alarm after a federal judge in Florida abruptly struck down the federal Covid-19 mask mandate for public transportation and airlines. The April 18 ruling states the Centers for Disease Control and Prevention failed to justify its decision and engaged in improper procedure when imposing the mandate.

Under the Public Health Service Act of 1944, the CDC is allowed to impose measures related to “inspection, fumigation, disinfection, sanitation, pest extermination [and] destruction of animals” in order to prevent the spread of disease. According to the ruling issued by U.S. District Judge Kathryn Kimball Mizelle, the CDC’s mask mandate does not sufficiently fall under any such category, and thus, enforcement of the mandate was deemed unconstitutional.

However, several legal scholars have since criticized Mizelle’s reasoning, arguing that she relied on excessively narrow interpretations of the law to justify her ruling.

Mizelle also ruled the CDC failed to provide sufficient reasoning for the mask mandate’s creation and enforcement, arguing that the mandate is “arbitrary and capricious” as a result. Again, a number of legal experts have criticized this reasoning.

“Since there was so much information out already at the time that this was promulgated, you would expect the government would probably not put quite as much verbiage into the statement that it makes imposing the mandate,” said Mark Weber, a law professor at DePaul.

The Justice Department said Wednesday it would appeal Mizelle’s decision following a CDC statement arguing that the federal mandate “remains necessary for the public health.” The U.S. Court of Appeals for the 11th Circuit will hear the case, and the case could also end up before the Supreme Court — both of which lean conservative.

Whether the courts side with Mizelle or the Justice Department won’t only impact the CDC’s Covid-19 mask mandate, though — the decision could permanently decrease the CDC’s authority to act against the spread of disease.

“The statute specifies certain things that the CDC can do with regard to the control of communicable disease, and [the argument is] it’s going far beyond what it should be able to do,” Weinmeyer said. “And so, the real concern going forward is that, should the 11th Circuit side in the reasoning of Judge Mizelle, that’s a real strike against the CDC — limiting its authority, limiting its power to act in these types of emergencies. And that presents a real challenge, not only for this pandemic, but for future pandemics going forward.”

Across the country, the sudden shift in policy has perplexed a number of Americans — many of whom had already found it difficult to keep track of local, state and federal policy changes throughout the pandemic.

“It’s very confusing for people — I’m confused myself,” said Josh Hoffpauir, 21, a student at Drexel University in Philadelphia. “A lot of workers in grocery stores, restaurants or drug stores aren’t wearing masks. A lot of the patrons aren’t, either. So it’s hard when you’re seeing all these different examples of how to live in the pandemic era, especially in Philadelphia.”

On April 18, Philadelphia became the first major U.S. city to reinstate its mask mandate for public indoor spaces, following a rise in Covid-19 cases within the city. However, as Mizelle’s ruling on the CDC’s mandate for public transit came only hours later, many Philadelphians were left puzzled about where they could and couldn’t go maskless.

On Thursday — just four days after the indoor mask mandate went into effect — Philadelphia’s Board of Health voted to rescind the mandate once again. Mayor Jim Kenney acknowledged Friday that the decision by SEPTA — the city’s public transit authority — to make masks optional in line with Mizelle’s decision made it difficult to enforce the city’s mandate.

In Chicago, both the CTA and Metra announced Tuesday that riders would no longer be required to wear masks. Later that day, the Chicago Department of Aviation announced an end to masking requirements at O’Hare and Midway airports.

While most cities have dropped masking requirements, not all transportation administrations have followed suit. In New York City, masks continue to be required on MTA public transport, as well as in John F. Kennedy International Airport and LaGuardia Airport before and after boarding a flight. In Los Angeles County as well , riders must wear masks on public transport and when inside Los Angeles International Airport and Hollywood Burbank Airport.

Even in places where masks are legally required though, a policy is only as effective as its ability to be enforced.

“We’re relying on the public to comply with these types of issues,” Weinmeyer said. “A big concern even at the start of the pandemic was, how are small businesses — even big businesses — really going to enforce these types of policies? Because that responsibility has been placed on them. And we see this in actions taken on flight attendants or people getting into fights in stores about wearing masks and things like that.”

Still, Weinmeyer adds that the amount of people he’s seen wearing masks even after mandates were dropped is encouraging.

“There’s going to be people who aren’t wearing masks,” he said. “There’s only so much you can do. Public health isn’t about 100 percent compliance, it’s about trying to get the most people to participate — to get vaccinated, to get them to wear a mask, to practice social distancing — to reduce the spread of disease. Nothing is going to be 100 percent perfect, but we’re trying to really do the best job we can, and I’m heartened that I go to the story and I still see a lot of people wearing masks. Every little bit helps with these types of situations.”