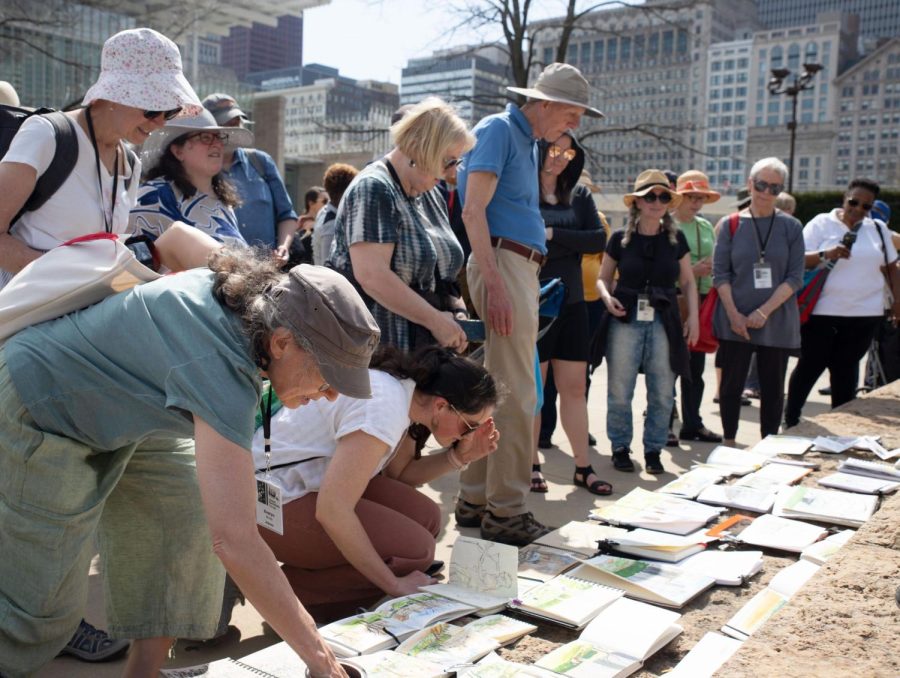 The urban sketchers gather to admire each other's work at the end of their meeting in their "throwdown" of more than 30 sketchbooks.

On Saturday afternoon on April 23, during one of the only warm days of this year’s spring, the Chicago Urban Sketchers gathered in Millennium Park’s Lurie Garden to draw together for the first time in months.

As the more than 30 sketchers arrived in the park, they passed around homemade macaroon cookies in celebration. Besides being the first day back as a large group this year, it was the Chicago group’s 10th anniversary.

Urban sketching is the practice of drawing the scene around you, on-location and in real-time. A global urban sketching community was started in 2007 by Gabriel Campanario, a news illustrator in Seattle who created an online forum for people to share their sketches. Today, there are more than 300 in-person chapters in cities all over the world.

The Chicago chapter is the second largest in North America, and although it began with just four members back in 2012, today there are 1,700 members in the group’s official Facebook group.

“[The size] was never the goal,” Alex Zonis, the founder of the Chicago chapter, said. “The goal was the spirit and drawing together.

“It took a while, probably two to three years to get the substance of it,” Zonis continued. “But once we became like 300 as a group, it began to have a gravity of its own.”

Since last fall, the group’s monthly meetups had been put on pause, avoiding meeting inside to protect everyone’s health during the Covid-19 pandemic. During the height of the pandemic,  sketchers would follow online prompts on their own and share their work in the Facebook group. Recently smaller groups of twos or threes had been meeting in cafes or local hangouts to continue to sketch. But now that spring is here, the sketchers are back outdoors and back to their full capacity.

“Drawing in little cafes and parks on one’s own without [the large group meetings] is hard,” Zonis said. “This is the drive, this is the engine.”

Sandwiched by rain on Friday and Sunday, the weather seemed to have saved this Saturday as one of the nicest days of this year’s Chicago spring for the sketchers’ reunion.

The sketchers quickly began to spread out around the park, choosing a spot to set up their folding chairs and travel-sized watercolors. The Lurie Gardens’ scenery provided lots of artistic inspiration, where the artists could choose to draw either the city skyline or the newly bloomed flowers.

“I wish more people would sketch,” Barbara Weeks said as she sketched the flowers in front of the Art Institute, sitting in a red folding chair in the center of the garden.

Weeks has been sketching all her life and has practiced urban sketching since the community’s beginning online in 2007. She introduced Zonis to the concept and helped her in founding the Chicago group.

“It’s not a matter of how good you are, it’s a matter of observing,” Weeks said. “Because what you see when you sketch is incredible.”

Although the group is filled with talented professional artists, graphic designers and architects, one of the group’s key points is that it’s open to everyone.

Chuck Stull works as an economics professor at Kalamazoo College and drove down to Chicago to see the city views and the sketching community. Although he had little background in drawing or painting, he picked up urban sketching about six years ago while on sabbatical visiting England and Spain.

“It was fun because it didn’t matter if you were good,” he said, using watercolors to paint the city skyline. “You didn’t have to be good at all, [and] it was free. Some people were working with just a piece of paper and a pencil and other people had whole big art kits with easels.”

If there’s one quality that defines the urban sketchers, it’s that they’re incredibly welcoming. Newcomers have easily found friendship in the group, whether they’re college students or retired.

“It’s a great community and it’s one that anyone can participate in,” Stull said.

They even encouraged me to try my hand at sketching. One member, Peggy Condon, even gifted me a viewfinder and shared her watercolor palette with me. She gave me tips to not focus on perfectionism, but on simply capturing the moment.

This summer will also see the return of the Chicago chapter’s annual sketch seminar, a weekend full of drawing and art workshops.

The global urban sketching group organizes a yearly symposium hosted by a different city every year, where sketchers from all over the world gather to meet and draw together. The Chicago chapter has become large enough that they’ve begun to host annual seminars of their own since 2014.

But while the international events can double as pricey vacations, Zonis said their Chicago seminars are priced as low as possible, with ticket sales simply covering the cost of the event.

“My goal at the end of the event is to come up with zero profit,” Zonis said.

The group brings in local artists to teach classes on sidewalks and in parks, and hosts other events like sketch walks. After being canceled for the past two years, the seminar will take place July 9-10.

After almost three hours of drawing, the artists reconvened as a group for what they call the “throwdown,” where they all put their sketchbooks together on the ground to display their completed works side-by-side.

The artists were barely noticeable when all spread out, quietly blending in with the garden. So when they all gathered together after sneaking away to sketch, it was a cacophony of sketchbook pages, with no two illustrations alike.

After admiring everyone’s drawings, the nearly three dozen sketchers held up their artwork and posed for a group picture.

“It’s beautiful to see what the group has become,” Zonis said. “I’m so proud of it.”