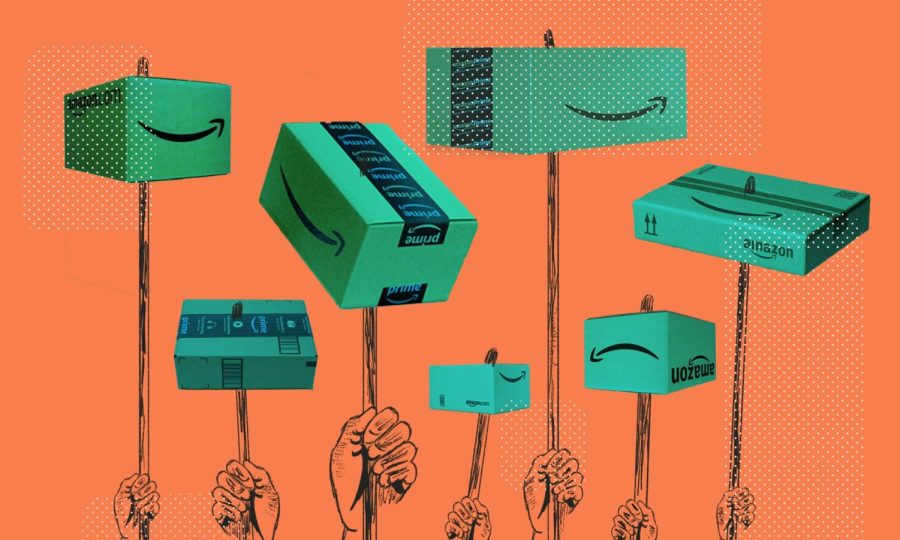 In the yearlong battle between Amazon and its employees, the employees have finally won. A labor union group at an Amazon warehouse in Staten Island, New York, made history on April 1 when enough workers voted to form a union for the first time in company history.

The historical union was organized entirely by the Amazon Labor Union (ALU), a group of current and former Amazon employees at warehouse JFK8. The group, led by founder Christian Smalls, focuses on better conditions, pay, job security and having a say as employees in the company, according to the ALU’s website.

In the end, 2,654 employees voted in favor of unionization, while 2,131 voted against, according to NPR.

Smalls was fired from Amazon in 2020 on the claims that he broke quarantine rules by attending a walkout he had coordinated. Following his firing, Smalls and Derrick Palmer, his friend and colleague at Amazon, decided to unionize. Together, they grew the group, from spreading information on TikTok to setting up food tables at the bus stop near the warehouse, according to the New York Times.

Helen LaVan, a management and entrepreneurship professor at DePaul, was not shocked to hear that workers successfully unionized in New York because of the state’s positive stance on unions. However, she was impressed with the efforts of the union at a company like Amazon.

Former Amazon employee Max Meredith worked at a warehouse in Kenosha, Wisconsin, for about two to three months in 2019-20. His job was to scan packages in the warehouse, and he had to make sure that he scanned enough packages per hour or else he would have been fired.

“I was told by many higher-ups that the best way to do things was to enter ‘robot mode,’” Meredith said. “Just to be soulless and move at the rate they wanted.”

Along with employees constantly being tracked as they work, workers have limited bathroom breaks that are also tracked and working conditions that are dangerous, according to Fortune. In 2020, 5.9 Amazon warehouse workers out of every 100 suffered serious injuries forcing them to adjust or miss work, according to a study done by the Strategic Organizing Center.

At JFK8, Amazon employees were told they had unpaid time off, but were then forced to work mandatory overtime, which resulted in a spread of the pandemic. Additionally, the company’s lack of communication left their employees struggling, which encouraged Smalls and Palmer to speak up and later promote their union, according to The New York Times.

When a union gets the votes of approval, the union then has the opportunity to negotiate with the employer on terms of employment and create a collective bargaining agreement. Many unions join a larger union affiliation or federation, which can provide funding and power to go up against large corporate employers.

Employees at an Amazon warehouse in Bessemer, Alabama, have been trying to vote on a union for the past year with the help of the Retail, Wholesale and Department Store Union (RWDSU), a larger union that has existed for nearly a century. However, even with the help of the RWDSU, the election for unionization has been a long process of rejections and challenges by each side, according to CNBC.

The ALU chose to remain independent. That allowed them to make their own decisions and connect with the workers who could connect with Smalls and Palmer because of their shared experiences. While the group may not have the funding from a larger union, their GoFundMe has raised over $315,500 dollars and counting.

“I think that a big factor is that, as I understand the situation, the union is independent and not affiliated with any mainstream union, a factor I understand might have accounted for their success,” said Robert Perkovich, clinical management and entrepreneurship professor at DePaul. “Thus, Amazon has much, much more power and resources should the parties begin collective negotiations.”

A win for the ALU may spark other Amazon workers and locations to speak out against the company. One started but has not found the same success. At an Amazon facility in Bayonne, New Jersey, Local 713 of the International Brotherhood of Trade Unions had planned to represent the workers there, but withdrew their proposal with no reason given, according to the New York Post.

Smalls and Palmer have no plans to stop with this one victory. Amazon employees at a Staten Island sorting center, LDJ5, will be able to vote to become a part of the ALU on Monday, Tuesday and Wednesday, according to the ALU’s website.

With a company as large as Amazon, employees may be overlooked in the rush to meet production rates. However, the goal of the union in Staten Island is to bring attention to those employees and provide them with a voice.

“I think the Amazon union is absolutely amazing and I’m hoping that it’ll force the company to go beyond absolute bare minimum care for their employees,” Meredith said. “Further, I hope it’ll make the company realize that people are not a replaceable resource.”