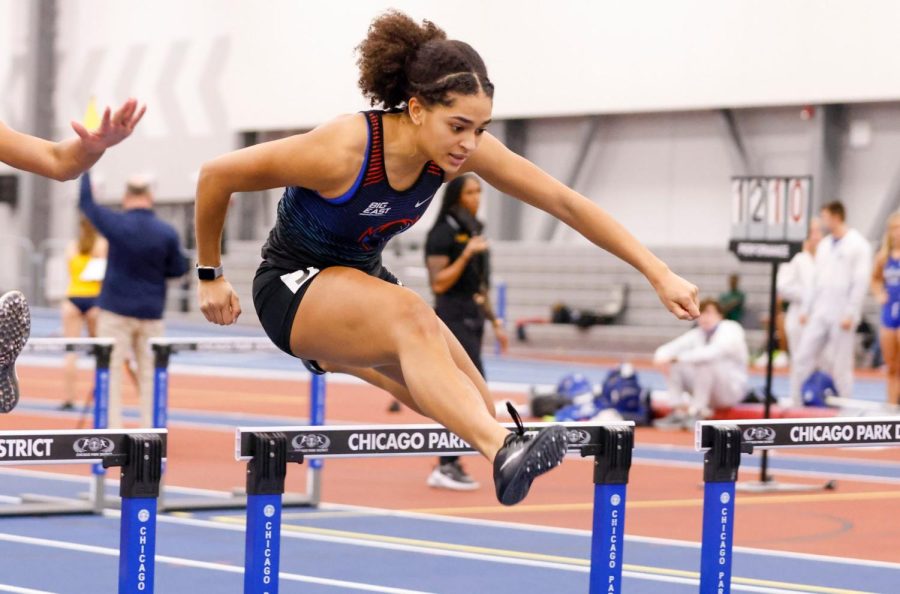 It takes an audacious athlete to conquer hurdles. Hurdlers clear nearly three foot high barriers, rain or shine, and change their strategy by the distance. It has to be more than speed, grit and technical ability that gets an athlete to run full-speed through hurdles.

“I saw people jumping hurdles, so you know, I decided to jump a hurdle,” freshman Darius Brown said.

Brown is a first-year athlete on the DePaul Track and Field team and is already a top performer in the men’s 110-meter hurdles. He took on the hurdles by chance after a hamstring injury in middle school.

“I had a really good coach in high school and she actually got me into hurdles. It took off from there,” Brown said.

The rising hurdler placed first in the 110 hurdles with a time of 14.05 seconds at the Gibson Invitational two weeks ago. The event consists of 10 hurdles standing at 42 inches placed 9.14 meters apart, much different than the indoor 60-meter hurdle event with only five hurdles.

Brown also runs in the 400-meter hurdles which require an entirely different approach. Yet, his success is a testament to the athletic ability he has cultivated over the years.

“It changes a lot because for…400 hurdles, you’ve got to go full out every time,” Brown said “There’s a certain amount of steps and a certain way you’ve got to run the race. You can’t just jog up to the hurdle and jump over it in practice — that’s not how it works.”

Hurdlers train differently once the outdoor season starts in spring. Rhythm work is a crucial component in their training that allows the athletes to work on their technique and establish a consistent stride for the race. Athletes practice with four to five hurdles during the indoor season but inevitably transition to more during their practices for the outdoor season.

While hurdlers benefit from a stable mind, their race is anything but steady. They are constantly seeking a lower center of gravity to accelerate. To achieve this, a hurdler leans into the first leg that clears the barrier. The lead leg is the first leg that goes over the hurdle and the trail leg follows. When an athlete finds their rhythm, they alternate legs and create momentum after clearing each barrier.

“I think a lot of it is the foundational sprint mechanics, training, just being in shape, and I think because I’ve hurdled you know, eight years now, my form is my form and it’s pretty well put together,” senior Isabel Ingram said.

The 33 inch high barriers did not deter Ingram from competing at a collegiate level for the past four years. She faced unique challenges during her sophomore and junior years due to Covid but has experienced a newfound peace with her racing as a senior.

“I came in with a lot of anxiety as a freshman and I had to change my whole way of thinking about the sport,” Ingram said. “I had to find what was fun again and find my joy in order to balance the stress and the pressures of winning. I think I finally got to that this year, so it took me a while, but I think that’s just part of the process and part of growing.”.

Ingram runs in the women’s 100-meter hurdles and the 400 hurdles. The consistent hurdler won the 100 hurdles back-to-back at the Gibson Invitational and Louisville Invitational last year. She anticipates success for the team as a whole due to the grit that characterizes their approach.

“I want to say I’ve never seen us so invested and, as a whole, just the grit that everyone has,” Ingram said. “They are very serious about it, they are really excited to win, and they’re locked in for sure.”

While acknowledging the intense training, Brown and Ingram prefer the outdoor track season to the indoor season. The five extra hurdles in the 100 hurdles, 110 hurdles and 400 hurdles give the athletes a chance to make up for slow starts and get up to their top speed. The only challenge is the unpredictable weather hurdlers when competing outdoors.

“I would say that’s the major difference between indoor and outdoor, just dealing with the elements,” assistant coach Stephanie Williams said. “It’s the same for everyone so it’s not like it’s just windy and raining in your lane, but it can definitely be a challenge.”

The 2021-2022 track season marks Williams’ 11th season as the assistant coach for the DePaul Track and Field Program. As a former student-athlete from DePaul, she understands the unique challenges athletes face each season and does what she can to support her athletes.

“I want to be the coach I needed when I was a student-athlete,” Williams said. “So, I’m really big on those relationships and pushing them, you know, still having fun but we’re also going to handle business when it’s time and they know that. When the switch is flipped, we’re not playing around and I need you to handle your business.”

As a hurdling veteran, Ingram isn’t unfamiliar with handling her business or enduring change. Yet, one part of her track and field career that remains nearly unscathed is her pre-race ritual.

“The night before I always make tea — peppermint tea — and I wear the same warmup, old ratty leggings and sweatshirt because that’s just what I’ve worn and what I feel comfortable in,” Ingram said. “I’ve [also] developed this really obnoxious grand opening thing at my start looking side-to-side and doing some rainbow kicks, but then I’m ready to race.”

Brown and Ingram will prepare for the Big East Outdoor Championships the next two weeks before heading to Connecticut the second weekend of May. Like the rest of the track and field team, both athletes hope to put up solid races.

“I just got to work a little harder and it’s right there,” Brown said. “It’s just mechanics, I got to prop my nose up a little bit more in between the hurdles, and I should be able to get there.”