Men’s tennis strikes date with No. 8 Kentucky in NCAA Tournament 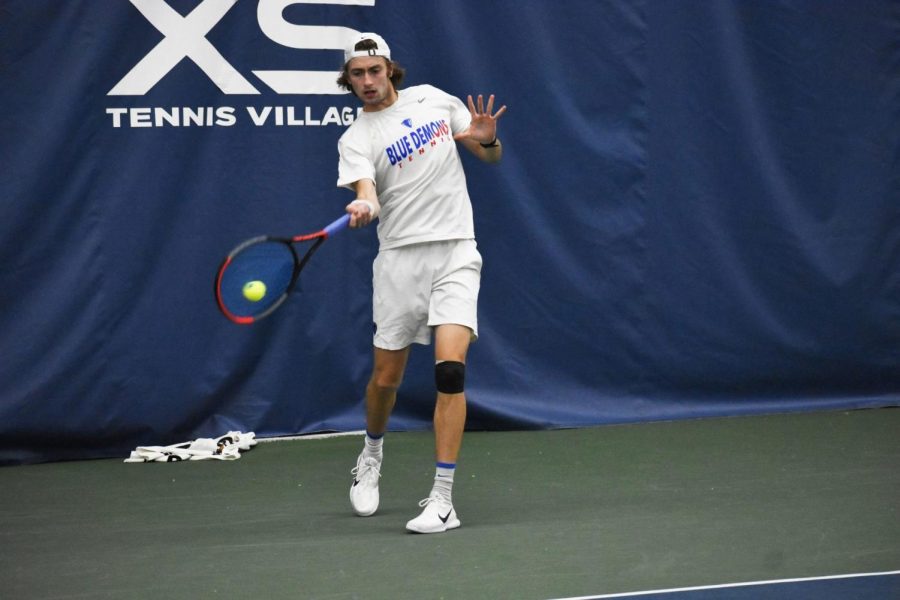 Vito Tonejc, DePaul tennis junior, swings into the ball in a win over Butler on April 11.

The DePaul’s men’s tennis team continues its journey later this week, striking a date with No. 8 Kentucky in Lexington on Friday for their first round opponent in the NCAA Tournament. This will be their first match since punching their ticket to the dance by winning the conference championship, providing another opportunity for revenge against the best of the best.

“The guys were excited to see their name pop up,” head coach Matt Brothers said after watching the selection show Monday. “I thought Kentucky was going to be a possibility. It is going to be great.”

Coming from the Southeastern Conference (SEC), Kentucky has played more top-ranked opponents than DePaul due to their strong conference. Brothers admits that Kentucky is a deep team and playing against top-tier competition consistently helps improve their team over time.

Earlier in the season, DePaul played ranked schools such as Florida Atlantic, Wisconsin and Notre Dame. The Blue Demons came up short in all three matches, and Brothers wished they could have played more ranked opponents, but he believes those experiences propelled them for moments like this.

“I think these guys take a lot of value from the close losses we’ve had versus a win against a conference opponent,” Brothers said. “We’re at a good place because the guys are hungry for better competition and we’re playing the best tennis we’ve had all season at the right time. They are eager to test themselves against the best team we’ve played all season.”

The key to the team’s success in this final go around of the season is the young core stepping up to the plate.

“We have experience in playing in the tournament and against top teams,” graduate Tripp Tuff said to the DePaulia. “We are doing our best to explain to the younger guys what to expect, but also let them know that they should be confident in themselves and the team with all that we have accomplished this year.”

And the younger guys have been paying attention. They have shown that they are more than capable of stepping on the biggest stages, helping win the key matches to secure the conference championship.

But this will be the first time the new members of the Band of Brothers will be participating in the highest realm of collegiate tennis competition, and they plan to use their conference experience to help take them to the next level.

“The older guys have helped us and put us under their wing of profession,” freshman Matteo Iaquinto said. “They helped us overcome some emotions that could have been an obstacle in winning the Big East in the long run. They helped us face the adversities since they have the most experience.”

“When we met the older guys, from day one they set our goal and made it clear that it was to win the Big East championship,” freshman Marino Jakic said. “Every day, they gave us little steps that took us to win the tournament.”

Jakic and Iaquinto both have desires to play professional tennis after their collegiate careers are finished. Playing in this type of environment would not only help them achieve that goal, but also build them up as leaders for the future seasons.

“I [would] like to learn more with this experience now and transfer it to the next freshmen and use it to help develop into a tennis player after college,” Jakic said.

“I’m looking forward to playing a confident match and hopefully showing the next level of tennis I have to win,” Iaquinto said.

The team has been preparing to play the best competition around the world since the conference tournament. The team took two days off after winning the conference championship before getting back into their practice routine, awaiting for direction on their next match. With their next match finally announced, the preparation process has not changed.

“We didn’t make a big deal or overanalyze ahead of the conference final,” Brothers said. “The goal was to approach the match with the same routine and mindset. Our preparation has not changed.”

As the date gets closer for the dance, Brothers remains confident in their opportunity, expressing that he is looking forward to seeing how the young core of the group develops in this tournament.

“My message has always been to strive to go about your time here and not have regrets,” Brothers said prior to the tennis selection show. “Be in the moment, don’t worry about the last point, and don’t have any regrets. The guys are going to be nervous, but they can work through that. I don’t worry about that with these guys. They are confident.

“I feel sorry for the team that draws us in the tournament versus someone who knows they have to play us or along those lines.”